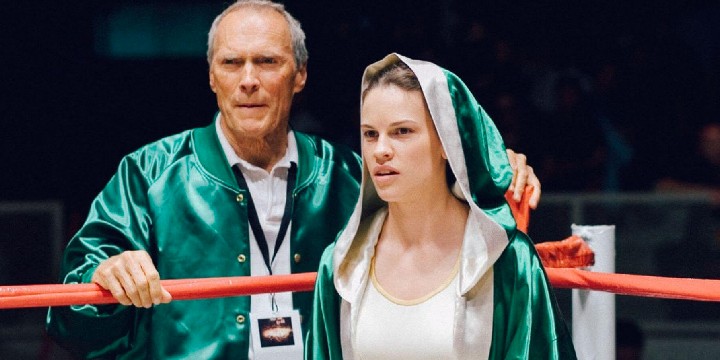 Million Dollar Baby is a sports movie about boxing, underdogs, and perseverance. In it, we get to see boxing trainer, Frankie, help Maggie, an aspiring professional boxer, to win inside the ring. It’s a story of how one should never give up in the face of challenges and how one must prepare for the harsh reality of the world.

Though it’s a boxing movie, Million Dollar Baby is more than about the sport. It’s profound, meaningful, and life-changing. Even just reading this list of its best quotes will set you up for a more empowered point of view.

If you’re ready to train yourself to be the best and win in and outside the ring of life, read on! We’ve rounded up our favorite Million Dollar Baby quotes!

And don’t forget to check out these Little Miss Sunshine quotes and American Beauty quotes.

1. “Boxing is an unnatural act ‘cause everything in it is backward. You wanna move to the left, you don’t step left; you push on the right toe. To move right, you use your left toe. Instead of running from the pain like a sane person would do, you step into it.” – Eddie Dupris

2. “If there’s magic in boxing, it’s the magic of fighting battles beyond endurance, beyond cracked ribs, ruptured kidneys, and detached retinas. It’s the magic of risking everything for a dream that nobody sees but you.” – Eddie Dupris

Eddie Dupris: “You damn right. I found you a fighter. You made her the best fighter she could be.”

Frankie Dunn: “I killed her.”

Eddie Dupris: “Don’t say that. Maggie walked through that door with nothing but guts. No chance in the world of being what she needed to be. It was because of you that she was fighting the championship of the world. You did that. People die every day, Frankie—mopping floors, washing dishes, and you know what their last thought is? I never got my shot. Because of you, Maggie got her shot. If she dies today you know what her last thought would be? I think I did all right.”

5. Maggie Fitzgerald: “Did you see the fight?”

Eddie Dupris: “Of course I did. You had her cold, Maggie.”

6. “Momma, you take Mardell and J.D. and get home ‘fore I tell that lawyer there that you were so worried about your welfare you never signed those house papers like you were supposed to. So anytime I feel like it, I can sell that house from under your fat, lazy, hillbilly *ss. And if you ever come back, that’s exactly what I’ll do.” – Maggie Fitzgerald

7. “Alright. I’m gonna disconnect your air machine, then you’re gonna go to sleep. Then I’ll give you a shot, and you’ll stay asleep. ‘Mo cuishle’ means, ‘My darling, my blood.’” – Frankie Dunn

8. Maggie Fitzgerald: “I’ve got nobody but you, Frankie.”

10. “All fighters are pig-headed in some way or another: some part of them always thinks they know better than you about something. Truth is: even if they’re wrong, even if that one thing is going to be the ruin of them if you can beat that last bit out of them, they ain’t fighters at all.” – Eddie Dupris

11. “Some people say the most important thing a fighter can have is heart. Frankie’d say, ‘Show me a fighter who was nothing but heart, and I’ll show you a man waiting for a beating.” – Eddie Dupris

Frankie Dunn: “Anything you want.”

Maggie Fitzgerald: “Remember what my daddy did for Axel?”

Frankie Dunn: “Don’t even think about that.”

Maggie Fitzgerald: “I can’t be like this, Frankie. Not after what I’ve done. I’ve seen the world. People chanted my name. Well, not my name—some damn name you gave me. But they were chanting for me. I was in magazines. You think I ever dreamed that’d happen? I was born two pounds, one-and-a-half ounces. Daddy used to tell me I’d fight my way into this world, and I’d fight my way out. That’s all I wanna do, Frankie. I just don’t wanna fight you to do it. I got what I needed. I got it all. Don’t let ’em keep taking it away from me. Don’t let me lie here ’till I can’t hear those people chanting no more.”

13. “Frankie likes to say that boxing is an unnatural act, that everything in boxing is backward. Sometimes, the best way to deliver a punch is to step back. But step back too far, and you ain’t fighting at all.” – Eddie Dupris

14. “To make a fighter, you got to strip them down to bare wood. You can’t just tell them to forget everything you know, you got to make them forget it in their bones. Make them so tired they only listen to you, only hear your voice, only do what you say and nothing else. Show them how to keep their balance and take it away from the other guy. How to generate momentum off your right toe, and how to flex your knees when you fire a jab. How to fight backing up, so that the other guy doesn’t want to come after you. Then you got to show them all over again. Over and over and over, till they think they were born that way.” – Eddie Dupris

Maggie Fitzgerald: “Keep my left up?”

Frankie Dunn: “Is to protect yourself at all times. Now, what is the rule?”

Maggie Fitzgerald: “Protect myself at all times.”

16. “Everybody’s got a particular number of fights in them. Nobody tells you what that number is.” – Eddie Dupris

17. “The body knows what fighters don’t: how to protect itself. A neck can only twist so far. Twist it just a hair more, and the body says, ‘Hey, I’ll take it from here because you obviously don’t know what you’re doing. Lie down now, rest, and we’ll talk about this when you regain your senses.’ It’s called the knockout mechanism.” – Eddie Dupris

18. “People love violence. They’ll slow down at a car wreck to check for bodies. Some people claim to love boxing. They got no idea what it is. Boxing is about respect. Getting it for yourself, and taking it away from the other guy.” – Eddie Dupris

19. “Some wounds are too deep or too close to the bone. And no matter how hard you work at it, you just can’t stop the bleeding.” – Eddie Dupris

Maggie Fitzgerald: “What’d I do wrong?”

Frankie Dunn: “You know why that is?”

Frankie Dunn: “‘Cause she’s a better fighter than you are, that’s why. She’s younger, she’s stronger, and she’s more experienced. Now, what are you gonna do about it?”

Frankie Dunn: “This is my fighter.”

Father Horvak: “Frankie, most people figure out by kindergarten, it’s about faith.”

Frankie Dunn: “Is it sort of like Snap, Crackle, and Pop, all rolled into one big box?”

Father Horvak: “You’re standing outside my church, comparing God to Rice Krispies? The only reason you can romance at me is to wind me up. It’s not gonna happen this morning.”

Father Horvak: “Then here’s your answer: there’s one God. Anything else? Because I’m busy.”

Frankie Dunn: “What about the Holy Ghost?”

Frankie Dunn: “So, is Jesus a demigod?”

Father Horvak: “There are no demigods, you f*cking pagan!”

25. Frankie Dunn: “I swear to God, Father, it’s committing a sin by doing it. By keeping her alive, I’m killing her. Do you know what I mean? How do I get around that?”

Father Horvak: “You don’t. You step aside, Frankie. You leave her with God.”

Frankie Dunn: “She’s not asking for God’s help. She’s asking for mine.”

Father Horvak: “Frankie, I’ve seen you at Mass almost every day for 23 years. The only person who comes to church that much is the kind who can’t forgive himself for something. Whatever sins you’re carrying, they’re nothing compared to this. Forget about God or heaven and hell. If you do this thing, you’ll be lost. Somewhere so deep you’ll never find yourself again.”

Frankie Dunn: “I think I did it already.”

What Is the Most Empowering Piece of Advice You Got From Million Dollar Baby?

Most movies capitalize on just one moral lesson, not Million Dollar Baby. It packs many relevant and life-changing morals that one post is not enough to cover. However, the most important ones may be learning to face life’s reality, grabbing opportunities, and taking a leap of faith.

Since we were kids, we were taught to be kind and to learn how to accept others’ criticisms. But why should we do that, and why should we stick with that if we’re getting hurt? So, like Frankie’s advice, learn to protect yourself first.

Life also rarely gives us opportunities to reach for our dreams. So, if you’re given a glimmer of hope, grab onto it immediately. Don’t be idle; fight for what you want so you won’t regret it later!

Lastly, always be brave enough to take a leap of faith! You can find many excuses not to pursue what makes your heart leap with joy. But, dare to explore the unknown; it will lead you to a full and happy life.

Million Dollar Baby is a movie that transcends lessons on sports. So, keep this list in your bookmarks, as it has all the advice you need for life!