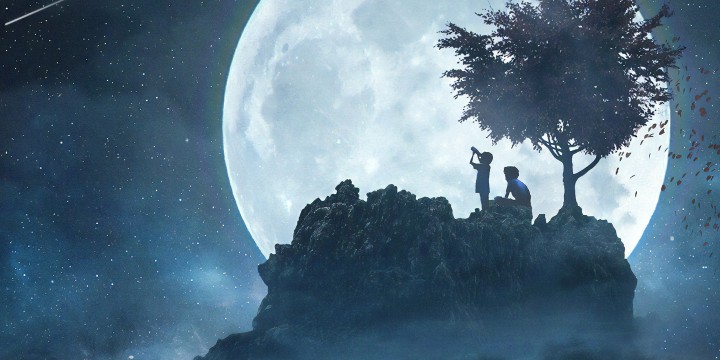 These moon quotes will alter your perception of beauty and motivate you to persevere despite your flaws.

It is no secret that the moon does not produce its own light and instead reflects light from the sun. However, this flaw does not prevent the moon from brightening our nights and guiding us on our journey.

This goes without saying, but despite the moon’s flaws, it still finds a way to light our paths and be stunning in its own right.

Here are some of the best quotes that’ll show you how your flaws and unique traits can help carve your way toward your life’s purpose, just like the moon!

And make sure to read these night sky quotes and galaxy quotes.

1. “Don’t worry if you’re making waves just by being yourself. The moon does it all the time.” – Scott Stabile

2. “Everyone is a moon, and has a dark side which he never shows to anybody.” – Mark Twain

3. “The moon is the first milestone on the road to the stars.” – Arthur C. Clarke

4. “It is a beautiful and delightful sight to behold the body of the moon.” – Galileo Galilei

5. “But even when the moon looks like it’s waning―it’s actually never changing shape. Don’t ever forget that.” – Ai Yazawa

6. “The moon is faithful to its nature and its power is never diminished.” – Deng Ming-Dao

7. “Always remember we are under the same sky, looking at the same moon.” – Maxine Lee

8. “The moon is a friend for the lonesome to talk to.” – Carl Sandburg

9. “The moon will guide you through the night with her brightness, but she will always dwell in the darkness, in order to be seen.” – Shannon L. Alder

Moon Quotes to Motivate You to Achieve Your Goals

10. “Shoot for the moon. Even if you miss it you will land among the stars.” – Les Brown

11. “Don’t tell me the sky’s the limit when there are footprints on the moon.” – Paul Brandt

12. “We are going to the moon that is not very far. Man has so much farther to go within himself.” – Anaïs Nin

14. “Smile like the moon to make life beautiful, because in your beautiful smile life finds meaning.” – Debasish Mridha

15. “The moon does not fight. It attacks no one. It does not worry. It does not try to crush others. It keeps to its course, but by its very nature, it gently influences.” – Deng Ming-Dao

16. “Do not swear by the moon, for she changes constantly. then your love would also change.” – William Shakespeare

17. “The sun loves the moon so much that he dies every night to let her breathe, and in return, she reflects his love.” – Jeffrey Fry

18. “If someday the moon calls you by your name don’t be surprised, because every night I tell her about you.” – Shahrazad al-Khalij

19. “The moon is the reflection of your heart, and moonlight is the twinkle of your love.” – Debasish Mridha

21. “I’d rather live in a world where I get to love the moon than in one where I don’t, even if the moon won’t return the feeling.” – Alex London

22. “Be like the moon in someone’s sky and show her the way of life with your loving silvery lights during the darkness.” – Debasish Mridha

23. “The moon is beautiful only when the mind is seeking beauty and the heart is loving.” – Debasish Mridha

24. “I like to think that the moon is there, even if I am not looking at it.” – Albert Einstein

25. “It is no secret that the moon has no light of her own but is, as it were, a mirror, receiving brightness from the influence of the sun.” – Vitruvius

27. “The moon in all her immaculate purity hung in the sky, laughing at this world of dust. She congratulated me for my carefully considered maneuvers and invited me to share in her eternal solitude.” – Shan Sa

28. “The moon is a loyal companion. It never leaves. It’s always there, watching, steadfast, knowing us in our light and dark moments, changing forever just as we do. Every day it’s a different version of itself. Sometimes weak and wan, sometimes strong and full of light. The moon understands what it means to be human. Uncertain. Alone. Cratered by imperfections.” – Tahereh Mafi

29. “The moon puts on an elegant show, different every time in shape, color, and nuance.” – Arthur Smith

30. “The moon was so beautiful that the ocean held up a mirror.” – Ani DiFranco

31. “The beautiful moon is an antidepressant. Love for her light is in every heart because she is so friendly, loving, and forgiving.” – Debasish Mridha

32. “The moon stared at me through sprinkled nighttime stardust and I alone smile.” – Jay Long

33. “The moon can never breathe, but it can take our breath away with the beauty of its cold, arid orb.” – Munia Khan

34. “When we are looking at the moon, we see the purest reflection of our own beauty and magic, which is why we love the moon so much.” – Debasish Mridha

35. “I can feel the moon’s love for the Earth in my soul when its magical silent silvery light touches my heart.” – Debasish Mridha

36. “The moon, like a flower in Heaven’s high bower, with silent delight, sits and smiles on the night.” – William Blake

37. “There is something haunting in the light of the moon. It has all the dispassionateness of a disembodied soul and something of its inconceivable mystery.” – Joseph Conrad

38. “The moon affects people in other ways, for a beautiful crescent suspended in a twilit sky can stir our hearts.” – Ken Croswell

43. “The moon fascinates us in her simplicity.” – Avijeet Das

Moon Quotes for Her

44. “I feel like the moon is a very beautiful woman. She’s in control.” – Ravyn Lenae

45. “She is twice as beautiful as the moon and all of the stars together.” – Giovannie de Sadeleer

46. “She and the moon could always be found playing in the darkness.” – A.J. Lawless

47. “If I tell you there’s cheese on the moon, bring the crackers.” – Tyronn Lue

48. “The moon is opposing Jupiter. Don’t get involved—it’s their problem.” – James H. Critchfield

49. “There is no dark side of the moon really. Matter of fact it’s all dark.” – Pink Floyd

50. “Don’t tell me the moon is shining; show me the glint of light on broken glass.” – Anton Chekhov

Do You Ever Look at the Moon and Become Enchanted by Its Beauty?

Despite the moon’s undeniable beauty, it is also an excellent motivator for anyone feeling down. Simply looking at the moon will make you feel inspired, as if there is something about it that charges your lost energy.

The moon is not perfect; in fact, it has many flaws. However, despite the odds, it found a way to collaborate with the sun and stars to show her beauty and shine on her own.

Which of these moon quotes made you want to embrace your flaws and shine brighter? Do you enjoy gazing at the moon? Join the discussion below!