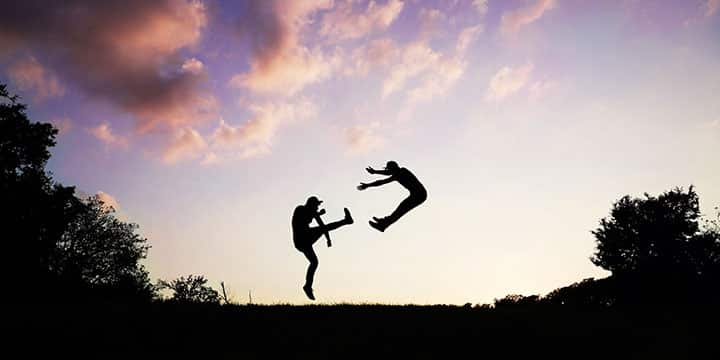 Let these fighting quotes encourage you to hold the line and do your best to achieve what you want in life.

It’s been said many times before that life will not hand you things you desire on a silver platter. Instead, people must fight for what they want, and sometimes, even what they deserve.

But, keep in mind that fighting without planning or thinking about the consequences will lead to your downfall. There are fights worth fighting, and there are some that aren’t.

Before committing to the challenge, we must discern whether what we’re facing is worth our time and effort.

So, to help you weigh out your options, we’ve prepared a list of the most insightful fighting quotes. Scroll through to the end and find some lessons worth applying in your life.

1. “Don’t fight a battle if you don’t gain anything by winning.” – George S. Patton

3. “You will never be entirely comfortable. This is the truth behind the champion—he is always fighting something. To do otherwise is to settle.” – Julien Smith

7. “The key to fighting is not being the fastest or strongest, it is about balance. A warrior must always keep his balance.” – Joaquin Lopez

8. “I love fighting for what I believe in. I love having fun while doing it.” – Andrew Breitbart

9. “If you can’t go back to your mother’s womb, you’d better learn to be a good fighter.” – Anchee Min

10. “Life is a fight for territory; so is your success.” – Nkem Mpamah

11. “You must not fight too often with one enemy, or you will teach him all your art of war.” – Napoleon Bonaparte

12. “There’s a moment in fighting when the strength of muscle ain’t everything because the enemy has already given you enough energy to gain the victory.” – Toba Beta

13. “Fighting is essentially a masculine idea; a woman’s weapon is her tongue.” – Hermione Gingold

Fighting Quotes That’ll Inspire You to Persevere in Life

17. “Fearless is getting back up and fighting for what you want over and over again—even though every time you’ve tried before you’ve lost.” – Taylor Swift

19. “Part of the happiness of life consists not in fighting battles, but in avoiding them. A masterly retreat is in itself a victory.” – Norman Vincent Peale

21. “We’re fighting to be ourselves in a world that’s trying to make us like everyone else.” – Bebe Rexha

22. “Never stop fighting until you arrive at your destined place—that is, the unique you. Have an aim in life, continuously acquire knowledge, work hard, and have the perseverance to realize the great life.” – A. P. J. Abdul Kalam

23. “As we advance in life it becomes more and more difficult, but in fighting the difficulties the inmost strength of the heart is developed.” – Vincent van Gogh

24. “You’ve got keep your head up, keep fighting, and do the best you can.” – Pablo Sandoval

26. “Either you give in, or you fight. That’s all I know, being where I’m from. You fight for what you want. You go after what you want.” – Allen Iverson

28. “To be nobody but yourself in a world which is doing its best, night and day, to make you everybody else means to fight the hardest battle which any human being can fight, and never stop fighting.” – E. E. Cummings

29. “Victory is always possible for the person who refuses to stop fighting.” – Napoleon Hill

30. “That is the whole secret of successful fighting. Get your enemy at a disadvantage; and never, on any account, fight him on equal terms.” – George Bernard Shaw

31. “If you’re going to fight, then fight until the end; fight to come out on top. You’re already lucky because you’re human.” – Great IGWE

32. “You may have to fight a battle more than once to win it.” – Margaret Thatcher

Fighting Quotes About Grit and Determination

35. “Whether fighting or spitting, my discipline is unforgiving!” – John Cena

36. “I want to be an expert in different fighting styles, new training methods, new ways of thinking.” – Conor McGregor

37. “Every soldier must know, before he goes into battle, how the little battle he is to fight fits into the larger picture, and how the success of his fighting will influence the battle as a whole.” – Bernard Law Montgomery

38. “The greatest fight is when you are fighting in the smoke and cannot see with your eyes.” – Mark Helprin

39. “Just dream big. Go for it. There’s nothing holding you back. You can have ups and downs, but if you believe in something, keep the faith; keep fighting. And don’t let people put you down.” – Geraint Thomas

42. “No battle is worth fighting except the last one.” – Enoch Powell

44. “A real fighter works on his or her inner peace and balance.” – Arnaud van der Veere

45. “If you kill enough of them, they stop fighting.” – Curtis LeMay

Fighting Quotes Everyone Needs to Read

47. “Fighting, for me, is like skydiving without the parachute.” – Anderson Silva

48. “When you put on clothes that are fighting against something, you can feel your courage grow. Clothing can set you free.” – Rei Kawakubo

49. “The fight is won or lost far away from witnesses​​—behind the lines, in the gym, and out there on the road, long before I dance under those lights.” – Muhammad Ali

51. “A dream you don’t have to fight for isn’t a dream—it’s a nap. One changes your afternoon. The other changes your world. Keep fighting.” – Jon Acuff

52. “It seems that fighting is a game where everybody is the loser.” – Zora Neale Hurston

53. “Fighting is one of those things that gets tons of attention, far more than it deserves.” – Gary Bettman

54. “The road to hell was paved with the bones of men who did not know when to quit fighting.” – Paulette Jiles

55. “The world is a fine place and worth fighting for and I hate very much to leave it.” – Ernest Hemingway

Fighting Quotes That Talk About Its Negative Effects

57. “There was no such thing as a fair fight. All vulnerabilities must be exploited.” – Cary Caffrey

58. “Fighting is like champagne. It goes to the heads of cowards as quickly as of heroes. Any fool can be brave on a battlefield when it’s be brave or else be killed.” – Margaret Mitchell

59. “Whoever fights monsters should see to it that in the process he does not become a monster. And if you gaze long enough into an abyss, the abyss will gaze back into you.” – Friedrich Nietzsche

Relatable Fighting Quotes for Those in Relationships

60. “The only kind of love worth having is the kind that goes on living and laughing and fighting and loving.” – Dalton Trumbo

61. “I’ve been fighting to be who I am all my life. What’s the point of being who I am, if I can’t have the person who was worth all the fighting for?” – Stephanie Lennox,

62. “Fighting bitterness can be a full-time job.” – Ira Sachs

64. “I see couples fighting about the stupidest things. You just have to rise above everything.” – Sammy Hagar

Fighting Quotes on How It Affects Others

65. “The fight is never about grapes or lettuce. It is always about people.” – Cesar Chavez

66. “Older men declare war. But it is youth that must fight and die.” – Herbert Hoover

67. “There are no pleasures in a fight but some of my fights have been a pleasure to win.” – Muhammad Ali

69. “Even good people make a lot of mistakes or get weak and fall from grace, but we must never give up the fight.” – Dr. Samuel White

70. “What has mood to do with it? You fight when the necessity arises—no matter the mood! Mood’s a thing for cattle or making love or playing the baliset. It’s not for fighting.” – Frank Herbert

What Do You Get Out of Fighting?

Having the determination and grit to continue fighting is good. However, let us all remember that the ability to decide whether or not a cause is worth fighting for is equally essential for us to win in any particular situation.

Every day, we fight for life, our rights, our happiness, and love. These are causes worth fighting for. There’s no contesting how difficult each day will be, but we must muster the courage to continue and keep going.

Although this is the case, when faced with a lost cause, let us weigh our options and see how we should react to things. Fighting is not always about the physical. Sometimes, your silence is enough of a fight and a stand.

This is easy to say but hard to apply when you’re actually in that situation. So, we hope this list of the best fighting quotes was able to guide you on what you should do. When faced with a difficult choice, go through this list again and be inspired to do the right thing.

Are you willing to fight for what you want? What other lessons did you learn from this collection of fighting quotes? Please, share your thoughts with us by commenting below!