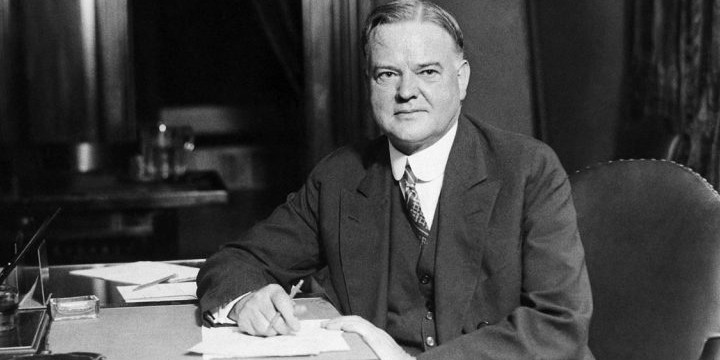 If you’ve ever wondered what it was like to live during the Great Depression, then these Herbert Hoover quotes are great time capsules that will give you a glimpse of history.

This is the ultimate collection of his best quotes that show how he used the misfortune of being the President during the Great Depression as a leverage point to succeed—by striving to come up with new policies and regulations that will contribute to the progress of society.

Continue reading to find out more.

And don’t forget to check out these Lyndon Johnson quotes and Thomas Jefferson quotes.

1. “Children are our greatest natural resource.”

2. “America—a great social and economic experiment, noble in motive, and far-reaching in purpose.”

5. “Older men declare war, but it is youth that must fight and die.”

6. “Doctors think a lot of patients are cured who have simply quit in disgust.”

7. “The only problem with capitalism is the capitalists.”

8. “Blessed are the young, for they shall inherit the national debt.”

10. “Fishing is much more than fish. It is the great occasion when we may return to the fine simplicity of our forefathers.”

11. “My country owes me nothing. It gave me, as it gives every boy and girl, a chance. It gave me schooling, independence of action, opportunity for service and honor.”

12. “Words without actions are the assassins of idealism.”

13. “There are things in the world that cannot be brought about. There are mistakes that cannot be repaired. But there is one thing sure—that loyalty and friendship are the most precious possessions a man can have.”

14. “I’m the only person of distinction who’s ever had a depression named after him.”

15. “About the time we think we can make ends meet, somebody moves the ends.”

17. “Economic depression can not be cured by legislative action or executive pronouncement.”

18. “Men must be what they were made by the Almighty, or the American people will find them out in time.”

19. “We have gold because we cannot trust governments.”

20. “I am sure I’d have made a better all-around man if I hadn’t lost so much time just making a living.”

21. “There are some principles that cannot be compromised.”

22. “Either we shall have a society based upon ordered liberty and the initiative of the individual, or we shall have a planned society that means dictation no matter what you call it or who does it. There is no half-way ground. They cannot be mixed.”

23. “Sportsmanship, next to the church, is the greatest teacher of morals.”

24. “Next to prayer, fishing is the most personal relationship of man.”

25. “We are in danger of developing a cult of the common man, which means a cult of mediocrity.”

26. “Love what is ahead by loving what has come before.”

27. “Children are the most wholesome part of the race—the sweetest, for they are the freshest from the hand of god.”

28. “Honest difference of views and honest debate are not disunity. They are the vital process of policy among free men.”

29. “Freedom is the open window through which pours the sunlight of the human spirit and human dignity.”

31. “A good many things go around in the dark besides Santa Claus.”

32. “Peace is not made at the council table or by treaties, but in the hearts of men.”

34. “The worst evil of disregard for some law is that it destroys respect for all laws.”

35. “Honor is not the exclusive property of any political party.”

36. “National character cannot be built by law. It is the sum of the moral fiber of its individuals.”

37. “I come from Quaker stock. My ancestors were persecuted for their beliefs. Here, they sought and found religious freedom. By blood and conviction, I stand for religious tolerance both in act and in spirit.”

Herbert Hoover Quotes on the Revolution and the Government

40. “One has to bear in mind that one of the tactics of revolution is to destroy one’s predecessors in authority at any cost or hazard.”

41. “The wreckage of representative government is strewn with broken promises.”

42. “Being a politician is a poor profession. Being a public servant is a noble one.”

43. “When there is a lack of honor in government, the morals of the whole people are poisoned.”

44. “Bureaucracy is ever desirous of spreading its influence and its power.”

45. “You cannot extend the mastery of the government over the daily working life of a people without at the same time making it the master of the people’s souls and thoughts.”

46. “It is a paradox that every dictator has climbed to power on the ladder of free speech. Immediately, on attaining power, each dictator has suppressed all free speech except his own.”

47. “A splendid storehouse of integrity and freedom has been bequeathed to us by our forefathers. In this day of confusion, of peril to liberty, our high duty is to see that this storehouse is not robbed of its contents.”

49. “The sole function of the government is to bring about a condition of affairs favorable to the beneficial development of private enterprise.”

50. “Twenty million people are starving. Whatever their politics, they shall be fed!”

51. “The use of the atomic bomb, with its indiscriminate killing of women and children, revolts my soul.”

52. “Every collectivist revolution rides in on a Trojan horse of emergency.”

53. “Prosperity cannot be restored by raids upon the public Treasury.”

54. “The spark of liberty in the mind and spirit of man cannot be long extinguished; it will break into flames that will destroy every coercion which seems to limit it.”

55. “We must not be misled by the claim that the source of all wisdom is in the government.”

56. “The fundamental business of the country, that is production and distribution of commodities, is on a sound and prosperous basis.”

57. “We have learned that social injustice is the destruction of justice itself.”

58. “Freedom requires that the government keeps the channels of competition and opportunity open, prevents monopolies, economic abuse, and domination.”

59. “Free speech does not live many hours after free industry and free commerce die.”

Herbert Hoover Quotes on America and the Economy

60. “We in America today are nearer to the final triumph over poverty than ever before.”

61. “There is no economic failure so terrible in its import as that of a country possessing a surplus of every necessity of life in which numbers willing and anxious to work, are deprived of dire necessities. It simply cannot be if our moral and economic system is to survive.”

62. “We have used the credit of the government to aid and protect our institutions, both public and private. We have provided methods and assurances that none suffer from hunger or cold amongst our people. We have instituted measures to assist our farmers and our homeowners. We have created vast agencies for employment.”

63. “Competition is not only the basis of protection to the consumer, but is the incentive to progress.”

64. “Prosperity is just around the corner.”

65. “Engineering training deals with the exact sciences. That sort of exactness makes for truth and conscience. It might be good for the world if more men had that sort of mental start in life even if they did not pursue the profession.”

66. “If we could have but one generation of properly born, trained, educated, and healthy children, a thousand other problems of government would vanish.”

67. “The whole inspiration of our civilization springs from the teachings of Christ and the lessons of the prophets. To read the Bible for these fundamentals is a necessity of American life.”

68. “Our individualism is rooted in our very nature. It is based on conviction born of experience.”

69. “Equal opportunity—the demand for a fair chance—became the formula of American Individualism because it is the method of American achievement.”

70. “Absolute freedom of the press to discuss public questions is a foundation stone of American liberty.”

71. “We are now speeding down the road of wasteful spending and debt, and unless we can escape, we will be smashed in inflation.”

74. “No great question will ever be settled in dollars and cents. Great questions must be settled on moral grounds and the tests of what makes free men.”

75. “Economic wounds must be healed by the action of the cells of the economic body—the producers and consumers themselves.”

76. “Gentleman, you have come sixty days too late. The depression is over.”

77. “The course of unbalanced budgets is the road to ruin.”

78. “The basis of successful relief in national distress is to mobilize and organize the infinite number of agencies of self help in the community—that has been the American way.”

79. “The people have a vital interest in the conservation of their natural resources—in the prevention of wasteful practices.”

80. “Engineering is a great profession.”

81. “When the outcome of a meeting is to have another meeting, it has been a lousy meeting.”

82. “The gods do not deduct from man’s allotted span the hours spent in fishing.”

83. “Engineering without imagination sinks to a trade.”

85. “The supreme purpose of history is a better world.”

86. “To the engineer falls the job of clothing the bare bones of science with life, comfort, and hope.”

87. “It is obvious that while science is struggling to bring Heaven to earth, some men are using its materials in the construction of Hell.”

88. “Never worry about anything that is past. Charge it up to experience and forget the trouble. There are always plenty of troubles ahead, so don’t turn and look back on any behind you.”

90. “Truth alone can stand the guns of criticism.”

91. “New discoveries in science will continue to create a thousand new frontiers for those who still would adventure.”

92. “The imperative need of this nation at all times is the leadership of uncommon men or women.”

93. “The slogan of progress is changing from the full dinner pail to the full garage.”

94. “The advancement of knowledge must be translated into increasing health and education for the children.”

95. “No public man can be just a little crooked. There is no such thing as a no-man’s land between honesty and dishonesty.”

96. “Children add to the wonder of being alive.”

97. “The structure of human betterment cannot be built upon foundations of materialism or business, but upon the bedrock of individual character in free men and women.”

98. “The rigid volunteer rules of right and wrong in sports are second only to religious faith in moral training.”

99. “I am convinced that through these measures we have reestablished confidence.”

100. “There is no more cruel illusion than that war makes people richer.”

Did These Herbert Hoover Quotes Motivate You to Overcome Every Challenge You Face?

The Great Depression was one of the hardest times in history. However, that doesn’t mean one should stop fighting. Even today, when we face hardships, it doesn’t mean we should let go of our dreams.

Every challenge is a chance for us to improve ourselves and is a step closer to our goals. Through Herbert Hoover, we learn that what’s important is to respond to those challenges and always be determined to push through and succeed.

Which Herbert Hoover quotes are your favorites? Which ones showed you a glimpse of what it was like during the Great Depression? Share your thoughts with us through the comments section below.