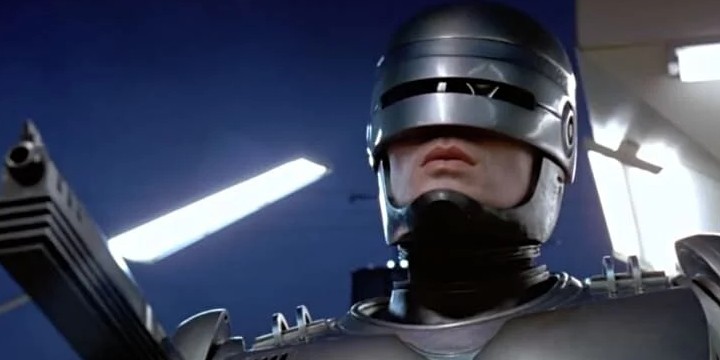 Read these RoboCop quotes and learn more about the law, one’s morals, and the power of technology!

RoboCop is a 1987 American science fiction movie set in Detroit, where there is a high incidence of criminal activity. To make better police officers, a corporation wants to privatize the police force and combine robotics with the human brain.

To do so, they set up street cop, Alex Murphy, in a fight where he lost parts of his body and used the remains to construct the first “RoboCop.” Later in the movie, RoboCop learns of the company’s evil plans to overthrow the current government and control every aspect of the city.

Although it is an action movie, it is also filled with meaningful lines and hilarious quotes! So, we’ve created this list of quotes to entertain and intrigue you!

And make sure to read these Blade Runner quotes and Terminator quotes.

1. “Excuse me, I have to go. Somewhere there is a crime happening.” – RoboCop

2. Bob Morton: “What are your prime directives?”

3. “My friends call me Murphy. You call me—RoboCop.” – RoboCop

4. Reporter: “Robo, excuse me, Robo! Any special message for all the kids watching at home?”

RoboCop: “Stay out of trouble.”

6. “These days, neighborhoods just seem to be the sort of places where bad things happen. Don’t be nostalgic.” – The Old Man

7. “Role models can be very important to a boy.” – RoboCop

9. Prisoner: “Now, I am—I am what you call a repeat offender. I repeat, I will offend again! I get my orders from a higher source.”

10. Clarence Boddicker: “Do you have access to military weaponry?”

Dick Jones: “We practically are the military.”

Short RoboCop Quotes and One-Liners That You Should Read

RoboCop Quotes to Make You Laugh

19. Clarence Boddicker: “You probably don’t think I’m a very nice guy, do ya?”

20. “I had a guaranteed military sale with ED-209! Renovation program! Spare parts for 25 years! Who cares if it worked or not?” – Dick Jones

21. “Your client’s a scumbag, you’re a scumbag, and scumbags see the judge on Monday morning. Now get out of my office, and take the laughing boy with you!” – Sgt. Warren Reed

Roosevelt: “The digestive system is extremely simple. This processor dispenses a rudimentary paste that sustains his organic systems.”

Bob Morton: “Knock yourself out.”

RoboCop Quotes That Policemen Can Relate To

24. “Every policeman knows when he joins the force that there are certain inherent risks that come with the territory. Ask any cop, he’ll tell ya, ‘If you can’t stand the heat, you better stay out of the kitchen.’” – Dick Jones

Dick Jones: “I think you’d better do what he says, Mr. Kinney.”

Deep RoboCop Quotes That Will Make You Think

26. “You want to take him offline because he had a dream? What? Are you kidding?” – Bob Morton

27. “It’s a free society—except there ain’t nothin’ free because there are no guarantees, you know? You’re on your own. It’s the law of the jungle. Hoo-hoo.” – Keva Rosenberg Unemployed Person

29. “You know what the real tragedy is, Bob? We could have been friends. But you wouldn’t go through other channels. You went over my head. That hurt. But life goes on, all fun and glory, huh Bob? It helps if you think of it as a game. And every game’s got a winner and a loser. I’m cashing you out, Bob.” – Dick Jones

30. “Congratulations, Bob. I remember when I was a young executive at this company. We used to call the old man funny names—but there was always respect. I always knew where the line was drawn, and you just stepped over it, buddy-boy. You’ve insulted me, and you’ve insulted this company.” – Dick Jones

How Important Is It to Uphold the Law and the Right Morals?

Cops protect the public, but it is our responsibility to comply and conform to the law. If more people are disobedient than the ones who are not, this will cause complete chaos.

In the movie, the high crime rate in Detroit led to the creation of the first RoboCop. He may have been a half cyborg or a machine. However, Alex Murphy hasn’t lost all of his humanity; he regained some memories and understood that he needed to start at the root to eradicate crime.

More than this, RoboCop also allows us to better understand how ruthless corrupt people could be. On the surface, they might seem magnanimous and generous. But, as we’ve seen in the movie, they could also be plotting things that would not benefit society as a whole.

With that, we hope these RoboCop quotes we’ve compiled were able to inspire you and make you laugh. Remember, the goodness of the world will start with you. So do good, no matter what!