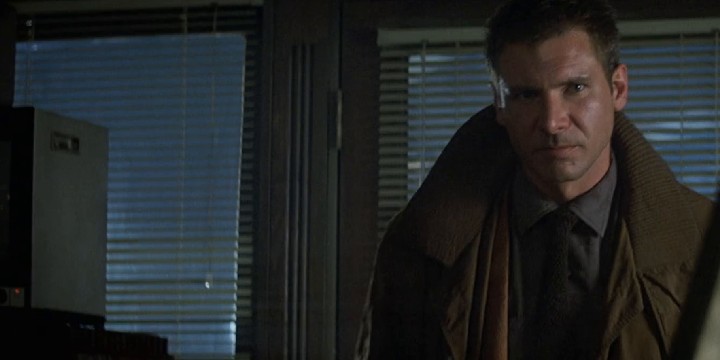 If you’re a fan of Harrison Ford and want to revisit some of his classics, read these Blade Runner quotes we’ve collected!

Blade Runner is one of the most iconic science fiction movies ever released. It is set in the future of 2019 when humanoid androids known as “Replicants” existed. These humanoids were bio-engineered by the Tyrell Corporation for slave labor in space colonies.

Seeking to extend their lifespans, a team of these Replicants escaped from outer space and took refuge on Earth. Ex-detective Rick Deckard was tasked to track down and terminate this team. During his search, he falls in love with a Replicant that seems to have thoughts and emotions like a human being.

Dive deep into this list of Blade Runner quotes and remind yourself that to feel is human. Read through to the end and understand that our emotions are precious gifts that make us who we are!

And don’t miss out these RoboCop quotes and Starship Troopers quotes.

1. “Our lives mean nothing next to a storm that’s coming. Dying for the right cause. It’s the most human thing we can do.” – Freysa Sadeghpour

3. Dr. Eldon Tyrell: “The light that burns twice as bright burns half as long—and you have burned so very, very brightly, Roy. Look at you: you’re the prodigal son; you’re quite a prize!”

Roy Batty: “Nothing the god of biomechanics wouldn’t let you into heaven for.”

4. “Not very sporting to fire on an unarmed opponent. I thought you were supposed to be good. Aren’t you the ‘good’ man?” – Roy Batty

5. “The world is built in a wall that separates kind. Tell either side there’s no wall, you’ve bought a war. Or a slaughter.” – Lieutenant Joshi

9. Dr. Eldon Tyrell: “We began to recognize in them a strange obsession. After all, they are emotionally inexperienced, with only a few years in which to store up the experiences which you and I take for granted. If we gift them with a past, we create a cushion or a pillow for their emotions, and consequently, we can control them better.”

10. “They all think it’s about more detail. But that’s not how memory works. We recall with our feelings. Anything real should be a mess.” – Dr. Ana Stelline

12. “I have had people walk out on me before, but not when I was being so charming.” – Rick Deckard

13. “I’ve seen things you people wouldn’t believe. Attack ships on fire off the shoulder of Orion. I watched C-beams glitter in the dark near the Tannhauser gate. All those moments will be lost in time—like tears in the rain—time to die.” – Roy Batty

14. “Fiery the angels fell. Deep thunder rolled around their shoulders—burning with the fires of Orc.” – Roy Batty

Rachael: “Have you ever retired a human by mistake?”

Rachael: “But in your position, that is a risk.”

Rachael: “Of course it is.”

Rick Deckard: “Must be expensive.”

Rachael: “It seems you feel our work is not a benefit to the public.”

Rick Deckard: “Replicants are like any other machine—they’re either a benefit or a hazard. If they’re a benefit, it’s not my problem.”

Dave Holden: “Maybe you’re fed up. Maybe you want to be by yourself. Who knows? You look down and see a tortoise, Leon. It’s crawling toward you—.”

Dave Holden: “You know what a turtle is?”

Leon Kowalski: “I’ve never seen a turtle—but I understand what you mean.”

Dave Holden: “You reach down, and you flip the tortoise over on its back, Leon.”

Leon Kowalski: “Do you make up these questions, Mr. Holden? Or do they write ’em down for you?”

Dave Holden: “The tortoise lays on its back, its belly baking in the hot sun, beating its legs trying to turn itself over, but it can’t. Not without your help. But you’re not helping.”

Leon Kowalski: “What do you mean I’m not helping?”

Dave Holden: “I mean: you’re not helping! Why is that, Leon? They’re just questions, Leon. In answer to your query, they’re written down for me. It’s a test designed to provoke an emotional response—shall we continue?”

Dr. Eldon Tyrell: “I’m impressed. How many questions does it usually take to spot them?”

Dr. Eldon Tyrell: “How many questions?”

Dr. Eldon Tyrell: “It took more than a hundred for Rachael, didn’t it?”

Rick Deckard: “Suspect? How can it not know what it is?”

Blade Runner Quotes That Zoom in on Fear and Pain

22. “It’s fascinating. Before we even know what we are, we fear to lose it.” – Niander Wallace

24. “Pain reminds you the joy you felt was real. More joy, then! Do not be afraid.” – Niander Wallace

26. “I don’t know why he saved my life. Maybe in those last moments, he loved life more than he ever had before. Not just his life—anybody’s life, my life. All he’d wanted were the same answers the rest of us want. Where did I come from? Where am I going? How long have I got? All I could do was sit there and watch him die.” – Rick Deckard

27. Dr. Eldon Tyrell: “The facts of life—to make an alteration in the evolvement of an organic life system is fatal. A coding sequence cannot be revised once it’s been established.”

Dr. Eldon Tyrell: “Because by the second day of incubation, any cells that have undergone reversion mutation give rise to revertant colonies, like rats leaving a sinking ship; then the ship—sinks.”

Blade Runner Quotes for All the Romantics

28. “Sometimes to love someone, you got to be a stranger.” – Rick Deckard

Rick Deckard: “Do you trust me?”

Rick Deckard: “No—no, I wouldn’t. I owe you one—but somebody would.”

Are You Someone Who Gets Lost in Your Emotions?

In our world today, some people tend to forget to consider other people’s feelings. They forget that we are only humans who feel and are sensitive.

A lot of people also hide their emotions because of fear of judgment. This somehow causes us to want to switch off anything that we feel. How dull our lives would be if that’s the case!

Blade Runner has shown us how valuable it is to be a human and that everything we feel is valid. Let’s cherish every second because, as said in the movie, “All of those moments will be lost in time—like tears in the rain.”

We hope this list of quotes was able to inspire you in some way. Keep in mind that there is beauty in being human, and life itself is beautiful. So, instead of suppressing our feelings, let us embrace our humanness and live every moment!