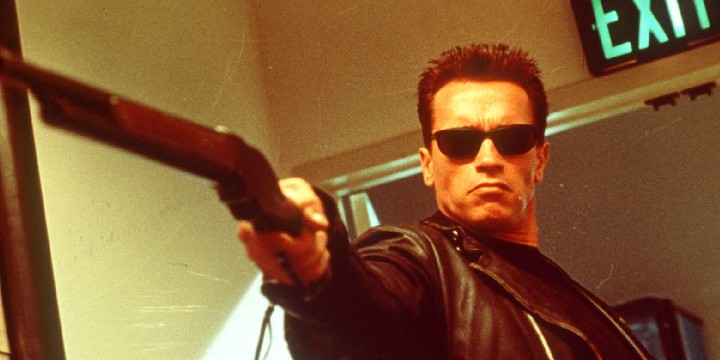 Allow these Terminator quotes to take you to a world of advanced technology and educate you on life, the future, bravery, and leadership.

Terminator is a sci-fi franchise that covers a wide range of media.

There are movies, a television show, novels, games, and merchandise under its name.

Looking at it on the surface, you may think that it’s your usual action-packed movie.

But, it also reveals a bunch of life lessons and some profoundly emotional scenes as the story progresses.

You’ll never run out of things to love with this franchise!

So, if you want to revisit some of your favorite scenes and lines, make sure to read the complete list below.

And don’t forget to check out these Ready Player One quotes and Inception quotes.

1. “That Terminator is out there—it can’t be reasoned with. It doesn’t feel pity, remorse, or fear. And it absolutely will not stop, ever, until you are dead!” – Kyle Reese

3. “The unknown future rolls toward us. I face it, for the first time, with a sense of hope. Because if a machine, a Terminator, can learn the value of human life, maybe we can too.” – Sarah Connor

5. “The future has not been written. There is no fate but what we make for ourselves.” – John Connor

6. “What is it that makes us human? It’s not something you can program. You can’t put it into a chip. It’s the strength of the human heart. The difference between us and machines.” – Marcus Wright

8. “Pain can be controlled, you just disconnect it.” – Kyle Reese

9. “Three billion lives vanished in an instant. And I would lead what was left of the human race to ultimate victory. It hasn’t happened, no bombs fell, computers didn’t take control. We stopped Judgment Day.” – John Connor

10. “Based on your pupil dilation, skin temperature, and motor functions, I calculate an 83% probability that you will not pull the trigger.” – Terminator

11. “When my mission was completed, there were no further orders. So for 20 years, I kept learning how to become a human.” – Terminator

12. “You only postponed it. Judgment Day is inevitable.” – Terminator

14. “I need your clothes, your boots, and your motorcycle.” – Terminator

Meaningful Terminator Quotes That Are Full of Lessons

19. “You point a gun at someone, you’d better be ready to pull the trigger.” – Marcus Wright

21. “Maybe it’ll be enough if you know that, in the few hours we had together, we loved a lifetime’s worth.” – Sarah Connor

22. “Why hold on to someone when you know you must let them go.” – Guardian

23. “Without purpose we have nothing.” – Terminator

24. “You know what I’ve learned, Marcus? Is that you can focus on what is lost, or you can fight for what is left.” – Blair Willimas

25. “All I know is what the Terminator taught me, never stop fighting. And I never will. The battle has just begun.” – John Connor

John Connor: “No, it’s when there’s nothing wrong with you, but you hurt anyway. You get it?”

27. “Thank you, Sarah, for your courage through the dark years. I can’t help you with what you must soon face, except to say that the future is not set. You must be stronger than you imagine you can be. You must survive, or I will never exist.” – Kyle Reese

28. “John Connor gave me a picture of you once. I didn’t know why at the time. It was very old—torn, faded. You were young like you are now. You seemed just a little sad. I used to always wonder what you were thinking at that moment. I memorized every line, every curve—I came across time for you, Sarah. I love you. I always have.” – Kyle Reese

30. “I should feel safe, but I don’t, so I live off the grid—no phone, no address, no one, and nothing can find me. I’ve erased all connections to the past, but as hard as I try, I can’t erase my dreams, my nightmares.” – John Connor

34. “Your foster parents are dead.” – Terminator

36. “Whatever! Either we get her father to shut SkyNet down, stop this shit from ever happening, or so much for the great John Connor. Because your future, my destiny, I don’t want any part of it. I never did.” – John Connor

37. “There is a storm on the horizon. A time of hardship and pain. This battle has been won, but the war against the machines rages on. SkyNet’s global network remains strong, but we will not quit, until all of it is destroyed.” – John Connor

38. Sarah Connor: “I’ve been trying to teach him to blend in. I know it needs work.”

Kyle Reese: “It’s a Terminator! The only reason it blends in is to kill humans.”

39. Marcus Wright: “I know you. I heard your voice on the radio. You’re John Connor.”

John Connor: “Of course, you know me. You were sent here to kill me. Kill the leadership.”

Terminator: “Of course. I’m a Terminator.”

John Connor: “What do you mean, why? Because you can’t.”

John Connor: “Because you just can’t. Trust me on this.”

42. “All my life, my mother told me the storm was coming—Judgment Day, the beginning of a war between man and machines.” – John Connor

43. “Watching John with the machine, it was suddenly so clear. The Terminator would never stop. It would never leave him, and it would never hurt him, never shout at him, or get drunk and hit him, or say it was too busy to spend time with him. It would always be there, and it would die to protect him. Of all the would-be fathers who came and went over the years, this thing, this machine, was the only one who measured up. In an insane world, it was the sanest choice.” – Sarah Connor

More Terminator Quotes for Fans of the Franchise

44. “It’s really fresh and blood, though it seems to heal itself quickly. The heart is human and very powerful. The brain, too, but with a chip interface.” – Kate Connor

45. “The 600 series had rubber skin. We spotted them easily, but these are new. They look human—sweat, bad breath, everything. Very hard to spot. I had to wait till he moved on you before I could zero him.” – Kyle Reese

46. Sarah Connor: “Look—I am not stupid, you know. They cannot make things like that yet.”

Sarah Connor: “Are you saying it’s from the future?”

Sarah Connor: “Then you’re from the future, too. Is that right?”

47. “You want to know the difference between us and the machines? We bury our dead. But no one is coming to bury you.” – Kyle Reese

48. “There was a nuclear war. A few years from now, all this, this whole place, everything, it’s gone. Just gone. There were survivors. Here, there. Nobody even knew who started it. It was the machines, Sarah.” – Kyle Reese

49. “It had no choice. Their defense grid was smashed. We’d won. Taking out Connor then would make no difference. SkyNet had to wipe out his entire existence!” – Kyle Reese

50. “You still don’t get it, do you? He’ll find her! That’s what he does! That’s all he does! You can’t stop him! He’ll wade through you, reach down her throat and pull her fuckin’ heart out!” – Kyle Reese

What Are Your Most Important Takeaways From Terminator?

Terminator is a story about humanity’s battle with its superior artificial creation. Our mind is a powerful thing, and our relationship with technology shouldn’t be taken lightly. After all, if we let ourselves succumb to it, it may lead to our own demise and dehumanization.

In today’s world, the story is still very relevant. We are all reliant on technology and believe that it makes life easier and advances our society. But, we must keep in mind that all technology has adverse side effects that may impact our well-being.

Yes, technology can help us connect with the world and people we won’t usually encounter without it. But, it may also detach us from reality and our emotions. Like everything, we must find a balance between the good and the bad.

Let’s not be like the Terminator who cannot understand and feel emotions. Instead, let’s use technology for good and reach out to those who need our support. We hope you were able to learn a thing or two from this collection of the best Terminator quotes!