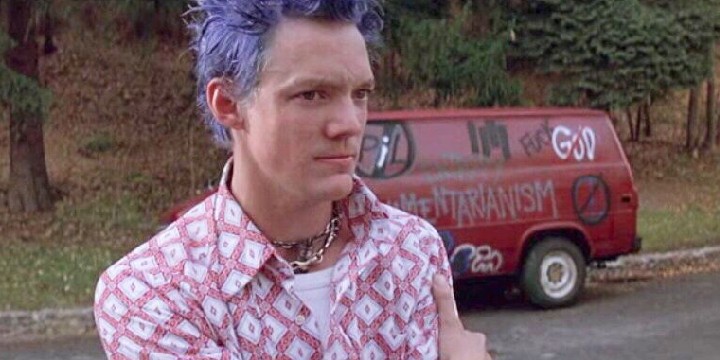 Read this list of SLC Punk! quotes if you want to figure out what to do in your life.

SLC Punk! outlines the life of Steven Levy, a man living in a broken-down apartment with his friend, Bob. They no longer live with their families for different reasons. Steven hates that his hippie dad became a lawyer, and Bob doesn’t want to deal with the problems of having an alcoholic father.

So, to feel happier about life, the duo went to parties, listened to punk rock, and got into fights with people. That’s their way of coping with their messed up families—it was their act of rebellion. They live as total punks while figuring out their purpose in life.

Growing up is difficult. But, it’s even more so if you’re someone who uses rebellion to mask your need to be loved and understood, just like Steven and Bob.

After a series of twists, they realize that being a punk just makes their life extra messy. What’s more, it puts their future at risk. So, if you want to gather some valuable insights to preserve your youth, read on.

And make sure to check out these Dr. Strangelove quotes and Secondhand Lions quotes.

2. “I don’t know who started it and I don’t give a f*ck. The one thing I do know is that we did it harder, we did it faster, and we definitely did it with more love, baby. You can’t take that away from us.” – Steven Levy

3. “The world was just confused—and not the world really, just the people in it.” – Steven Levy

5. “The fight. What does it mean and where does it come from? An essay, H*mo sapien. A man. He is alone in the universe. A Punker. Still a man. He is alone in the universe, but he connects. How? They hit each other. No clearer way to evaluate whether or not you’re alive. Now, complications. A reason to fight somebody different. Difference creates dispute. Dispute is a reason to fight. Now, to fight is a reason to feel pain. Life is pain. So to fight with reason is to be alive with reason. Final analysis, to fight, a reason to live. Problems and contradictions, I am an anarchist. I believe that there should be no rules, only chaos. Fighting appears to be chaos. And when we slam in the pit a show it is. But when we fight for a reason, like rednecks, there’s a system, we fight for what we stand for, chaos. Fighting is a structure, fighting is to establish power, power is government and government is not anarchy. Government is war, and war is fighting. The circle goes like this, our redneck skirmishes are cheap perversions of conventional warfare. War implies extreme government because wars are fought to enforce rules or ideals, even freedom. But other people’s ideals forced on someone else, even if it is something like freedom, is still a rule, not anarchy. This contradiction was becoming clear to me in the fall of ’85. Even as early as my first party, ‘Why did I love to fight?’ I framed it, but still, I don’t understand it. It goes against my beliefs as a true anarchist. But there it was. Competition, fighting, capitalism, government, and the system. That’s what we did. It’s what we always did. Rednecks kicked the sh*t out of punks. Punks kicked the sh*t out of the mods. Mods kicked the sh*t out of skinheads. Skinheads took out the heavy metal guys, and the heavy metal guys beat the living sh*t out of new wavers, and the new wavers did nothing. What was the point? Final summation? None.” – Steven Levy

6. “What do you do when your foundation falls apart? I don’t know. They don’t teach you that in school.” – Steven Levy

7. Steven Levy: “Wait, time out. I just wanted to ask real quick, if I can. You believe in rebellion, freedom, and love, right?”

Steven Levy: “You two are divorced. So love failed. Two, mom, you’re a new ager, clinging to every scrap of Eastern religion that may justify why the above-said love failed. Three, dad, you’re a slick, corporate, preppy-ass lawyer. I don’t really have to say anything else about you do I, dad? Four, you move from New York City, the Mecca and hub of the cultural world to Utah! Nowhere! To change nothing! More to perpetuate this cycle of greed, fascism, and triviality. Your movement of the people, by and for the people got you nothing! You just hide behind some lost sense of drugs, sex, and rock and roll. Ooh, kumbaya! I am the future! I am the future of this great nation that you, father, so arrogantly saved this world for. Look, I have my own agenda. Harvard, out. University of Utah, in. I’m gonna get a 4.0 in damage. I love you guys! Don’t get me wrong, it’s all about this. But for the first time in my life, I’m 18, and I can say f*ck you.”

Steven’s Dad: “Steven, I didn’t sell out son. I bought in. Keep that in mind. That kid’s gonna make a hell of a lawyer, huh?”

Steven’s Mom: “Yeah, he takes after his father. He’s a son of a bitch.”

8. “And so there I was. I was gonna go to Harvard. It was obvious. I was gonna be a lawyer and play in the g*d-d*mn*d system, and that was that. I was my old man. He knew, so what else could I do? I mean, there’s no future in anarchy. I mean let’s face it. But when I was into it, there was never a thought of the future. I mean we were certain the world was gonna end, but when it didn’t, I had to do something, so f*ck it. I could always be a litigator in New York and piss the sh*t out of the judges. I mean that was me—a troublemaker of the future. The guy was one of those guys that my parents so arrogantly saved the world for, so we could f*ck it up. We can do a hell of a lot more damage in the system than outside of it. That was the final irony, I think. That, and well, this. And f*ck you for all of you who were thinking it. I guess, when all was said and done, I was nothing more than a g*d-d*mn*d, trendy-ass poser.” – Steven Levy

10. “Well, it’s a crazy f*cked up world, and we’re all just floating along waiting for someone who can walk on water, man.” – H*roin Bob

Steven Levy: “I don’t have a big heart, Trish. I have a heart the size of a pea. It’s okay, though. You guys are happy. That’s okay. Please, just don’t pity me. I get off in pain. Hey, Bob, tell her I get off on pain, please.”

H*roin Bob: “Yeah, he does, you know. I mellowed out a lot, but Stevo’s f*cking hardcore.”

12. “It’s like f*cking Jesus Christ took a sh*t, and it landed right here, so you can be happy all you f*cking want.” – Steven Levy

13. “I rest my case on this. In a country of lost souls rebellion comes hard. But in a religiously oppressive city, where half its population isn’t even of that religion, it comes like fire.” – Steven Levy

14. Steven Levy: “There were quite a few punks in the SLC back in ’85, but there were equally as many posers. Posers were kids who would dress and act like punks, but they did it for fashion. They were fools! They’d say sh*t like—.”

Poser: “Anarchy in the UK.”

Steven Levy: “See what I mean? Posers. ‘Anarchy in the UK’ What the f*ck’s that? It was a sex pistols thing. That’s where they were from, they were British! They were allowed to go on about anarchy in the UK but what does that mean to us in Utah, America? That’s all you ever hear from these trendy f*cks like—did you hear the new Smiths album? It’s f*cking terrific! Stupid posers walking around Utah saying ‘terriff’ with a stupid English twang. See what I mean? What’s up with the England bullshit. Union Jack is a f*g! I used to know this girl who would only have sex with a guy if he had a stupid f*cking accent. So these *ssholes and there are plenty of *ssholes in this general area would get her drunk and then put on some stupid f*cking accent and go to her and say ‘Ello mistress! You fancy a shag?’ And there she’d be, f*cking knees in the sky. It was sad, it made me sad! The girl had no self-respect.”

15. “There’s nothing going on. That’s what I saw when I looked out over the city—nothing. How the Mormon settlers looked upon this valley and felt that it was the promised land is beyond me. I don’t know, maybe it looked different back then.” – Steven Levy

16. “It wasn’t that I loved Sandy; I knew that we had an understanding. But I discovered then that Chris was right; all things had systems, even me. I was about to beat the living sh*t out of this guy because he had invaded my territory. It was my territory, no question about it, just like in the wild. I was following nature, and nature was order and order is the system.” – Steven Levy

Mark: “Well, stupider than you already are.”

SLC Punk! Quotes That Are Worth Treasuring

18. “See, to me, England was nothing more than a big f*cking American state like North Dakota or Canada.” – Steven Levy

19. “To be an anarchist in Salt Lake City was certainly no easy task, especially in 1985. And having no money, no job, no plans for the future, the true anarchist position was in itself a strenuous job.” – Steven Levy

20. “I like Sandy. Now, Sandy has nothing to do with anarchy in general, she’s just a beautiful, wonderful, funny, witty, loving, sexy, tough-as-nails, little weird girl, and I absolutely adore her. I like Sandy a lot.” – Steven Levy

Did This Collection Inspire You to Spend Your Youth Meaningfully?

Nowadays, the young generation has a unique way of dealing with difficulties. They sometimes let their problems drive them to want to experience everything even if it’s already unhealthy and unsafe.

We witness Steven’s desire to be against everything and everyone just to make others feel he exists. But, in the end, he learns that what he’s doing is an act of rebellion. His actions just made his life spin around in circles without progress and a planned destination.

People might engage in rebellious and dangerous actions because they crave others’ attention. But, remember that acting out is not a solution if you want someone’s love and acknowledgment. Sometimes, you only need to have a heart-to-heart talk with that person so they know how you truly feel.

Yes, everyone wants to live life at its utmost potential. However, our desire to experience all things at once will sometimes lead our life to unpleasant consequences. We must understand that while maximizing our youth, we must protect our future.

That’s the only way we can balance our life and live truly happy in the end. Remember that making yourself useful is much better and more satisfying than doing things that’ll destroy you. Don’t ever sacrifice your future for the temporary pleasure of rebellion.