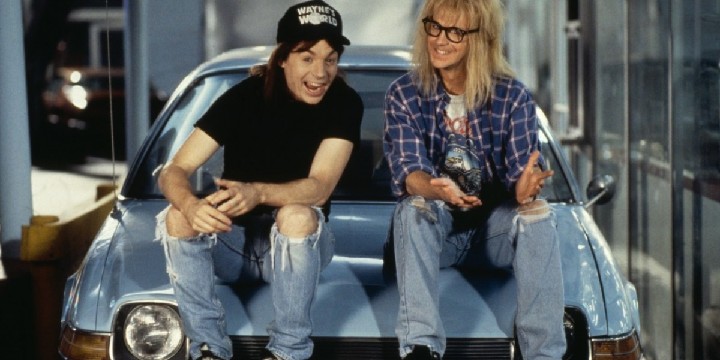 If you’re thinking about using your hobbies and talents for a living, this list of Wayne’s World quotes will surely help!

Wayne’s World is a 1992 movie that tells the story of Wayne and Garth, who host a television show as a hobby. Their show catches the attention of a television producer named Benjamin, who then tries to convince them to sell him the rights to the show. Since they wanted to do what they loved for a living, they grabbed the opportunity.

But, while filming for the show under Benjamin’s direction, Wayne and Garth find adjusting to the new environment challenging. Because of this, they ended up not wanting to do anything with it anymore.

Our passions will lead us to where we want to be. However, remember that it will also depend on our decisions and actions.

So, read through this list of Wayne’s World quotes to guide you!

And don’t forget to check out these White Christmas quotes and This Is Spinal Tap quotes.

1. Garth Algar: “What do you do if every time you see this one incredible woman, you think you’re gonna hurl?”

Wayne Campbell: “I say hurl. If you blow chunks and she comes back, she’s yours. But if you spew and she bolts, it was never meant to be.”

2. “Well, that’s where I see things just a little differently. Contract or no, I will not bow to any sponsor.” – Wayne Campbell

Cassandra Wong: “Is that true?”

Wayne Campbell: “Yes, everything except the reading part.”

4. Wayne Campbell: “All I have to say about that is ‘asphinctersayswhat.’”

5. “What I’d really love is to do Wayne’s World for a living. It might happen. Yeah, and monkeys might fly out of my butt!” – Wayne Campbell

6. Garth Algar: “Did you ever find Bugs Bunny attractive when he put on a dress and played a girl bunny?”

Garth Algar: “Neither did I. I was just asking.”

7. “Benjamin is nobody’s friend. If Benjamin were an ice cream flavor, he’d be pralines and dick.” – Garth Algar

Wayne’s World Quotes That Are Worthy of Your Attention

9. “Garth, marriage is punishment for shoplifting in some countries.” – Wayne Campbell

10. Wayne Campbell: “So, do you come to Milwaukee often?”

Alice Cooper: “Well, I’m a regular visitor here, but Milwaukee has certainly had its share of visitors. The French missionaries and explorers were coming here as early as the late 1600s to trade with the Native Americans.”

Alice Cooper: “Yes, Pete, it is. Actually, it’s pronounced ‘mill-e-wah-que’ which is Algonquin for ‘the good land.’”

Wayne Campbell: “I was not aware of that.”

13. “Hello?! What do you think you’re doing? Only me and Garth get to talk to the camera.” – Wayne Campbell

16. “Let me tell you something about women, Wayne. They want you to come get them. They love it.” – Garth Algar

17. “I don’t even own a gun, let alone many guns that would necessitate an entire rack.” – Wayne Campbell

18. “It’s like a new pair of underwear: At first, it’s constrictive, but after a while, it becomes a part of you.” – Garth Algar

19. “First, he screws me, then he screws you. It’s Dutch door action.” – Wayne Campbell

20. “Well, that’s all the time we had for our movie. We hope you found it entertaining, whimsical and yet relevant, with an underlying revisionist conceit that belied the film’s emotional attachments to the subject matter.” – Wayne Campbell

Do You Think You Can Make a Living Out of Your Passions and Hobbies?

Wayne’s World tells us the story of Wayne and Garth, who used their passions as a stepping stone toward success. However, because they desired to be at the top, they gave up their creative control over their own show. As a result, things didn’t go well for them, and Benjamin eventually betrayed them.

Success doesn’t necessarily mean getting paid for what you do. Instead, what matters is we’re doing things that make us thrive as humans and doing those things with people important to us. Whenever we’re presented with opportunities, don’t jump the gun; think through the pros and cons before deciding.

After all, we’re presented with options and opportunities day in and day out. Sometimes, they come in a disguise, and we need to discern which ones will benefit us in the long run. If we can do this successfully, the material forms of success will eventually follow.

Whenever you feel like you’re far from reaching success, look back on this collection and be reminded that you’re on the right track! Remember, happiness is the ultimate manifestation of being at the top!