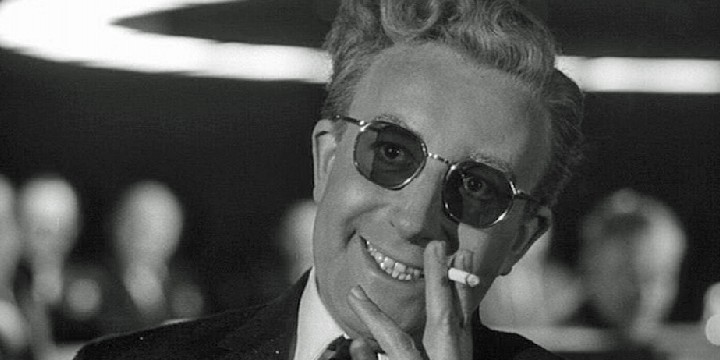 Reading these Dr. Strangelove quotes will make you want to watch the movie over and over again!

Dr. Strangelove is an American movie directed by Stanley Kubrick. Some of you might not know it, but the movie’s complete title is Dr. Strangelove or: How I Learned to Stop Worrying and Love the Bomb.

The story starts when General Jack D. Ripper makes an impulsive decision that threatens all creatures on Earth. He panicked, and it led him to make an irrational move: plotting to start an attack on the Soviet Union.

General Ripper was driven by paranoia; sadly, it could cause massive negative consequences for everyone. He failed to control his anxiety and let fear administer his mind and decisions. The movie might be fictional, but these emotions are certainly something we can all relate to as humans.

Dr. Stangelove is a masterpiece that conveys relevant lessons about life, fear, and decision-making! If you want a better understanding of the movie, check out the complete list below!

And make sure to read these Secondhand Lions quotes and SLC Punk! quotes.

1. Dr. Strangelove: “Of course, the whole point of a doomsday machine is lost if you keep it a secret! Why didn’t you tell the world, eh?”

Alexei de Sadeski: “It was to be announced at the party congress on Monday. As you know, the premier loves surprises.”

Jack D. Ripper: “Nineteen hundred and forty-six. 1946, Mandrake. How does that coincide with your post-war commie conspiracy, huh? It’s incredibly obvious, isn’t it? A foreign substance is introduced into our precious bodily fluids without the knowledge of the individual. Certainly without any choice. That’s the way your hard-core commie works.”

Lionel Mandrake: “Uh, Jack, listen. Tell me, tell me, Jack. When did you first become well and develop this theory?”

Jack D. Ripper: “Well, I, uh I, I first became aware of it, Mandrake, during the physical act of love.”

Jack D. Ripper: “Yes, uh, a profound sense of fatigue, a feeling of emptiness followed. Luckily, I was able to interpret these feelings correctly. Loss of essence.”

Jack D. Ripper: “I can assure you it has not recurred, Mandrake. Women uh, women sense my power, and they seek the life essence. I do not avoid women, Mandrake.”

Jack D. Ripper: “But I do deny them my essence.”

3. “Fluoridation is the most monstrously conceived and dangerous communist plot we have ever had to face.” – Jack D. Ripper

4. “Gentlemen, you can’t fight in here! This is the War Room.” – Merkin Muffley

5. Buck Turgidson: “Mr. President, about, uh, 35 minutes ago, General Jack Ripper, the commanding general of, uh, Burpelson Air Force Base, issued an order to the 34 B-52 of his Wing, which was airborne at the time as part of a special exercise we were holding called Operation Drop-Kick. Now, it appears that the order called for the planes to, uh, attack their targets inside Russia. The, uh, planes are fully armed with nuclear weapons with an average load of, um, 40 megatons each. Now, the central display of Russia will indicate the position of the planes. The triangles are their primary targets. The squares are their secondary targets. The aircraft will begin penetrating Russian radar cover within, uh, 25 minutes.”

Merkin Muffley: “General Turgidson, I find this very difficult to understand. I was under the impression that I was the only one in authority to order the use of nuclear weapons.”

Buck Turgidson: “That’s right, sir, you are the only person authorized to do so. And although I, uh, hate to judge before all the facts are in, it’s beginning to look like, uh, General Ripper exceeded his authority.”

6. Jack D. Ripper: “Mandrake, do you recall what Clemenceau once said about war?”

Jack D. Ripper: “He said war was too important to be left to the generals. When he said that 50 years ago, he might have been right. But today, war is too important to be left to politicians. They have neither the time, the training, nor the inclination for strategic thought. I can no longer sit back and allow Communist infiltration, Communist indoctrination, Communist subversion, and the international Communist conspiracy to sap and impurify all of our precious bodily fluids.”

7. “Based on the findings of the report, my conclusion was that this idea was not a practical deterrent for reasons which at this moment must be all too obvious.” – Dr. Strangelove

8. “If you don’t put that gun away and stop this stupid nonsense, the court of Enquiry on this will give you such a pranging, you’ll be lucky if you end up wearing the uniform of a bloody toilet attendant.” – Lionel Mandrake

9. “Mr. President, I’m not saying we wouldn’t get our hair mussed. But I do say no more than 10 to 20 million were killed, tops. Uh, depending on the breaks.” – Buck Turgidson

10. “If the pilot’s good, see, I mean if he’s really sharp, he can barrel that baby in so low. Oh, you oughta see it sometime. It’s a sight. A big plane like a 52—varrrooom! It’s jet exhaust frying chickens in the barnyard!” – Buck Turgidson

11. “Goldie, how many times have I told you guys that I don’t want no horsing around on the airplane?” – T.J. Kong

Buck Turgidson: “I know how it is, baby. Tell you what you do. You just start your countdown, and old Bucky’ll be back here before you can say ‘blast off!’”

13. Buck Turgidson: “Hmm, Strangelove? What kind of a name is that? That ain’t no Kraut name is it, Stainesey?”

Mr. Staines: “He changed it when he became a citizen. Used to be Merkwürdigliebe.”

Buck Turgidson: “Well, a Kraut by any other name, uh Stainesey?”

14. “Well, I’ve been to one world fair, a picnic, and a rodeo, and that’s the stupidest thing I ever heard come over a set of earphones. You sure you got today’s code?” – T.J. Kong

15. “Deterrence is the art of producing, in the mind of the enemy—the fear to attack!” – Dr. Strangelove

19. Lionel Mandrake: “Colonel! Colonel, I must know what you think has been going on here!”

Bat Guano: “You wanna know what I think?”

Bat Guano: “I think you’re some kind of deviated pervert. I think General Ripper found out about your perversion, and that you were organizing some kind of mutiny of perverts. Now, move!”

20. Jack D. Ripper: “The base is being put on condition red. I want this flashed to all sections immediately.”

Jack D. Ripper: “Group Captain, I’m afraid this is not an exercise.”

Lionel Mandrake: “Not an exercise, sir?”

Jack D. Ripper: “I shouldn’t tell you this, Mandrake, but you’re a good officer, and you have a right to know. It looks like we’re in a shooting war.”

21. “Do I look all rancid and clotted? You look at me, Jack. Eh? Look, eh? And I drink a lot of water, you know. I’m what you might call a water man, Jack that’s what I am. And I can swear to you, my boy, swear to you, that there’s nothing wrong with my bodily fluids. Not a thing, Jackie.” – Lionel Mandrake

22. “Well, boys, I reckon this is it. Nuclear combat toe to toe with the Russkies. Now look, boys, I ain’t much of a hand at making speeches, but I got a pretty fair idea that something doggone important is going on back there. And I got a fair idea of the kinda personal emotions that some of you fellas may be thinking. Heck, I reckon you wouldn’t even be human beings if you didn’t have some pretty strong personal feelings about nuclear combat. I want you to remember one thing, the folks back home are counting on you and by golly, we ain’t about to let them down. I tell you something else, if this thing turns out to be half as important as I figure it just might be, I’d say that you’re all in line for some important promotions and personal citations when this thing’s over with. That goes for every last one of you regardless of your race, color, or your creed. Now let’s get this thing on the hump—we got some flying to do.” – T.J. Kong

23. Lionel Mandrake: “Erm, what about the planes, sir? Surely we must issue the recall code immediately.”

Jack D. Ripper: “Group Captain, the planes are not gonna be recalled. My attack orders have been issued, and the orders stand.”

Lionel Mandrake: “Well, if you’ll excuse me saying so, sir, that would be, to my way of thinking, rather—well, rather an odd way of looking at it. You see, if a Russian attack was in progress, we would certainly not be hearing the civilian broadcasts.”

Jack D. Ripper: “Are you certain of that, Mandrake?”

Lionel Mandrake: “Well, I’m afraid I’m still not with you, sir, because, I mean, if a Russian attack was not in progress, then your use of Plan R—in fact, your order to the entire Wing, oh. I would say, sir, that there was something dreadfully wrong somewhere.”

Jack D. Ripper: “Now, why don’t you just take it easy, Group Captain, and please make me a drink of grain alcohol and rainwater, and help yourself to whatever you’d like?”

Lionel Mandrake: “General Ripper, sir, as an officer in Her Majesty’s Air Force, it is my clear duty, under the present circumstances, to issue the recall code, upon my own authority, and bring back the Wing. If you’ll excuse me, sir. I’m afraid, sir, I must ask you for the key, and the recall code. Have you got them handy, sir?”

24. Merkin Muffley: “I will not go down in history as the greatest mass murderer since Adolf Hitler.”

Buck Turgidson: “Perhaps it might be better, Mr. President, if you were more concerned with the American people than with your image in the history books.”

25. “Well boys, we’ve got three engines out, we’ve got more holes in us than a horse trader’s mule, the radio’s gone, and we’re leaking fuel, and if we were flying any lower, why we’d need sleigh bells on this thing? But we’ve got one thing on those Ruskies. At this height, why they might harpoon us, but they dang sure ain’t gonna spot us on no radar screen!” – T.J. Kong

Did This Collection Help You Understand How Important It Is Not to Make Impulsive Decisions?

In Dr. Strangelove, General Ripper’s paranoia and anxiety would cause severe negative consequences. Worse, this negative outcome would affect not just him but also the rest of the population.

Fortunately, Dr. Strangelove and the other characters were there to prevent our planet from nuclear fallout. They were able to stop it not because they were geniuses but because they carefully planned every step before performing it.

This is a lesson we can all apply in life. No matter what we’re facing, we must not act and decide based on our current emotions. Remember that our feelings are volatile; if we act on impulse, some implications can never be undone.

As humans, we are prone to making mistakes. So, we must carefully consider the possible consequences and outcomes of our actions. It’s normal to feel afraid when facing big decisions in life, but we should never let fear overpower us and dictate what we should and shouldn’t do.

We hope this list of Dr. Strangelove quotes was able to help you understand the importance of planning and reflection. Take the time to think through your actions and decisions, and we guarantee fewer future regrets!