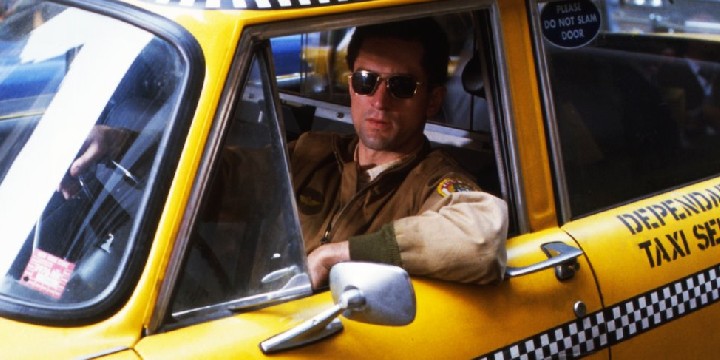 If you’re a sucker for movies that’ll make you reflect on life, these Taxi Driver quotes would fit right up your alley!

Taxi Driver is a 1976 American movie that focuses on the life of a mentally unstable US veteran who works as a nighttime cab driver in New York City. It might seem like a dull and slow-paced movie at first. However, viewers will get a new perspective on life through Travis Bickle’s new day-to-day routine.

Through this movie, we get a glimpse of the destruction that loneliness and isolation bring. And, alongside that, we also learn about how vital will and determination are to survive in this world.

If you’re curious about the movie, read through this list of the best Taxi Driver quotes we’ve compiled. We’re positive you’ll leave with many meaningful insights into life.

And make sure to check out these Scarface quotes and Point Break quotes.

1. “Now, I see it clearly. My whole life is pointed in one direction. I see that now. There never has been any choice for me.” – Travis Bickle

2. “Twelve hours of work and I still can’t sleep. Damn. Days go on and on. They don’t end.” – Travis Bickle

3. “Loneliness has followed me my whole life, everywhere. In bars, in cars, sidewalks, stores, everywhere. There’s no escape. I’m God’s lonely man. June 8th. My life has taken another turn again. The days can go on with regularity over and over, one day indistinguishable from the next. A long continuous chain. Then suddenly, there is a change.” – Travis Bickle

6. “Thank God for the rain, which has helped wash away the garbage and trash off the sidewalks. I’m working long hours now: six in the afternoon to six in the morning. Sometimes, even eight in the morning, six days a week. Sometimes seven days a week. It’s a long hustle, but it keeps me real busy. I can take in 3—350 a week. Sometimes even more when I do it off the meter. All the animals come out at night—whores, skunk pussies, buggers, queens, fairies, dopers, junkies, sick, venal. Someday, a real rain will come and wash all this scum off the streets.” – Travis Bickle

Personnel Officer: “Will you work on Jewish holidays?”

Taxi Driver Quotes to Ponder On

11. “Only a jackass would carry that cannon in the streets like that.” – Easy Andy

12. Travis Bickle: “I should get one of those signs that says, ‘One of these days, I’m gonna get organezized.’”

Betsy: “Oh, you mean ‘organezized.’ Like those little signs they have in offices that say, ‘Thimk.’”

13. “Well, take it or leave it. If you want to save yourself some money, don’t fuck her ‘cause you’ll be back here every night for some more. Man, she’s 12 and a half years old. You never had no pussy like that. You can do anything you want with her.” – Sport Higgins

15. “All right, look. Look at it this way. You know, a man takes a job, you know? And that job—I mean, like that—you know, that becomes what he is. You know, like—you do a thing, and that’s what you are. I mean like I’ve been a cabbie for 17 years. Ten years at night. I still don’t own my own cab. You know why? Because I don’t want to. That must be what I want. You know, to be on the night shift drivin’ somebody else’s cab. You understand? I mean, you become—you get a job, you become the job.” – Wizard

16. “I think you’re a lonely person. I drive by this place a lot, and I see you here. I see a lot of people around you. And I see all these phones and all this stuff on your desk. It means nothing.” – Travis Bickle

17. “When I came inside and I met you, I saw in your eyes, and I saw the way you carried yourself that you’re not a happy person. And I think you need something. And if you want to call it a friend, you can call it a friend.” – Travis Bickle

19. “Let me tell you something. I have learned more about America from riding in taxi cabs than in all the limos in the country.” – Senator Charles Palantine

More Taxi Driver Quotes for Those Curious About This Movie

20. “The idea had been growing in my brain for some time. True force. All the king’s men cannot put it back together again.” – Travis Bickle

23. “This city here is like an open sewer; you know, it’s full of filth and scum. Sometimes I can hardly take it. Whatever ever becomes the President should just really clean it up, know what I mean? Sometimes I go out, and I smell it. I get headaches, it’s so bad, you know. It’s like—they just never go away, you know. It’s like I think that the President should clean up this whole mess here. He should flush it down the fuckin’ toilet.” – Travis Bickle

24. “June 29. I gotta get in shape now. Too much sittin’ is ruinin’ my body. Too much abuse has gone on for too long. From now on, it will be 50 push-ups each morning, 50 pull-ups. There’ll be no more pills, there’ll be no more bad food, no more destroyers of my body. From now on, it will be total organization. Every muscle must be tight.” – Travis Bickle

Travis Bickle: “Hey, I’m not square; you’re the one that’s square. You’re full of shit, man. What are you talking about? You walk out with those fuckin’ creeps and low-lifes and degenerates out on the streets, and you sell your little pussy for peanuts? For some low-life pimp who stands in the hall? And I’m square? You’re the one that’s square, man. I don’t go screwing fuck with a bunch of killers and junkies like you do. You call that bein’ hip? What world are you from?”

Has Sadness Been Eating Away Your Life, Too?

Society has a way of invalidating others’ feelings. Perhaps this fact was the main driving force behind Travis Bickle’s bouts of depression. He was alone in a big city, had a hard time making a living, and no one beside him was willing to listen to what he had to say.

As a taxi driver, Travis had the opportunity to see and observe different people and their many different and unique personalities. However, it pushed him further into the darkness instead of helping him cope with his loneliness. As a result, he seemed to suffer from a schizotypal personality disorder.

Sadly, society isn’t ready to accept people with mental illnesses. Instead of focusing on trying to help them, it casts people out, isolates them, and doesn’t hear them out. So, in the movie, Travis continues to spiral down.

It might not be as apparent, but Taxi Driver is a movie that shows us that people with depression and people who are lonely sometimes only need a little bit of warmth, affection, and an ear to talk to. However, society doesn’t pay attention to them; they only do once irrevocable actions have been done.

So, as we’ve learned from the Taxi Driver quotes above, let’s not wait until it’s too late. If you need help, talk to someone. And, more importantly, if you see or know about someone who’s started to spiral down, reach out, listen, and try to help them be better.