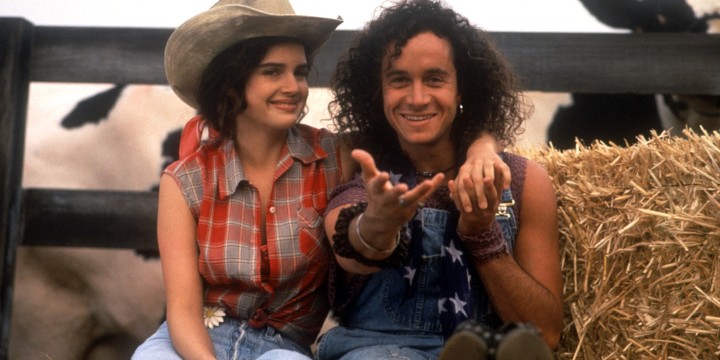 Going through something new in our lives can be tough, so we’ve compiled the best Son in Law quotes to show you it’s not as hard as it seems!

Son in Law is a 1993 comedy movie about a country girl named Rebecca and her party animal of a friend named Crawl. They go to Rebecca’s home in South Dakota, and Crawl finds himself in a situation where he has to pretend to be her fiancé.

Since he had to act as the family’s future son-in-law, he shows interest in farming but bumbles his way through the everyday chores. However, he quickly learns to perform each task over time and eventually becomes close to Rebecca’s family.

Aside from all the comedy, this movie undoubtedly tells us a lot about adapting to any new environment or situation. If this piqued your interest, then the list below is perfect. Read on for the most famous quotes from Son in Law that we’re sure you’ll love!

And don’t forget to check out these What About Bob? quotes and The Pink Panther quotes.

1. Zack Warner: “Maybe now’s a good time to talk about the rules in my room.”

Zack Warner: “There’s only one rule. Don’t touch anything!”

2. Connie Warner: “She’s obviously made up her mind, so let’s just handle this like mature adults.”

Walter Warner: “Right, right—you distract him, and I’m gonna hit him in the head with a shovel.”

4. “Old McWalter had a farm, and on that farm, he had a kid with squishy, puffy cheeks.” – Crawl

Crawl: “Because that’s how I used to get home my freshmen year.”

Crawl: “Fresh off the farm, oh my god, I can’t believe it. Right across the hallway. Hallelujah. So you’re inbred?”

Crawl: “You know, where your mom’s your dad, and your dad’s your brother.”

7. “You guys have chickens? I love chickens! Are they extra crispy or original recipe?” – Crawl

8. Crawl: “Hey, you’ll be happy to know that as soon as you left, I popped your daughter’s trunk.”

9. Crawl: “Have you ever heard of the tooth fairy?”

Crawl: “I wouldn’t fall asleep if I were you.”

10. “Ease up on the steroids. Juice will make your jewels shrivel up like sun-dried tomatoes.” – Crawl

Son in Law Quotes to Lighten Up Your Mood

12. “You’re too late. Yeah, a couple of weeks ago at school I already asked Bec to marry me.” – Crawl

14. “Travis, it really tweaks my melon, to see a buff bro like Crawl here, get wheezed on by a greasy scumbag like you. So you just chill.” – Walter Warner, Sr.

Crawl: “It’s a special quality of leadership that captures the popular imagination and inspires allegiance and devotion.”

17. “Let’s chow down and munch on some grindage.” – Walter Warner

18. “Let’s just get the rules straight here. There’ll be absolutely no partying in this hall between the hours of five and six in the morning, without my express written permission. Okay cool. Carry on.” – Crawl

Crawl: “No, but I can. Majored in karate for two semesters.”

What Is Your Attitude Toward Change?

In the movie, Rebecca felt out of place when she moved to the city to go to college. But, with the help of Crawl, she could adjust to the new environment she was in.

When it was Crawl’s turn to go to experience life in the country, he became a fish out of water. In time, though, he was able to capture the hearts of Rebecca’s family members; he, too, was adored by the family. Slowly but surely, everyone could acclimate themselves to their new setup.

Change is always there. In life, we’ll meet people of different backgrounds and encounter situations we’ve never been in before. These things are unavoidable, and we can either let them overwhelm us or do what it takes to adapt to them.

Though that’s the case, change is not always bad; it just depends on how we react to it. We can use it to grow, improve, and transform ourselves into becoming a better version of ourselves. In the same way, it can be an excuse to stay inside our shells and be locked in a box inside our heads.

That said, remember that the outcome of any change will always depend on you. So, choose wisely!