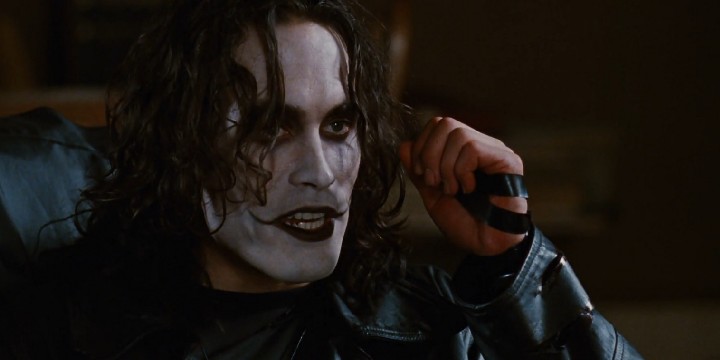 There are a lot of things you will learn about love and life through these 150 The Crow quotes that’ll live in your heart forever.

The Crow is a movie based on the comic book series by James O’Barr, which also has the same title.

It’s a tragic film made all the more thrilling because of the real-life tragedies that surround it.

Are you starting to get curious about how the plot progressed?

Read and analyze the best quotes and lines from the movie!

And don’t forget to check out these Glengarry Glen Ross quotes and Ghostbusters quotes.

Best Quotes From The Crow

1. “If the people we love are stolen from us, the way to have them live on is to never stop loving them. Buildings burn, people die, but real love is forever.” – Sarah

3. “People once believed that when someone dies, a crow carries their soul to the land of the dead. But sometimes, something so bad happens that a terrible sadness is carried with it and the soul can’t rest. Then sometimes, just sometimes, the crow can bring that soul back to put the wrong things right.” – Sarah

4. “Dad gave me this. Fifth birthday. He said, ‘Childhood’s over the moment you know you’re gonna die.’” – Top Dollar

5. “Our friend T-Bird won’t be joining us this evening on account of a slight case of death.” – Top Dollar

6. “He was already dead. He died a year ago the moment he touched her. They’re all dead. They just don’t know it yet.” – Eric Draven

7. “The crow is his link between the land of the living and the realm of the dead.” – Myca

8. “Mother is the name for God, on the lips and hearts of all children. Do you understand? Morphine is bad for you. Your daughter is out there on the streets waiting for you.” – Eric Draven

The Crow Quotes That Talk About Death

17. “I’m not gonna kill you. Your job will be to tell the rest of them that death is coming for them tonight. Tell them Eric Draven sends his regards.” – Eric Draven

19. “Yeah, I shanked her pink *ss and she loved it! Murderer? Murderer?! Let me tell you about murder—it’s fun, it’s easy, and you gonna learn all about it.” – Tin-Tin

The Crow Quotes on God and the Devil

21. “Abashed, the Devil stood and felt how awful goodness is.” – T-Bird

22. “No, I want you to set a fire so g*dd*mn big, the gods will notice us again, that’s what I’m sayin’. I want all of you boys to be able to look me straight in the eye one more time and say, ‘Are we having fun or what?’” – Top Dollar

24. “Jesus Christ? Stop me if you heard this one—‘Jesus Christ walks into a hotel.’” – Eric Draven

25. “A guy shows up looking like a mime from Hell, and you lose him right out in the open. Well, at least he didn’t do that walking against the wind sh*t, I hate that.” – Sergeant Albrecht

Interesting Quotes From The Crow

26. “Little things used to mean so much to Shelly—I used to think they were kind of trivial. Believe me, nothing is trivial.” – Eric Draven

27. “You know, Lake Erie actually caught on fire once from all the crap floating around in it. I wish I could’ve seen that.” – T-Bird

28. “A building gets torched, all that is left is ashes. I used to think that was true about everything, families, friends, feelings. But, now I know that sometimes if love proves real, two people who are meant to be together, nothing can keep them apart.” – Sarah

29. “I got stabbed! I shot the son of a b*tch! I watched the bullet hole close by itself. And then my business gets blown up real good. Other than that, my day sucked.” – Gideon

30. “I have something to give you. I don’t want it anymore. Thirty hours of pain all at once, all for you.” – Eric Draven

31. “Well, gentlemen—by all means—I think we oughta have an introspective moment of silence for poor ol’ Tin-Tin.” – Top Dollar

32. “Do you know someone named T-Bird? He had a friend who shouldn’t have played with knives.” – Eric Draven

33. “I saw him too. He had a guitar. He winked at me before he jumped out a fourth-floor window like he had wings.” – Grange

34. “You are seriously f*ck*d up. Would you look in the mirror? I mean, you need professional help!” – Funboy

37. “It’s more like surfing than skating. I wish the rain would stop just once.” – Sarah

40. “I see you have made your decision, now let’s see you enforce it.” – Eric Draven

Unique The Crow Quotes That Are Full of Quirks

41. “So you’re him, huh? The Avenger. The Killer of Killers. Nice outfit. I’m not sure about the face, though.” – Top Dollar

42. “Are you gonna vanish into thin air again?” – Sergeant Albrecht

45. “You burn yourself playing with matches?” – Grange

47. “Don’t any of your street-demons have real grown-up names?” – Detective Torres

49. “I call it blood, detective. I suppose you’ll write it up as ‘graffiti.’” – Sergeant Albrecht

50. “Oh, sh*t. You’re bleeding all over the place. I thought, you know, you were invincible.” – Sergeant Albrecht

51. “My livelihood got flushed and went swirling.” – Gideon

55. “So many cops, you’d think they givin’ away donuts.” – Sergeant Albrecht

Suspenseful Quotes From The Crow

56. “Suddenly, I heard a tapping, as if someone gently rapping, rapping at my chamber door.” – Eric Draven

68. “She’s not my sister. Shelly just takes care of me. She’s my friend—her and Eric. You lied to her about Eric.” – Sarah

The Crow Quotes to Make You Feel Sentimental

72. “Yeah, eyes see. One of the most important things I learned from my sister.” – Top Dollar

73. “I knew it was you. Even with the makeup. I remembered your song. You said, ‘Can’t rain all the time.’ That is from your song, right? Come on, Eric, I know you’re here. I miss you and Shelly. Get so lonely all by myself. The hell with you. I thought you cared.” – Sarah

75. “All the power in the world resides in the eyes, fella. Sometimes they’re more useful than the people that bear them.” – Top Dollar

Short Quotes From The Crow

93. “Well, I guess you really will need my help, won’t you?” – Sergeant Albrecht

95. “I’m looking for something in an engagement ring. Gold.” – Eric Draven

The Crow Quotes Filled With Sarcasm

102. “Yeah. Good speech though. I didn’t wanna interrupt you. It sounded good. You gotta write that sh*t down!” – Sergeant Albrecht

108. “I remember her. We needed to put some fear into that little lady, she wasn’t going along with our tenant relocation program. Then, her idiot boyfriend shows up and turns a simple, sweeping clear into a total cluster f*ck! Who gives a sh*t? It’s ancient history.” – T-Bird

The Crow Quotes That Will Grab Your Attention

112. “Okay. Gideon blows all to hell and you’re having a chit-chat with some weirdo who winds up in T-Bird’s car when it zigs instead of zags. Then, you steal one of my case files from homicide, and you’re saying this is just a f*ck*ng automobile accident? Come on!” – Detective Torres

114. “Remember? Yeah, I remember everything. But I don’t know what—what? What? What’re you talking about? No, no, no, no. You mean that place downtown?” – T-Bird

115. “There are energies aligning against you.” – Myca

116. “Tin-Tin, somebody stuck his blades in all his major organs in alphabetical order.” – T-Bird

120. “Maybe we oughta just video tape this, play it back in slow motion.” – Top Dollar

121. “I’ve got a g*dd*mn vigilante killer out there knocking off scum bags left and right, and you’re covering up for somebody.” – Detective Torres

122. “That’s what I thought. Are you referring to anyone in particular?” – Sergeant Albrecht

123. “A man has an idea. The idea attracts others, like-minded. The idea expands. The idea becomes the institution. What was the idea?” – Top Dollar

124. “That sounds like a great plan. There’s just one problem.” – Eric Draven

Captivating Quotes From The Crow to Keep You Entertained

128. “I saw somebody. Maybe it was your fairy godfather.” – Sergeant Albrecht

130. “You’re going to say I shouldn’t be in the cemetery in the middle of the night, right?” – Sarah

133. “Who’s the cartoon character in the painted face?” – Detective Torres

139. “How do you steer that thing on a wet street?” – Sergeant Albrecht

More The Crow Quotes From the Comic Book Series

147. “So, the crow spirals down through a collapsed dream and the only sound it makes is like a concave scream.” – James O’Barr, Author

148. “Eric screams and screams, and pounds his head against the wall until phantom fire trucks race across his vision. All he wants is pain—pain and hate—yes, hate. But never fear. Fear is for the enemy. Fear and bullets.” – James O’Barr, Author

149. “Life is lousy with hurt but it also shimmers with beauty.” – James O’Barr, Author

150. “When sorrow comes, they come not single spies, but in battalions. I’ve allies in heaven, Jack, I’ve comrades in hell—say hello for me.” – James O’Barr, Author

What Did The Crow Teach You About Taking Revenge?

People seek vengeance to ease the pain and suffering they are carrying. But, we must remember that it is not a form of justice. Vengeance accomplishes nothing and only worsens the situation.

The Crow told the story of a murdered musician resurrected to avenge his and his fiancee’s deaths. The premise of the plot revolved around the idea that a crow will bring a soul back to life to right wrongs.

The film received positive reviews from critics due to its visuals and character portrayals. It’s no surprise that it became one of the most remembered films of its time.

Which quotes are your favorites? Do you have any additional quotes to share? Please, share them in the comments section below!