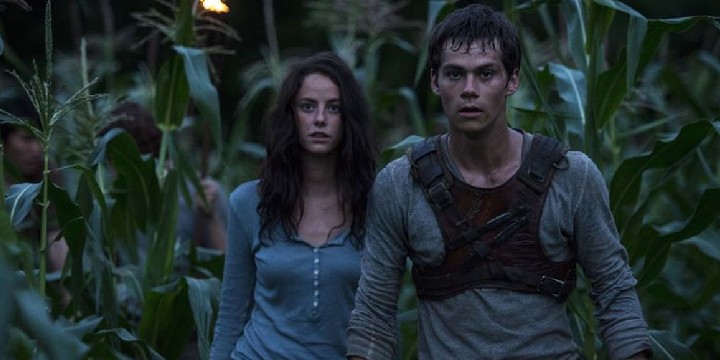 These top 30 The Maze Runner quotes will take you on an unforgettable adventure!

The Maze Runner is a science fiction and action movie released in 2014. It focuses on a teenage boy named Thomas who finds himself in a place called the Glade. The Glade is an open area surrounded by giant walls.

There are other boys in the Glade, but none of them have any memory of how they got there or what happened to them before they were found. Later, they realize they are in a maze, and the main objective is to get out of there alive. So, Thomas teams up with the others to figure out how they can escape.

In their journey, they encountered many challenging obstacles. However, these difficulties did not stop them from finding out what really happened.

Everything in The Maze Runner is intense and full of action! So, you better read the entire collection from beginning to end to revisit your favorite scenes!

And don’t forget to check out these The NeverEnding Story quotes and The Hunger Games quotes.

1. “We don’t belong here. Somebody built the maze. I think it’s time we find out what we’re really up against.” – Thomas

2. Thomas: “We stay close, we stick together, we get through this. We get out now, or we die trying.”

4. “The outside world awaits. Remember, wicked is good.” – Ava Paige

5. Thomas: “Everything started changing the moment you showed up.”

Teresa: “What if we were sent here for a reason?”

6. Thomas: “You don’t have to come with us, but we are leaving. Anyone else who wants to come now is your last chance!”

Gally: “Don’t listen to him. He’s just trying to scare you. All right?”

Thomas: “No, I’m not trying to scare you. You’re already scared. Alright? I’m scared. But I’d rather risk my life out there than spend the rest of it in here. We don’t belong here. This place isn’t our home. We were put here. We were trapped here. At least out there, we have a choice. We can make it out of here. I know that.”

7. “You’re not like the others. You’re curious. But if you want to stay here, I need to know that you’re going to follow the rules.” – Alby

8. “The rules are the only thing that has ever held us together.” – Gally

9. “The most important thing is that we all have each other. Because we’re all in this together.” – Newt

Newt: “That’s the maze. It never takes the same shape twice. Every morning when those doors open, there are runners who look for a way out, and no one has ever survived a night in the maze.”

Thomas: “What happens to them?”

Newt: “We call them Grievers.”

The Maze Runner Quotes That Will Leave You Wanting More

Alby: “Welcome to the Glade.”

14. “They took you because you’re immune to a plague that’s wiping out the human race.” – Vince

Newt: “Have you listened to a word I’ve just said? No one wants to be a runner. And besides, you gotta get chosen.”

Thomas: “Get chosen by who?”

16. “I am sure by now you all must be very confused. Angry, frightened. I can only assure you that everything that’s happened to you, everything we’ve done to you, it was all done for a reason.” – Ava Paige

17. Alby: “My name is Alby. Now, can you tell me anything about yourself, who you are? Thomas: What is this place?”

Alby: “Let me show you. Hope you’re not afraid of heights. Let’s go. Come on. This is all we got.”

Thomas: “What’s out there?”

Alby: “We only have three rules. First, do your part. Second, never harm another Glader. Most importantly, never go beyond those walls.”

Thomas: “I just want to take a look.”

Gally: “We’ve got to stop meeting like this, Greenie.”

Thomas: “Why won’t you tell me what’s out there?”

Alby: “I just want to protect you, man. It’s for your own good.”

Thomas: “All right, you guys can’t just keep me here!”

Chuck: “No. well, I mean, I know I must have them. And wherever they are, I’m sure they miss me. But I can’t miss them back because I don’t remember them. What do you think you’re gonna find out there tomorrow?”

Thomas: “I don’t know. But if there’s a way out, Chuck. Me and Minho are gonna find it.”

Thomas: “Chuck, why would you give this to me?”

Chuck: “Can’t remember them anyway. But maybe if you can find a way out, you can give it to them for me. Well, get yourself some sleep.”

Thomas: “Hey, Chuck? Come here. Hold out your hand. I want you to give that to them yourself. We’re gonna get out of here. All of us. Okay? I promise.”

The Maze Runner Quotes to Stimulate Your Imagination

20. Thomas: “This place, it’s not what we thought it was. It’s not a prison. It’s a test. It all started when we were kids. They’d give us these challenges. They were experimenting on us. And then people started disappearing. Every month, one after the other, like clockwork.”

Newt: “They were sending them up into the maze.”

Thomas: “Guys, I’m one of them. The people who put us here, I worked with them. I—I watched you guys for years. The entire time you’ve been here, I—I was on the other side of it. And so were you.”

Thomas: “Teresa, we did this to them.”

Teresa: “Why would they send us up if we were with them?”

Newt: “He’s right. It doesn’t matter. Any of it. Because the people we were before the maze, they don’t even exist anymore. These creators took care of that. But what does matter is who we are now and what we do right now. You went into the maze, and you found a way out.”

Gally: “Everything started going wrong the minute you showed up. First Ben, then Alby, and now the girl. Everybody saw she recognized you. And I’m betting you know who she is.”

The Maze Runner Quotes for Fans of Action Movies

Gally: “This is all you, Thomas! Huh? Look around!”

Minho: “Back off, Gally! It’s not Thomas’s fault!”

Gally: “You heard what Alby said! He’s one of them!”

26. Newt: “For the moment. But, you see those guys? There, by the fire. Those are the Runners. And that guy in the middle there, that’s Minho, he’s the keeper of the runners. Now every morning, when those doors open, they run the maze, mapping it, memorizing it, trying to find a way out.”

Thomas: “How long have they been looking?”

Newt: “‘She’s the last one—ever.’ What the hell does that mean?”

28. “Well, I think it’s safe to say the maze trials were a complete success. I wasn’t expecting so many survivors, but the more, the merrier. Thomas continues to surprise and impress. And for now, they seem to have taken the bait. It’s too soon to say, but they could be the key to everything. So let’s move forward. It’s time now to begin phase two.” – Ava Paige

Gally: “Good luck against the Grievers.”

30. Gally: “Things are changing. There’s no denying that. First, Ben gets stung in broad daylight. And then Alby. And now our Greenie here has taken it upon himself to go into the maze. Which is a clear violation of our rules here.”

Gally: “Did he? For three years, we have coexisted with these things. And now, you’ve killed one of them. Who knows what that could mean for us?”

Newt: “Well, what do you suggest we do?”

Gally: “He has to be punished.”

Did These The Maze Runner Quotes Inspire You to Keep Finding a Solution to Your Problems?

In life, there are many instances when we choose to give up rather than fight. This is especially true if we deal with too many problems simultaneously. But, The Maze Runner teaches us the importance of constantly moving forward.

We can take this lesson from the characters in the movie who choose to fight and persist. Thomas and his team did everything they could, no matter how complicated their situation was. They encouraged one another to keep going so that no one would lose hope and quit.

It’s easier said than done; after all, they are just fictional characters in the movie. But, if we think about it, we also have many unexpected problems that will come into our lives in the future. So, let’s learn the value of perseverance, just like the characters from The Maze Runner!

With that, we hope these The Maze Runner quotes were able to motivate you to find effective solutions to life’s challenges. Always remember that you can do it!