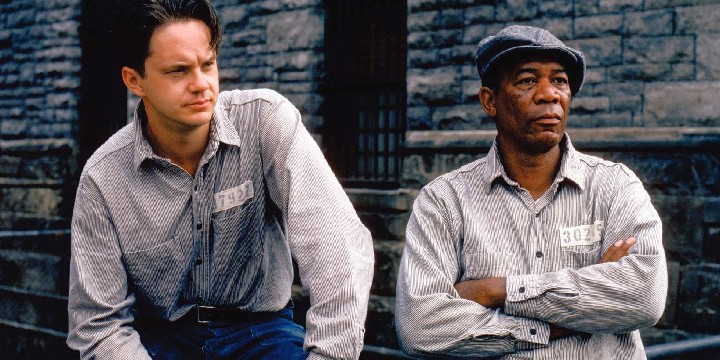 These The Shawshank Redemption quotes are perfect for everyone who wants a better understanding of hope, freedom, and more!

The Shawshank Redemption is a movie that chronicles the life of two prisoners who find solace in each other. Through their tale, we learn many lessons on redemption, morals, and regrets.

It zooms in on the life of Andy Dufresne, who was thrown into Shawshank State Penitentiary for life. What makes his story so heartbreaking, though, is that he was sentenced for a crime he didn’t commit. And, while we hear more about his story, we slowly get a glimpse of the harsh and cold conditions he has to face in prison.

If you’re a fan of The Shawshank Redemption, we’re positive you’ll love this collection of quotes! Reflect on some of the most thrilling and meaningful scenes it offers through the list below.

And make sure to check out these Forrest Gump quotes and The Green Mile quotes.

1. “I guess it comes down to a simple choice: get busy living or get busy dying.” – Andy Dufresne

2. “That’s the beauty of music. They can’t get that from you. Haven’t you ever felt that way about music?” – Andy Dufresne

3. “They send you here for life, and that’s exactly what they take—the part that counts, anyway.” – Ellis Boyd Redding

4. “Every man’s got a breaking point.” – Ellis Boyd Redding

5. “Believe what you want. These walls are funny. First, you hate ‘em, then you get used to ‘em. After long enough, you get so you depend on ‘em. That’s ‘institutionalized.’” – Ellis Boyd Redding

6. “You know what the Mexicans say about the Pacific? They say it has no memory. That’s where I want to live the rest of my life—a warm place with no memory.” – Andy Dufresne

7. “I have no idea to this day what those two Italian ladies were singing about. Truth is, I don’t want to know. Some things are best left unsaid. I’d like to think they were singing about something so beautiful, it can’t be expressed in words, and makes your heart ache because of it. I tell you, those voices soared higher and farther than anybody in a gray place dares to dream. It was like some beautiful bird flapped into our drab little cage and made those walls dissolve away, and for the briefest of moments, every last man in Shawshank felt free.” – Ellis Boyd Redding

8. “I like to think the last thing that went through his head other than that bullet was how the hell that Andy Dufresne got the best of him.” – Andy Dufresne

9. “There’s not a day that goes by that I don’t feel regret. Not because I’m in here, or because you think I should. I look back on the way I was then: a young, stupid kid who committed that terrible crime. I want to talk to him. I want to try and talk some sense to him, tell him the way things are. But I can’t. That kid’s long gone and this old man is all that’s left. I got to live with that. Rehabilitated? It’s just a bullshit word. So you can go and stamp your form, Sonny, and stop wasting my time. Because to tell you the truth, I don’t give a shit.” – Ellis Boyd Redding

10. “Sometimes it makes me sad, though—Andy being gone. I have to remind myself that some birds aren’t meant to be caged. Their feathers are just too bright. And when they fly away, the part of you that knows it was a sin to lock them up does rejoice. But still, the place you live in is that much more drab and empty that they’re gone. I guess I just miss my friend.” – Ellis Boyd Redding

11. “Andy Dufresne—who crawled through a river of shit and came out clean on the other side.” – Ellis Boyd Redding

12. “I could see why some of the boys took him for snobby. He had a quiet way about him, a walk and a talk that just wasn’t normal around here. He strolled, like a man in a park without a care or a worry in the world, like he had on an invisible coat that would shield him from this place.” – Ellis Boyd Redding

13. “Bad luck, I guess. It floats around. It’s got to land on somebody. It was my turn, that’s all. I was in the path of the tornado. I just didn’t expect the storm would last as long as it has.” – Ellis Boyd Redding

14. “I believe in two things: discipline and the Bible. Here, you’ll receive both. Put your trust in the lord. Your ass belongs to me. Welcome to Shawshank.” – Samuel Norton

15. “The funny thing is, on the outside, I was an honest man. Straight as an arrow. I had to come to prison to be a crook.” – Andy Dufresne

16. “I hope I can make it across the border. I hope to see my friend and shake his hand. I hope the Pacific is as blue as it has been in my dreams. I hope.” – Ellis Boyd Redding

17. “The world went and got itself in a big damn hurry.” – Brooks Hatlen

18. “I’d hate to deprive you of this. Salvation lies within.” – Samuel Norton

21. “Remember, Red, hope is a good thing, maybe the best of things, and no good thing ever dies.” – Andy Dufresne

22. “Let me tell you something, my friend. Hope is a dangerous thing. Hope can drive a man insane.” – Andy Dufresne

23. Andy Dufresne: “There are places in the world that aren’t made out of stone. There’s something inside they can’t touch.”

Ellis Boyd Redding: “What are you talking about?”

24. “I find I’m so excited; I can barely sit still or hold a thought in my head. I think it’s the excitement only a free man can feel, a free man at the start of a long journey whose conclusion is uncertain.” – Ellis Boyd Redding

25. “In prison, a man will do most anything to keep his mind occupied.” – Andy Dufresne

26. “The first night’s the toughest, no doubt about it. They march you in naked as the day you were born, skin burning and half blind from that delousing shit they throw on you, and when they put you in that cell, and those bars slam home—that’s when you know it’s for real. A whole life blown away in the blink of an eye. Nothing left but all the time in the world to think about it.” – Ellis Boyd Redding

27. “We sat and drank with the sun on our shoulders and felt like free men. Hell, we could have been tarring the roof of one of our own houses. We were the lords of all creation. As for Andy, he spent that break hunkered in the shade—a strange little smile on his face, watching us drink beer.” – Ellis Boyd Redding

28. “I wish I could tell you that Andy fought the good fight, and the Sisters let him be. I wish I could tell you that. But prison is no fairytale world. He never said who did it, but we all knew. Things went on like that for a while—prison life consists of routine, and then more routine. Every so often, Andy would show up with fresh bruises. The Sisters kept at him—sometimes he was able to fight ’em off, sometimes not. And that’s how it went for Andy—that was his routine. I do believe those first two years were the worst for him, and I also believe that if things had gone on that way, this place would have gotten the best of him.” – Ellis Boyd Redding

29. “Yes, sir. Absolutely. I’ve learned my lesson. I can honestly say I’m a changed man. I’m no longer a danger to society. That’s the God-honest truth. No doubt about it.” – Ellis Boyd Redding

30. Andy Dufresne: “My wife used to say I’m a hard man to know. Like a closed book. Complained about it all the time. She was beautiful. God, I loved her. I just didn’t know how to show it, that’s all. I killed her, Red. I didn’t pull the trigger, but I drove her away. And that’s why she died, because of me—the way I am.”

Ellis Boyd Redding: “That don’t make you a murderer. Bad husband, maybe. Feel bad about it if you want to, but you didn’t pull the trigger.”

Andy Dufresne: “No, I didn’t. Somebody else did. And I wound up in here.”

Would You Agree That The Shawshank Redemption Is One of the Most Powerful Movies Ever Released?

Few movies can turn your life around; The Shawshank Redemption is one of the few exceptions to this. It’s a full-spectrum movie that discusses everything from Andy’s sentence, his escape, and the lessons he’s learned on the way to freedom.

Andy didn’t try to find his way out of Shawshank immediately. But, in his conversations with Red, the warden, and others, he slowly became aware that his innocence didn’t matter to anyone else. Because of this, he found his own source of hope and slowly started digging out a tunnel that would lead to his liberty.

Hope—one of the movie’s most powerful and vital themes—is expounded on through Red and Andy’s conversations. For Andy, hope is what will lead to one’s freedom and salvation. But, for Red, it’s dangerous and futile to have hope in a place like Shawshank.

Even so, Andy held on to hope—no matter how small—and eventually broke free from his sentence. Just imagine how you would feel should you be in the same situation as Andy. Living life in Shawshank—with no hope of freedom—would break you and crumble your resolve.

So, in any circumstance, remember what you’ve learned from the movie: believe in hope and know that you’ll always have a way out. Persistence and determination are keys to happiness, success, and freedom!