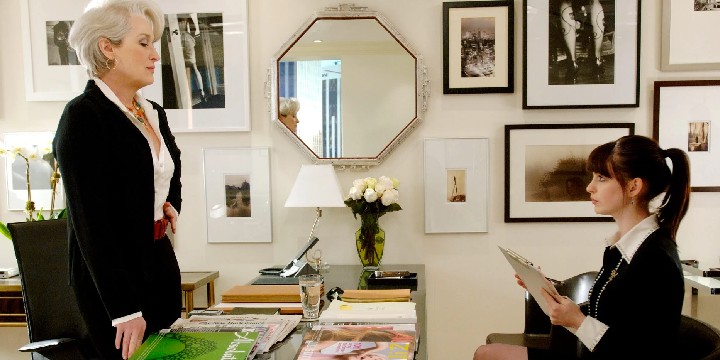 Get a glimpse of the world of glitz and glamour through this list of the best The Devil Wears Prada quotes!

The Devil Wears Prada is one of the most iconic movies of all time.

From the red heel poster, the cast, the lines, and of course, the wardrobe, everything just screams high fashion!

But, looking beyond the surface, the movie teaches us to be daring and uncompromising when it comes to our true selves.

Yes, fashion is an art, and it’s something we can relate to life itself.

However, genuinely understanding what they entail doesn’t come easy.

Our main protagonist, Andy, learns this and more from the iconic Miranda Priestly and her other colleagues in Runway.

If you’re curious about the movie, or just a fan like us, then you’ll love this collection we’ve created for you.

Scroll through to the end to learn some life-changing lessons you can live by.

And don’t forget to check out these Mean Girls quotes and Superbad quotes.

1. “You sold your soul to the devil when you put on your first pair of Jimmy Choos. I saw it.” – Emily Charlton

Miranda Priestly: “You already did. To Emily.”

Andy Sachs: “That’s not what I—no, that was different. I didn’t have a choice.”

Miranda Priestly: “No, no, you chose. You chose to get ahead. You want this life. Those choices are necessary.”

Andy Sachs: “But what if this isn’t what I want? I mean, what if I don’t wanna live the way you live?”

3. “Is there some reason that my coffee isn’t here? Has she died or something?” – Miranda Priestly

4. Andy Sachs: “I thought only the first assistant went to the benefit.”

Miranda Priestly: “Only when the first assistant hasn’t decided to become an incubus of viral plague.”

5. “That’s what this multi-billion dollar industry is all about anyway, isn’t it? Inner beauty.” – Nigel Kipling

Andy Sachs: “No. No, no. Nothing’s—you know, it’s just that both those belts look exactly the same to me. You know, I’m still learning about all this stuff and, uh—.”

8. Miranda Priestly: “You have no sense of fashion.”

Andy Sachs: “I think that depends on—.”

Miranda Priestly: “No, no, that wasn’t a question.”

Andy Sachs: “What kind of skirts?”

Miranda Priestly: “Please bore someone else with your—questions.”

10. “Who is that sad little person? Are we doing a before-and-after piece I don’t know about?” – Nigel Kipling

11. “She’s not happy unless everyone around her is panicked, nauseous, or suicidal.” – Andy Sachs

13. “Okay. I have four hours to get the impossible manuscript. Spitemmoskis doesn’t open until 11:30. How am I going to get the steak?” – Andy Sachs

15. “Details of your incompetence do not interest me.” – Miranda Priestly

17. “And this layout for the Winter Wonderland spread—not wonderful yet.” – Miranda Priestly

18. “By all means, move at a glacial pace. You know how that thrills me.” – Miranda Priestly

19. “Find me that piece of paper I had in my hand yesterday morning.” – Miranda Priestly

20. “I said to myself, ‘Go ahead. Take a chance. Hire the smart, fat girl.’ I had hope. My God, I live on it. Anyway, you ended up disappointing me more than any of the other silly girls.” – Miranda Priestly

21. “‘This stuff?’ Oh. Okay. I see. You think this has nothing to do with you. You go to your closet and you select—I don’t know—that lumpy blue sweater, for instance, because you’re trying to tell the world that you take yourself too seriously to care about what you put on your back. But what you don’t know is that that sweater is not just blue, it’s not turquoise. It’s not lapis. It’s actually cerulean. And you’re also blithely unaware of the fact that in 2002, Oscar de la Renta did a collection of cerulean gowns. And then I think it was Yves Saint Laurent—wasn’t it—who showed cerulean military jackets? I think we need a jacket here. And then cerulean quickly showed up in the collections of eight different designers. And then it, uh, filtered down through the department stores and then trickled on down into some tragic casual corner where you, no doubt, fished it out of some clearance bin. However, that blue represents millions of dollars and countless jobs and it’s sort of comical how you think that you’ve made a choice that exempts you from the fashion industry when, in fact, you’re wearing the sweater that was selected for you by the people in this room from a pile of stuff.” – Miranda Priestly

22. “I’m sorry, do you have some prior commitment? Some hideous skirt convention you have to go to?” – Emily Charlton

24. “A million girls would kill for this job.” – Emily Charlton

25. “You have some very large shoes to fill. I hope you know that.” – Emily Charlton

28. “I don’t care if she was going to fire you or beat you with a red hot poker, you should’ve said no.” – Emily Charlton

29. “I refuse to be sick—I’m wearing Valentino for crying out loud.” – Emily Charlton

31. “Right, remember, you and I have totally different jobs. I mean you get coffee. And you run errands. Yet I’m in charge of her schedule, her appointments, and her expenses, and most importantly, um, I get to go with her to Paris for fashion week in the fall. I get to wear couture and go to all the shows and all the parties and meet all of the designers. It’s divine!” – Emily Charlton

32. “I’m just one stomach flu away from my goal weight.” – Emily Charlton

33. “Let me know when your whole life goes up in smoke. Means it’s time for a promotion.” – Nigel Kipling

35. “Oh, never mind. I’m sure you have plenty more poly-blend where that came from.” – Nigel Kipling

36. “Excuse me, can we adjust the attitude? Don’t make me feed you to one of the models.” – Nigel Kipling

37. “A little Crisco, some fishing wire, and we’re in business.” – Nigel Kipling

39. “Well, you know me. Give me a full ballerina skirt and a hint of a saloon and I’m on board.” – Nigel Kipling

Iconic The Devil Wears Prada Quotes That You Will Never Forget

40. Jocelyn: “Well, they’re showing a lot of florals right now, so I was thinking—.”

41. Nigel Kipling: “There’s a scale. One nod is good, two nods is very good. There’s only one actual smile on record and that was Tom Ford in 2001. If she doesn’t like it, she shakes her head. Then of course there’s the pursing of the lips.”

43. Nigel Kipling: “Come on. Miranda pushed the run-through up a half hour. And she’s always 15 minutes early.”

44. “Rupert Murdoch should cut me a check for all the paper I sell for him.” – Miranda Priestly

45. Miranda Priestly: “There you are Emily. How many times do I have to scream your name—.”

Andy Sachs: “A—a—actually it’s Andy. My name is Andy. Andrea, but everyone calls me Andy.”

46. Miranda Priestly: “Make sure we have Pier 59 at 8 a.m. tomorrow. And remind Jocelyn I need to see a few of those satchels that Mark is doing in the pony. And then tell Simone I’ll take Jackie if Maggie isn’t available. Did Demarchelier confirm?”

Miranda Priestly: “Demarchelier. Did he—get him on the phone.”

Nigel Kipling: “And that’s my problem because—oh, wait. No, it’s not my problem.”

The Devil Wears Prada Quotes for All the Fans Worldwide

48. “You know, in case you were wondering—the person whose calls you always take? That’s the relationship you’re in. I hope you two are very happy together.” – Nate Cooper

50. Miranda Priestly: “Did you fall down and smack your little head on the pavement?”

Andy Sachs: “Not that I can recall.”

51. Emily Charlton: “When I am not here, Andrea, you are chained to that desk!”

Emily Charlton: “What? No! Nothing! One time an assistant left the desk. Oh, because she sliced her hand open with a letter opener, and Miranda missed Lagerfeld just before he was about to board a 17-hour flight to Australia. She now works at TV Guide.”

Emily Charlton: “That, I can’t even talk about.”

53. “Oh, God. Get away from her, she’s useless. And unattractive. Ask for Ivan. Tell him we need 20 skirts for a reshoot.” – Miranda Priestly

Nigel Kipling: “She means you.”

Emily Charlton: “You know, I rarely say this to people who aren’t me, but you have got to calm down! Bloody hell.”

Andy Sachs: “You’re not that désolé at all.”

60. “Why didn’t you just climb into bed with her and ask for a bedtime story?” – Emily Charlton

Did The Devil Wears Prada Open Your Eyes to the Nitty-Gritty of Fashion and Life?

Often, we get so caught up in the hustle and bustle of our careers. We grind, strive, and do whatever it takes to reach the top. But, once there, you’ll realize that being at the top isn’t all that it’s made up to be.

The Devil Wears Prada touches on this lesson and relates it to many other pearls of wisdom we can all learn from. Being the best isn’t easy, and there will be times when you have to make decisions—and sacrifices—that you may regret later on.

It’s essential for us to have courage and dare act upon our dreams. However, we must always keep in mind that success wouldn’t be genuine if we had to change who we are to achieve it. Also, our relationships with our loved ones shouldn’t be put on the back burner to achieve momentary recognition.

Though The Devil Wears Prada zooms in on the fashion industry, it’s clear that its lessons extend way beyond it. With that, we hope the quotes above were able to give you some insights into life and success and how you should go about them. Strive for your dreams, but don’t stray away from who you truly are.

Have you watched The Devil Wears Prada before? Are there other lessons you’ve learned from the movie? Comment below!