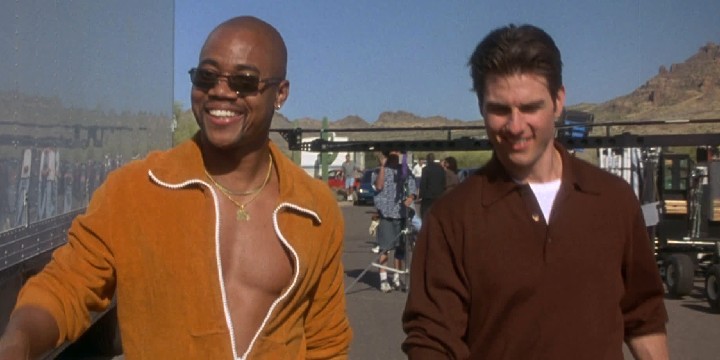 These Jerry Maguire quotes are exactly what you need if you feel lost in life or need some motivation to get through the day.

Jerry Maguire is one of Tom Cruise’s movies that will make you appreciate him even more.

More than being a classic, his portrayal of a sports agent who loses his job but never gives up despite his failures will help you see life in a new light.

Each of us had our fair share of failures in life that made us hesitant to try again.

But how will you know if you’re capable of something if you don’t try it and let your fears get in the way of your dreams?

Life will never run out of challenges to throw at you. That’s why we’ve gathered these Jerry Maguire quotes to inspire you to persevere and try again, no matter what curveball you face.

And make sure to check out these Pretty Woman quotes and Casablanca quotes.

1. “There is such a thing as manners, a way of treating people.” – Jerry Maguire

4. “There is no real loyalty, and the first person who taught me that was you.” – Avery Bishop

8. “The key to this business is personal relationships.” – Dicky Fox

9. “Anyone else would have left you by now, but I’m sticking with you.” – Rod Tidwell

10. “That’s the truth. Can you handle it? It’s just a question between friends, you know. Oh, and when they call you ‘shrimp,’ I’m the one who defends you!” – Jerry Maguire

11. “Hey, I don’t have all the answers. In life, to be honest, I failed as much as I have succeeded. But I love my wife. I love my life. And I wish you my kind of success.” – Dicky Fox

12. “I am out here for you. You don’t know what it’s like to be me out here for you. It is an up-at-dawn, pride-swallowing siege that I will never fully tell you about, okay? Help me—help you. Help me, help you.” – Jerry Maguire

13. “I’m telling you to be the best version of you, to get back to the guy who first started playing this game.” – Jerry Maguire

16. “Everybody loves you. Pisses me off.” – Ethan Valhere

23. “There is a sensitivity thing that some people have. I don’t have it.” – Avery Bishop

24. “What you do have is my whole world, and it’s stronger than oak.” – Matt Cushman

26. “That’s how you become great, man. Hang your balls out there!” – Jesus of CopyMat

27. “So this is the world, and there are almost six billion people on it. When I was a kid, there were three. It’s hard to keep up.” – Jerry Maguire

28. “No, no. You can do better than that! I want you to say it brother with meaning! Hey, I got Bob Sugar on the other line. I bet you he can say it!” – Rod Tidwell

29. “On the surface, everything seems fine. I’ve got this great guy. And he loves my kid. And he sure does like me a lot. And I can’t live like that. It’s not the way I’m built.” – Dorothy Boyd

30. “Think about back when you were a little kid. It wasn’t about the money, was it? Was it?” – Jerry Maguire

32. “I had a breakdown. Breakdown? No, breakthrough.” – Jerry Maguire

34. “We live in a cynical world, and we work in a business of tough competitors.” – Jerry Maguire

35. “Friends can tell each other anything if we have our ‘friends’ hats on, right?” – Jerry Maguire

36. “What started out as one page became 25. Suddenly, I was my father’s son again.” – Jerry Maguire

37. “Have you ever gotten the feeling that you aren’t completely embarrassed yet, but you glimpse tomorrow’s embarrassment?” – Jerry Maguire

38. “I couldn’t escape the simple thought that I hated myself—no, I hated my place in the world.” – Jerry Maguire

39. “Right now, you are a paycheck player. You play with your head, not your heart. In your personal life, heart. But when you get on the field it’s all about what you didn’t get.” – Jerry Maguire

40. “But tonight, our little project, our company, had a very big night. A very, very big night. But it wasn’t complete, wasn’t nearly close to being in the same vicinity as complete, because I couldn’t share it with you.” – Jerry Maguire

41. “But if anybody else wants to come with me, this moment will be the ground floor of something real and fun and inspiring and true in this Godforsaken business and we will do it together!” – Jerry Maguire

42. “I will not rest until I have you holding a Coke, wearing your own shoe, playing a Sega game featuring you, while singing your own song in a new commercial, starring you, broadcast during the Superbowl, in a game that you are winning, and I will not sleep until that happens. I’ll give you 15 minutes to call me back.” – Jerry Maguire

45. “You are hanging on by a very thin thread and I dig that about you!” – Rod Tidwell

46. “I am a valuable commodity! I go across the middle! I see a dude coming at me, trying to kill me, I tell myself ‘Get killed. Catch the ball!’ Boo-ya! Touchdown!” – Rod Tidwell

47. “I got a shelf life of 10 years, tops. My next contract’s gotta bring me the dollars that’ll last me and mine a long time. Shit, I’m out of this sport in five years. What’s my family gonna live on?” – Rod Tidwell

49. “It’s something very personal, a very important thing. Hell! It’s a family motto. Are you ready Jerry? I wanna make sure you’re ready, brother. Here it is: show me the money. Show! Me! The! Money! Jerry, it is such a pleasure to say that! Say it with me one time, Jerry.” – Rod Tidwell

51. “In this age, optimism like that is a revolutionary act.” – Dorothy Boyd

54. “How about a little piece of integrity in this world that is so full of greed and a lack of honorability that I don’t know what to tell my son!” – Dorothy Boyd

55. “Oh please. My need to make the best of things, and your need to be what, ‘responsible.’ If one of us doesn’t say something now we might lose 10 years being polite about it. Why don’t we call this next road trip what it is? A nice long break.” – Dorothy Boyd

Jerry Maguire Quotes That Will Teach You About Love and Relationships

57. “I’ve had three lovers in the past four years, and they all ran a distant second to a good book and a warm bath.” – Dorothy Boyd

62. “I took advantage of you and worst of all, I’m not alone. I did this with a kid. I was just on some ride where I thought I was in love enough for both of us. I did this. And at least I can do something about it now.” – Dorothy Boyd

Dorothy Boyd: “Why not? I deserve that much.”

65. Jerry Maguire: “This is going to change everything.”

Rod Tidwell: “Wait a minute, that’s bullshit. You have to be fair to her. A single mother is a scared thing. You’ve got to have the talk. She loves you. If you don’t love her, you’ve got to tell her.”

Rod Tidwell: “No! Not show you! Show me the money!”

Jerry Maguire: “I’m glad we had this talk.”

69. Rod Tidwell: “I feel for you, man. But a real man wouldn’t shoplift from a single mom.”

Jerry Maguire: “I didn’t shoplift. All right. I shoplifted.”

70. Rod Tidwell: “Yeah, man, it means love, respect, community—and the dollars too. The package. The kwan.”

Jerry Maguire: “But how did you get ‘kwan?’”

Rod Tidwell: “I got there from ‘coin,’ dude. Coin, coin—kwaaaan.”

Did These Jerry Maguire Quotes Motivate You to Persevere in the Face of Adversity?

Jerry Maguire is a 1996 romantic comedy-drama movie filled with inspirational quotes about life, family, and love. Here, he faces several difficulties that challenge him to step up and do his best to overcome them.

Life isn’t always fair; you can be at the pinnacle of your success one minute and then at the bottom the next. Jerry went through this when he lost his job and even his fiancée. Fortunately, he had Dorothy, a single mother who encouraged him to believe in his abilities and rebuild his career.

Through getting back up from his failures, Jerry was able to bring out the best in himself and those around him. He spoke from experience and encouraged his clients to never give up on their dreams and work hard to advance in their careers.

Keep in mind that some people appear to be strong and powerful, but they’ve encountered a low point in their lives as well. Share these quotes with others because you never know when they’ll need the motivation to move forward too. With that, we hope these Jerry Maguire quotes were able to inspire you to persevere and never give up on your dreams in life.

Which of these Jerry Maguire quotes inspired you the most? Did we miss any of your favorite quotes? Please, let us know in the comments section.