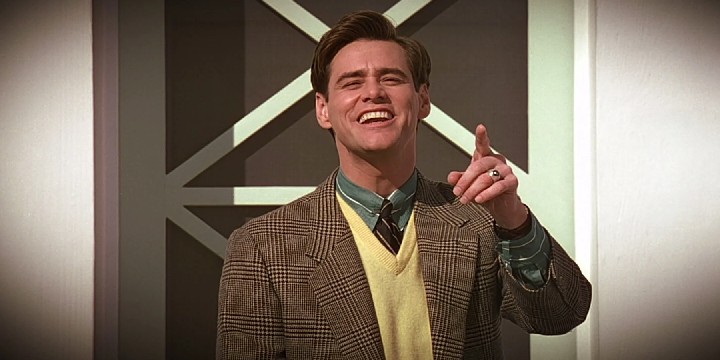 Experience an extraordinary life in an artificially created world through this collection of The Truman Show quotes.

The Truman Show is a psychological comedy-drama movie that earned many awards and nominations.

It follows the life of Truman Burbank, a star of a reality TV show whose whole life is filmed without his knowledge.

He was adopted from birth and was put on an island built within a gigantic dome inhabited by actors that act as his family and friends.

As he began to uncover that everything around him was made up, his world began to crumble.

But, despite all his fears and uncertainties, he set out on an adventure to seek the truth and regain his freedom.

So, if you’re interested in Truman’s journey toward self-discovery, this collection of quotes is for you.

And make sure to check out these Eternal Sunshine of the Spotless Mind quotes and Dead Poets Society quotes.

1. “We accept the reality of the world with which we’re presented. It’s as simple as that.” – Christof

3. “You can’t get any further away before you start coming back.” – Truman

6. “People forget it takes the population of an entire country to keep the show running.” – Christof

7. “I knew this show was fake from the start, it was my incredible acting that fooled everyone.” – Truman

8. “Good morning, and in case I don’t see ya: good afternoon, good evening, and goodnight.” – Truman

Christof: “You were real—that’s what made you so good to watch.”

10. “I have given Truman the chance to lead a normal life. The world, the place you live in, is the heart-to-heart disease sick place. Seahaven is the way the world should be.” – Christof

12. “We’ve become bored with watching actors give us phony emotions. We are tired of pyrotechnics and special effects. While the world he inhabits is, in some respects, counterfeit, there’s nothing fake about Truman himself. No scripts, no cue cards. It isn’t always Shakespeare, but it’s genuine. It’s life.” – Christof

14. “Say something, Goddammit! You are on television! You’re live to the whole world!” – Christof

15. “We can’t let him die in front of a live audience!” – Network Executive

16. “Well! It’s about time they cleaned up the trash downtown before we become just like the rest of the country.” – Angela

18. “I am the creator of a television show that gives hope and joy and inspiration to millions.” – Christof

19. “You never see anything anyway. They always turn the camera and play music and you know, the wind blows in and the curtain moves and you don’t see anything.” – Security Guard

20. “It’s all true. It’s all real. Nothing here is fake. Nothing you see on this show is fake. It’s merely controlled.” – Marlon

21. “The point is, I would gladly step in front of traffic for you, Truman. And the last thing I would ever do to you—is lie to you.” – Marlon

22. Christof: “I know you better than you know yourself.”

Truman: “You never had a camera in my head.”

23. “How can anyone expect me to carry on under these conditions?” – Meryl

24. “Is that the best you can do? You’re gonna have to kill me! What do ya do with a drunken sailor?” – Truman

25. “It feels like the whole world revolves around me somehow.” – Truman

26. “For me there is no difference between private life and public life. My life is ‘The Truman Show.’ The Truman Show is a lifestyle, a noble lifestyle. It is a truly blessed life.” – Meryl

27. “It’s a lot of world for one man, Truman. Are you sure that’s not wishful thinking? You wishing you’d made something more of yourself.” – Marlon

28. “What right do you have to take a baby and turn his life into some kind of mockery? Don’t you ever feel guilty?” – Sylvia

30. “I hereby proclaim this planet Trumania of the Burbank Galaxy.” – Truman

31. “The early bird gathers no moss! The rolling stone catches the worm!” – Truman

32. Meryl: “Why don’t you let me fix you some of this Mococoa drink? All-natural cocoa beans from the upper slopes of Mount Nicaragua. No artificial sweeteners.”

34. “It was Dad. I swear! Dressed like a homeless man. And you know what else was strange? A businessman and a woman with a little dog came out of nowhere and forced him onto a bus.” – Truman

35. “It’s no accident that I wear this goofy little beanie.” – Christof

37. “Incidentally, I believe Truman is the first child to have been legally adopted by a corporation?” – Mike

38. “Do you know that there’s a rumor circulating that he’s dead? Do you hear me? The media is having a feeding frenzy with this, all the phone lines are jammed, and every network has a pirated shot of Marlon making an ass of himself in front of the cameras!” – Network Executive

40. “As Truman grew up, we were forced to manufacture ways to keep him on the island.” – Christof

41. “Everything on the show is for sale. The actor’s wardrobe, food products, to the very homes they live in.” – Christof

42. “Look at that sunset, Truman. It’s perfect—that’s the Big Guy. Quite a paintbrush he’s got.” – Marlon

43. “Hi Christof, I’d just like to say one thing. You’re a liar and a manipulator and what you’ve done to Truman is sick!” – Sylvia

44. Meryl: “We have mortgage payments, Truman. We have car payments. What, we’re going to just walk away from our financial obligations?”

Truman: “It would be an adventure!”

Meryl: “I thought we were gonna try for a baby. Isn’t that enough of an adventure?”

Did These Quotes Give You the Courage to Search for the Truth?

Many times in our lives, we are faced with doubts and uncertainties. Since we don’t dare to face them and are afraid of getting hurt, we sometimes ignore the truth. After all, searching for the unknown is indeed like opening Pandora’s box.

In this way, Truman is a man with remarkable courage. It is not easy to leave a comfortable and safe life in exchange for a world that’s unfamiliar to him. But, he knew that it was the only way for him to be free and live a life he could finally call his own.

Living a life full of lies and deceit is like living a chained life. So, be brave and escape from these chains that hold you back from achieving real happiness. Like Truman, be true to yourself and be free.

Did these quotes manage to entertain you? Which of these quotes were most relevant to you? Share your thoughts and leave a comment below.