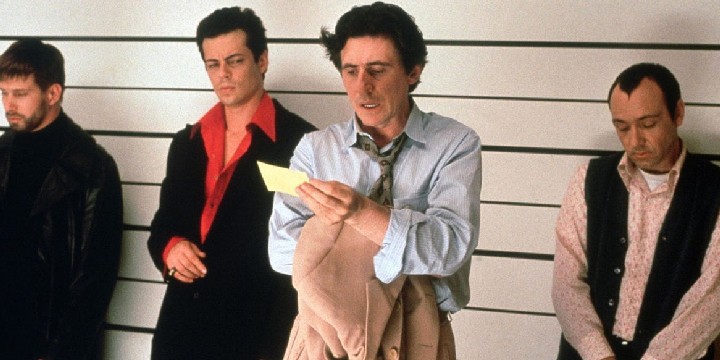 If you love movies full of twists, complicated deceit tactics, and views on corruption, then you’ll enjoy this list of The Usual Suspects quotes we’ve compiled!

There are very few movies in this world that won’t make the answer obvious at the very beginning. In fact, most of the time, you could already guess the ending by watching the first few minutes. This is why The Usual Suspects is such a refreshing movie.

It’s packed with many twists and turns, and you’ll constantly question if your guess is correct. Aside from that, The Usual Suspects gives its viewers a seemingly simple plot at the beginning and then suddenly drowns everyone in a series of complicated and brainy scenes.

In it, a prideful and confident officer, Agent Dave Kujan, interrogates an outwardly helpless and disabled man, Verbal Kint. Because of his pride, he didn’t want to consider that the person in front of him could be the suspect. Little did he know that the mastermind, Keyser Söze, was just smart enough to put on a convincing act playing Kint.

So, if you want to taste the games played by Keyser Söze, read the quotes we’ve gathered below. We’re positive you’ll feel like you’re part of all the action, too!

And don’t forget to check out these Raising Arizona quotes and They Live quotes.

1. “It was Keyser Söze, Agent Kujan. I mean the Devil himself. How do you shoot the Devil in the back? What if you miss?” – Verbal Kint

2. Kobayashi: “Mr. Redfoot knew nothing. Mr. Söze rarely works with the same people for very long, and they never know who they’re working for. One cannot be betrayed if one has no people.”

Fred Fenster: “So why are you telling us?”

Kobayashi: “Because you have stolen from Mr.Söze, Mr. Fenster. All of you. That you did not know you stole from him is the only reason you are still alive. He feels you owe him. You will repay your debt.”

3. “First day on the job, you know what I learned? How to spot a murderer. Let’s say you arrest three guys for the same killing. You put them all in jail overnight. The next morning, whoever’s sleeping is your man. You see, if you’re guilty, you know you’re caught, you get some rest, and you let your guard down.” – Agent Dave Kujan

5. “Who is Keyser Söze? He is supposed to be Turkish. Some say his father was German. Nobody believed he was real. Nobody ever saw him or knew anybody that ever worked directly for him, but to hear Kobayashi tell it, anybody could have worked for Söze. You never knew. That was his power. The greatest trick the Devil ever pulled was convincing the world he didn’t exist. And like that—poof! He’s gone.” – Verbal Kint

The Usual Suspects Quotes That Are Simply Unforgettable

7. Interrogation Cop: “I can put you in Queens on the night of the hijacking.”

Todd Hockney: “Really? I live in Queens. Did you put that together yourself, Einstein? What, do you got a team of monkeys working around the clock on this?”

Todd Hockney: “Yeah, I was just about to tell you to shut up.”

9. Interrogation Cop: “What are you saying?”

Fred Fenster: “Flip you. Flip ya for real.”

Fred Fenster: “Hand me the f*cking keys, you c*cksucker. What the f*ck?”

The Usual Suspects Quotes to Gain Wisdom From

11. “What the cops never figured out, and what I know now, was that these men would never break, never lie down, never bend over for anybody. Anybody.” – Verbal Kint

12. “A man can convince anyone he’s somebody else, but never himself.” – Verbal Kint

13. “To a cop, the explanation is never that complicated. It’s always simple. There’s no mystery to the street, no arch-criminal behind it all. If you got a dead body and you think his brother did it, you’re gonna find out you’re right.” – Verbal Kint

More The Usual Suspects Quotes for Fans of This Movie

16. “The way I hear it, Söze is some kind of butcher. A peerless, psycho, f*cked-up butcher.” – Fred Fenster

17. “If I told you the Loch Ness monster hired me to hit the harbor, what would you say?” – Verbal Kint

18. Fred Fenster: “You do some time; they never let you go. They treat me like a criminal. I’ll end up a criminal.”

Todd Hockney: “You are a criminal.”

Fred Fenster: “Why you gotta go and do that? I’m trying to make a point.”

19. Verbal Kint: “Where’s your head, Agent Kujan? Where do you think the pressure’s coming from? Keyser Söze—or whatever you want to call him—he knows where I am right now. He’s got the front burner under your *ss to let me go so he can scoop me up 10 minutes later. Immunity was just a deal with you *ssholes. I got a whole new problem when I post bail.”

Agent Dave Kujan: “So why play into his hands? We can protect you.”

Verbal Kint: “Oh, gee, thanks, Dave. Bang-up job so far. Extortion, coercion. You’ll pardon me if I ask you to kiss my pucker. The same f*ckers that rounded us up and sank us into this mess are gonna bail me out? F*ck you. You think you can catch Keyser Söze? You think a guy like that comes this close to getting caught and sticks his head out? If he comes up for anything, it will be to get rid of me. After that, my guess is you’ll never hear from him again.”

20. “Why are you just standing there, you idiot? I’m not speaking English, am I? Wouldn’t it make sense to find someone who could talk to me so you could find the person that set me on fire, perhaps? He is the Devil. You’ve never seen anyone like Keyser Söze in all your miserable life, you idiot. Keyser Söze. Do you at least understand that? Keyser Söze. The Devil himself. Or are you American policemen so stupid that you haven’t even heard of him? Keyser Söze, you ridiculous man. Keyser Söze.” – Arkosh Kovash

Who Did You Initially Think Was the Mastermind?

When you’re lying, it’s usually hard to keep up the facade. The pressure of someone discovering the truth will eventually drown you, and you’ll have no choice but to give in. However, in The Usual Suspects, Keyser Söze was the master bluffer.

While disguised as Verbal Kint, no one could be 100% sure which parts of his story were true or not. In fact, we’d guarantee that each viewer was getting lost in circles trying to find out who the culprit was before it was revealed in the movie.

He was great at deceit and took advantage of Agent Kujan’s lack of foresight, arrogance, and pride. Later in the movie, we also see how regretful Kujan is as he sees Verbal Kint—Keyser Söze—limping and then suddenly walking straight down the street as a free man.

Through Agent Kujuan’s mistake, we learn that it’s essential to be open to all possibilities. Even when you think you’re sure, never close off your ears to hear another side of the story. Who knows, you might be missing something important!

After all, no matter how smart you think you are, you’re still human and prone to making mistakes. With that, let these The Usual Suspects quotes give you a better understanding of pride, arrogance, and more. Whenever you need a refresher, feel free to revisit this list!