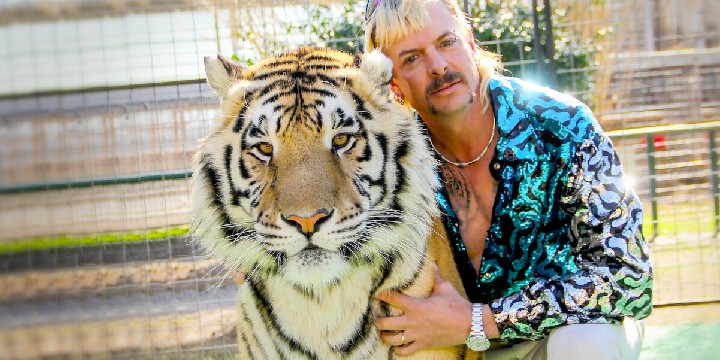 If you like big cats and other wild animals, this collection of the top 50 Tiger King quotes is for you!

Tiger King is a true crime documentary television series that aired on Netflix in 2020. No one can contest how strange and unique it is, but that is precisely what makes this series so enjoyable. It also revealed each characters’ beliefs about animal welfare and management.

Viewers may go insane while watching it, but it is well worth it because of all the fun and lessons it has. Check out the quotes below for some great examples of the show’s uniqueness. We’re sure you’ll find pearls of wisdom and truth that are still relevant today.

And don’t miss out these tiger quotes and lion quotes.

1. “I went to work every day prepared to die in a tiger cage. Dying doesn’t scare me. At all.” – Joe Exotic

3. “You can see how they go from being so sweet to tearing your face off, just like that, and it’s amazing to have that range.” – Carole Baskins

5. “It is a ticking time bomb if somebody thinks they’re going to walk in here and take my animals away. It’s gonna be a small Waco.” – Joe Exotic

6. “Animals don’t judge you, as long as you’re really good at heart. They don’t care who you are or what you’ve done in the past.” – Joe Exotic

8. “This is my little town. I’m the mayor, the prosecutor, the cop, and the executioner.” – Joe Exotic

9. “This is the thing you don’t want when you have tigers, folks. It’s a real-life tornado, and there ain’t nothin’ you can do besides protecting yourself.” – Joe Exotic

10. “I live, eat, and breathe ending the captivity of wild cats.” – Joe Exotic

11. “Before you bring me down, it is my belief that you will stop breathing.” – Joe Exotic

13. “We say no to drugs because drugs make your teeth fall out and you get really ugly and don’t have any friends.” – Joe Exotic

14. “I can assure you’re going to get closer to tigers and lions here than you would anywhere in the world. Matter of fact, you’re gonna get so close I can almost promise you some of you will be urinated on.” – Joe Exotic

16. “My email says, ‘Judge me by the enemies I have made.’ So I really appreciate the fact that none of these people like me.” – Carole Baskin

17. “I am never gonna financially recover from this.” – Joe Exotic

19. “I am gay as a three dollar bill, and I’m standing in a cage with five full-grown tigers and lions.” – Joe Exotic

21. “The cats were my responsibility, no matter who owns the zoo.” – Joe Exotic

22. “There is a very emotional connection between me and these cats. Extreme.” – Joe Exotic

23. “Does it feel good to stand on my stage with 500-pound tigers and everybody envy you? Absolutely.” – Joe Exotic

25. “You know, people only care about saving what affects them.” – Joe Exotic

27. “It’s just two complete opposite, different worlds. You know, he’s a little more upscale, and I’m working with people that just got out of prison.” – Joe Exotic

28. “We’ve got varying versions of what happened. In order for there to be justice, there has to be the truth.” – Joe Exotic

29. “They strip you butt naked, put you in a six-by-eight-foot concrete room with no windows, no blankets, no nothing. I am supposed to be in this country born, raised, innocent until proven guilty. And I’ve been stripped off my clothes, my rights, my identity, my dignity.” – Joe Exotic

32. “We’ve had whistleblowers come up to us and say they’ve heard a gunshot in the middle of the night and the next day there’s no cat. But they don’t know where the cat went. And I think these people are smart enough to only use their very closest circle of people that they’ve got good dirt on that they would use to dispose of a body because it takes a few people to lift a big cat—unless you part it out right there.” – Carole Baskin

33. “I don’t watch the news on television unless there’s a cat involved.” – Carole Baskin

34. “I posted online 28 different places that are all part of this whole, what I call ‘the bad guy network,’ of people that are breeding cubs and selling cubs.” – Carole Baskin

35. “And those cubs are only cute and manageable until they’re about 12 weeks old. By the time they’re about 13 weeks old the people who are using them for these photo booths find that it costs $10,000 a year to take care of them, so they give them away. They sell them.” – Carole Baskin

36. “I don’t pay anybody to do animal care, because people will do that for free.” – Carole Baskin

37. “Our mission is to ban the private possession of these magnificent animals.” – Carole Baskin

38. “People like Joe have an amazing grip over people generating affection and a devotion that is totally irrational.” – Howard Baskin

39. “I’ve never been a person that had friends, and so my friends were two imaginary white cats.” – Carole Baskin

40. “Carole is the Mother Teresa of cats.” – Howard Baskin

43. “Most of us are not ruthless. People who love animals are rarely ruthless.” – Dr. Bhagavan Antle

44. “You know, there’s not every day that a zookeeper went to prison for murder-for-hire. So, I’m sure y’all got a story to tell.” – John Reinke

45. “Nothing is cooler, sexier, and more significant to the world we live in today than a tiger.” – Dr. Bhagavan Antle

More Tiger King Quotes for Fans of the Show

47. “Me and Joe made a pact. If anything went wrong, we were gonna shoot each other. And then that day, I put our names on our bullets right here.” – John Reinke

48. “So the whole world’s wondering, did you actually grind your husband up and feed him to the tigers so there’s no evidence? I’m gonna show you some stuff that will put that right in your head.” – Joe Exotic

49. “Breeding was his whole thing. The whole idea was to keep baby tigers from being born.” – Rick Kirkham

50. “A tiger needs 400 square miles of territory in the wild. So there’s no cage that’s going to be sufficient.” – Carole Baskin

Do You Think Tiger King Is Worth Watching?

Zoos are a great way for people to get a glimpse of the animal kingdom that would otherwise be hard for us to get to know. But, the question of whether it’s ethical or not is still being asked today.

In the series, Joe Exotic is being suspected of animal exploitation and abuse. This put him at odds with Carole Baskin, an animal welfare advocate and owner of Big Cat Rescue. Just through this, we can see how intense the tension is between these two strong personalities.

At first glance, you might think this show is strange. But as the story progresses, it becomes exciting, and we’re left with many questions and clues as to what it’s really about. We can’t help but wonder what the directors, writers, and producers are trying to convey to the audience.

However unique and exotic the show may be, it still opened our eyes to the realities of animal abuse and exploitation. It made us think about animals’ fate and living conditions in the zoo and other similar facilities. Tiger King may contain absurd things and lines, but it also has truths that we need to know.

If you don’t view the series through such a philosophical lens, you’ll never understand its more profound message. With that, we hope this collection was able to enlighten you on the significance of animal rights and proper care.

Which quotes piqued your interest? Please, leave a comment down below.