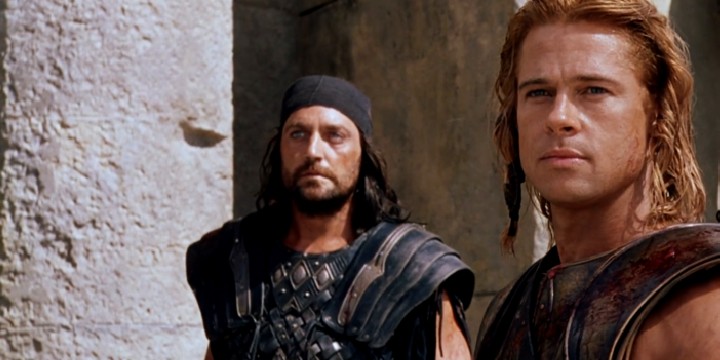 Get ready for action-packed scenes and meaningful conversations by reading through these Troy quotes we’ve gathered for you!

Troy is a classic historical movie released in 2004 based on the Trojan War. As our history goes, a legendary war was triggered when Helen of Sparta chose to go with Paris of Troy, with whom she had an affair. With his heart and pride struck, Menelaus, her husband, launched many ships to Troy.

At first, you might believe that the Trojan War is a battle for love. But really, it consisted of different people with goals and ambitions motivated by their very own self-interest. King Agamemnon battled for dominance, Menelaus for vengeance, Hector for his nation, Paris for his love, and Achilles for his honor.

Ultimately, no one achieved true victory. After all, war is proof that no matter how powerful you are, you can never succeed if your intentions are not pure or for the good of the people.

So, before entering any battle, make sure that your reason is for the sake of the majority. Keep reading to learn more about the war that marked our history.

And don’t forget to check out these Meet Joe Black quotes and Divergent quotes.

2. “I’ll tell you a secret. Something they don’t teach you in your temple. The Gods envy us. They envy us because we’re mortal. Because any moment might be our last. Everything is more beautiful because we’re doomed. You will never be lovelier than you are now. We will never be here again.” – Achilles

Briseis: “To be a great warrior.”

Achilles: “I chose nothing. I was born, and this is what I am.”

4. “I’ve fought many wars in my time. Some I’ve fought for land, some for power, some for glory. I suppose fighting for love makes more sense than all the rest.” – Priam

6. “Men are haunted by the vastness of eternity. And so we ask ourselves, will our actions echo across the centuries? Will strangers hear our names long after we are gone and wonder who we were, how bravely we fought, how fiercely we loved?” – Odysseus

7. Achilles: “Of all the kings of Greece, I respect you most. But in this war, you’re a servant. And I refuse to be a servant any longer.”

Odysseus: “Sometimes you need to serve in order to lead. I hope you understand that one day.”

Achilles: “Everyone dies, whether today or 50 years from now.”

9. Achilles: “Imagine a king who fights his own battles. Wouldn’t that be a sight?”

Agamemnon: “Of all the warlords loved by the gods, I hate him the most.”

10. “All my life, I’ve lived by a code, and the code is simple. Honor the gods, love your woman, and defend your country. Troy is mother to us all. Fight for her!” – Hector

Achilles: “Perhaps the kings were too far behind to see the soldiers won the battle.”

Agamemnon: “History remembers kings, not soldiers! Tomorrow we’ll battle down the gates of Troy. I’ll build monuments for victory on every island of Greece. I’ll carve Agamemnon in the stones.”

Achilles: “Be careful, king of kings. First, you need the victory.”

12. Achilles: “Go home, prince. Drink some wine, and make love to your wife. Tomorrow, we’ll have our war.”

Hector: “You speak of war as if it’s a game. But how many wives wait at Troy’s gates for husbands they’ll never see again?”

Achilles: “Perhaps your brother can comfort them. I hear he’s good at charming other men’s wives.”

Achilles: “Why kill you now, Prince of Troy, with no one here to see you fall?”

Briseis: “Guests can leave whenever they want.”

Troy Quotes to Get a Taste of History

Priam: “You’re still my enemy tonight. But even enemies can show respect.”

16. Hector: “Do you know what you have done? Do you know how many years our father worked for peace?”

Hector: “Ugh. It’s all a game to you, isn’t it? You roam from town to town, bedding merchants’ wives and temple maids, and you think you know something about love? What about your father’s love? You spat on him when you brought her onto this ship! What about the love for your country? You’d let Troy burn for this woman? I won’t let you start a war for her.”

Paris: “May I speak? If what you say is true. I’ve wronged you. I’ve wronged our father. If you want to take Helen back to Sparta, so be it! But I go with her.”

Hector: “To Sparta, they’ll kill you.”

Hector: “Oh, and that sounds heroic to you, doesn’t it? To die fighting. Tell me, little brother, have you ever killed a man?”

Hector: “Ever seen a man die in combat?”

Hector: “You already have.”

Priam: “I have endured what no one on earth has endured before. I kissed the hands of the man who killed my son.”

Achilles: “Priam? How did you get in here?”

Priam: “I know my country better than the Greeks, I think.”

Achilles: “You are a brave man. I could have your head on a spit in the blink of an eye.”

Priam: “Do you really think death frightens me now? I watched my eldest son die, watched you drag his body behind your chariot. Give him back to me. He deserves a proper burial; you know that. Give him to me.”

Achilles: “He killed my cousin.”

Priam: “He thought it was you. How many cousins have you killed? How many sons and fathers and brothers and husbands? How many, brave Achilles?”

Troy Quotes That Are Worth Reading

18. “Your reputation for hospitality is fast becoming a legend.” – Odysseus

19. “This war will never be forgotten, nor will the heroes who fought in it.” – Odysseus

Odysseus: “Women have a way of complicating things.”

22. “I loved my boy from the moment he opened his eyes until the moment you closed them.” – Priam

23. Achilles: “You were brave to fight them. You have courage.”

Briseis: “To fight back when I’m attacked? A dog has that kind of courage.”

24. Messenger Boy: “Are the stories true? They say your mother was an immortal goddess. They say you can’t be killed.”

Achilles: “I wouldn’t be bothering with the shield then, would I?”

Messenger Boy: “The Thessalonian you’re fighting, he’s the biggest man I’ve ever seen. I wouldn’t want to fight him.”

Achilles: “That’s why no one will remember your name.”

25. “If they ever tell my story, let them say that I walked with giants. Men rise and fall like the winter wheat, but these names will never die. Let them say I lived in the time of Hector and of Achilles.” – Odysseus

What Drives You to Persevere and Win a Battle?

Troy is a movie that takes us back to the exciting and thought-provoking events during the Trojan War. Some might still believe that it’s all part of a myth. Nonetheless, we learn valuable lessons from each character.

War is part of our everyday lives and not just history. Even responding to your enemy or venting on social media is already considered a battle against yourself. The inside battle is the biggest and first one you must conquer daily, as it’ll define your character and how the rest of your day goes.

In these situations, make sure you don’t allow yourself to be someone easily provoked. You must think before you act and consider all possible consequences of your words and actions.

You should never make a decision based on what you are currently feeling because it will consume you. Instead, stop for a moment and use your mind to think about what’s best for you and other people.

Hopefully, reading these Troy quotes was able to inspire you to be genuine in every battle you go through. Keep in mind that all decisions have consequences. You can decide if you want an amazing or awful one.