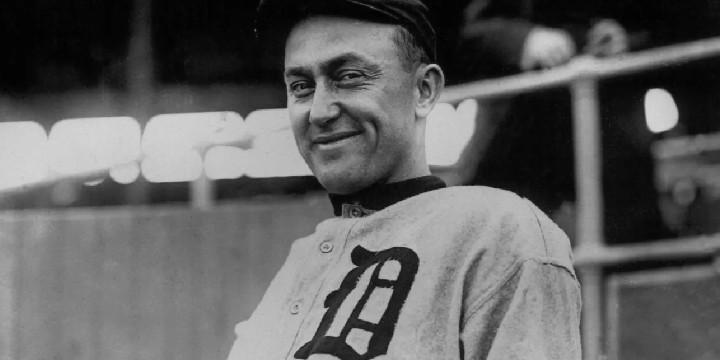 Reading these Ty Cobb quotes will give you a completely new view of who he was as a person and as a player.

Among other names and personalities in baseball, none would be as notorious as Ty Cobb.

His career in the major leagues was mainly composed of his time with the Detroit Tigers, but he also played with the Philadelphia Athletics. Ty Cobb is also famous for being the first-ever player voted into the Baseball Hall of Fame.

Looking at his numbers and stats, you’ll see him as an outstanding and remarkable player. But, his career was also plagued with many allegations about his character and morals. Ty Cobb was viewed as an aggressive, rowdy, and racist player who allegedly spiked his cleats to injure his fellow players.

Over the years, a lot of these claims were cleared up. But, the image of his aggressiveness remained; this is because Ty Cobb was indeed a determined player with the drive to win every game. His career may not have been all positive, but there are still many wise leadership and life lessons we can learn from him.

And don’t forget to check out these baseball quotes and Willie Mays quotes.

1. “Baseball is a red-blooded sport for red-blooded men. It’s no pink tea, and mollycoddles had better stay out. It’s a struggle for supremacy⁠—a survival of the fittest.”

2. “Every great batter works on the theory that the pitcher is more afraid of him than he is of the pitcher.”

3. “Speed is a great asset, but it’s greater when it’s combined with quickness⁠—and there’s a big difference.”

4. “I never could stand losing. Second place didn’t interest me. I had a fire in my belly.”

5. “I had to fight all my life to survive. They were all against me, but I beat the bastards and left them in the ditch.”

8. “I may have been fierce, but never low or underhand.”

9. “The most important part of a player’s body is above his shoulders.”

12. “The great American game should be an unrelenting war of nerves.”

14. “I have observed that baseball is not unlike a war, and when you come right down to it, we batters are the heavy artillery.”

15. “The great trouble with baseball today is that most of the players are in the game for the money, and that’s it, not for the love of it, the excitement of it, the thrill of it.”

16. “Most collisions out on the fields are needless. Keep your ears open while you’re concentrating on running toward the ball and stick to the tested formula, boys.”

17. “Rarely should a base runner risk a steal when the game is in balance. It’s to be used when you can afford to fail.”

19. “When I began playing the game, baseball was about as gentlemanly as a kick in the crotch.”

20. “The base paths belonged to me, the runner. The rules gave me the right. I always went into a bag full speed, feet first. I had sharp spikes on my shoes. If the baseman stood where he had no business to be and got hurt, that was his fault.”

21. “The first time I faced him, I watched him take that easy windup, and then something went past me that made me flinch. The thing just hissed with danger. We couldn’t touch him. Every one of us knew we’d met the most powerful arm ever turned loose in a ballpark.”

22. “Joe’s swing was purely natural; he was the perfect hitter. He batted against spitballs, shine balls, emery balls, and all the other trick deliveries. He never figured anything out or studied anything with the same scientific approach I gave it. He just swung. If he’d ever had any knowledge of batting, his average would have been phenomenal. He seemed content to just punch the ball, and I can still see those line drives whistling to the far precincts. Joe Jackson hit the ball harder than any man ever to play baseball.”

Interesting Ty Cobb Quotes to Get To Know Him Better

25. “I’ve been called one of the hardest bargainers who ever held out, and I’m proud of it.”

26. “I think if I had my life to live over again, I’d do things a little different. I was aggressive, perhaps too aggressive. Maybe I went too far. I always had to be right in any argument I was in; I always had to be first in everything. I do indeed think I would have done some things different. And if I had, I believe I would have had more friends.”

27. “Why not? Certainly it is okay for them to play. I see no reason in the world why we shouldn’t compete with colored athletes as long as they conduct themselves with politeness and gentility. Let me also say that no White man has the right to be less of a gentleman than a colored man. In my book, that goes not only for baseball but in all walks of life.”

28. “The longer I live, the longer I realize that batting is more a mental matter than it is physical. The ability to grasp the bat, swing at the proper time, and take a proper stance; all these are elemental. Batting is rather a study in psychology, a sizing up of a pitcher and catcher and observing little details that are of immense importance. It’s like the study of crime, the work of a detective as he picks up clues.”

29. “Walter Johnson’s fastball looked about the size of a watermelon seed, and it hissed at you as it passed.”

30. “No man has ever been a perfect ballplayer. Stan Musial, however, is the closest to being perfect in the game today.”

31. “He was the finest natural hitter in the history of the game.”

32. “When you shout, ‘I’ll take it!’ or ‘I’ve got it!’ shout it loudly and clearly. Give that signal the instant you feel the play belongs to you and not your teammate. After that, the responsibility for the catch is yours. If you call for it, you have the confidence to play the ball, knowing you are on your own and safe from injury.”

33. “The way those clubs shift against Ted Williams, I can’t understand how he can be so stupid not to accept the challenge to him and hit to left field.”

34. “Every man in the game, from the minors on up, is not only fighting against the other side, but he’s trying to hold onto his own job against those on his own bench who’d love to take it away. Why deny this? Why minimize it? Why not boldly admit it?”

35. “You can still run, and you still can hit. Drink a little wine before dinner, and you’ll play for years.”

36. “When two doctors pass each other on the street, they wink at each other.”

37. “I regret to this day that I never went to college. I feel I should have been a doctor.”

38. “That god damned Dutchman is the only man in the game I can’t scare.”

39. “When I came to Detroit, I was just a mild-mannered Sunday schoolboy.”

40. “The best recommendation for an umpire in the old days was, ‘He licked somebody in the Three-I League.’ He ought to do.”

Do You Believe the Claims and Allegations Against Ty Cobb?

From the outside looking in, it’s easy to judge a person for how he acts on the sidelines. In the worst-case scenarios, people tend to judge others based merely on hearsay and others’ gossip. But, did anyone stop to think about what really happened or what drove one to act a certain way?

Ty Cobb indeed had an aggressive personality⁠; after all, he was known as a brawler who had a very quick temper and short patience. This does not mean his untoward actions were justifiable. However, maybe categorizing him under specific criteria like being a racist or a killer is too much.

In fact, after his death, many people discovered how gallant he was⁠—funding Royston, Georgia’s first hospital. They also found evidence of him writing letters to kids and fans, thanking them for their support.

But, more than that, even though he was thought to be an embarrassment in baseball, no one can contest his unbeatable contributions to the field. He had many flaws, both in the game and in his daily life, but they prove just how human he was.

He may have passed, but his greatness in the field will live on and be remembered forever. With that, we hope this list of the best Ty Cobb quotes was able to give you a sneak peek into both sides of his story.

Are you a fan of baseball or Ty Cobb? Did we miss any other good quotes from him? Please, list them below!