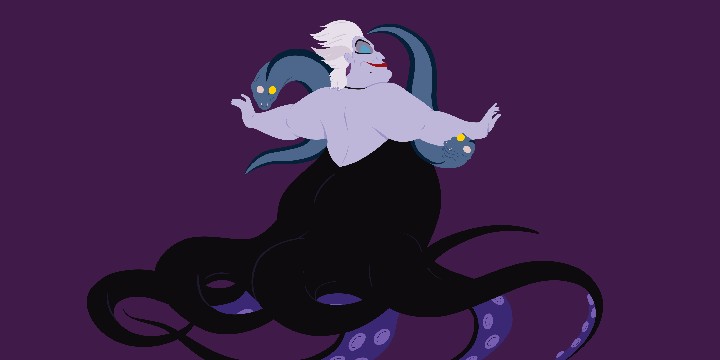 Enter the world of the sea by reading these Ursula quotes that will entertain you and fill you with laughter.

Ursula was introduced to the world as the primary antagonist of The Little Mermaid. She is a sea witch who made a deal with Ariel to turn her into a human and be with Prince Eric in exchange for her voice.

Although her intentions may look shallow and petty, Ursula formed a contract with Ariel in hopes of taking over the throne of the undersea kingdom. She is definitely an intelligent villain with big dreams and badass powers.

Aside from her entertaining story, her lines are gems full of evil and wit. So, don’t miss out on these Ursula quotes by adding this collection to your must-read list now.

And don’t forget to check out these The Little Mermaid quotes.

2. “A woman doesn’t know how powerful her voice is until she has been silenced.”

4. “You can’t get something for nothing, you know.”

6. “I’ve mended all my ways, repented, seen the light, and made a switch.”

8. “Come on, you poor unfortunate soul. Go ahead! Make your choice!”

9. “We have no immortal souls. We have no future life. We are just like the green seaweed, which, once cut down, can never revive again! Men, on the other hand, have a soul that lives forever, lives after the body has become dust. It rises through the clear air, up to the shining stars!”

10. “You can’t keep making important decisions with your eyes.”

13. “Come in, my child. We mustn’t lurk in doorways. It’s rude. One might question your upbringing.”

14. “Now, look at me, wasted away to practically nothing.”

15. “Well, it’s time Ursula took matters into her own tentacles!”

16. “Yes, I have had my share of complaints, but on the whole, I’ve been a saint to those poor unfortunate souls!”

17. “Well, she’s better than I thought. At this rate, he’ll be kissing her by sunset for sure!”

19. “You’ll have your looks, your pretty face. And don’t underestimate the importance of body language!”

20. “Triton’s daughter will be mine, and then, I’ll make him writhe. I’ll see him wriggle like a worm on a hook!”

21. “They weren’t kidding when they called me a witch!”

22. “In my day, we had fantastical feasts when I lived in the palace.”

23. “I know what you want. It is very stupid of you, but you shall have your way, and it will bring you to sorrow, my pretty princess.”

Wicked Ursula Quotes to Remember the Power of the Sea Witch

25. “Yes, indeed! Now, it’s happened once or twice, someone couldn’t pay the price, and I’m afraid I have to rake them across the coals!”

26. “Now, here’s the deal. I will make you a potion that will turn you into a human for three days. Got that?”

28. “Flotsam! Jetsam! I want you to keep an extra close watch on this pretty little daughter of his. She may be the key to Triton’s undoing.”

31. “I’m not asking much. Just a token, really. A trifle. You’ll never even miss it. What I want from you is your voice.”

Ursula Quotes for Those Who Need Relationship Advice

32. “The men up there don’t like a lot of blabber. They think a girl who gossips is a bore.”

33. “But they dote and swoon and fawn on a lady who’s withdrawn.”

35. “Now listen, this is important. Before the sun sets on the third day, you’ve got to get dear ol’ princey to fall in love with you. That is, he’s got to kiss you. Not just any kiss. The kiss of true love.”

36. “Well, angelfish, the solution to your problem is simple. The only way to get what you want is to become a human yourself.”

37. “Which would you rather be? The King of the Sea or a father to his little girl?”

38. “Oh no, but I do, dumpling. We’re so very alike, you and I, gals with ambition! Now, tell me absolutely everything.”

39. “My dear sweet child, that’s what I do. It’s what I live for, to help unfortunate merfolk like yourself, poor souls with no one else to turn to.”

40. “The truth is that the ocean wasn’t big enough for both your father and me, so he sent me here.”

42. “Her daddy will love that. King Triton’s headstrong, lovesick girl would make a charming addition to my little garden.”

44. “Things are working out according to my ultimate design. Soon, I’ll have that little mermaid, and the ocean will be mine!”

Funny Ursula Quotes to Entertain You

49. “That was too close for comfort, boys! One day and they’re dining together?”

50. Ursula: “I should’ve known! There’s only one thing more potent than my black magic.”

Jetsam: “The power of true love?”

Did These Quotes Convince You That Ursula Is the Best Disney Villain?

Ursula may be selfish and evil, but everyone can still learn from her story. After all, she has the brains and the courage to accomplish her ambitions in life.

As an evil sea witch, Ursula never bothered to hide her true intentions and motivations. She trusts herself and her intelligence to make the most out of the situation and strike a deal with merpeople. Moreover, unlike most Disney villains, she exhibits strength and fearlessness in trying to get her wants in life.

Most of us don’t have Ursula’s traits due to our self-doubts and low self-esteem. With her help, we learn about confidence and self-trust. However, we should remember to use these positive traits for good and not evil!

Which Ursula quote is your favorite? Do you have other Disney villains that you like? Comment your answers below!