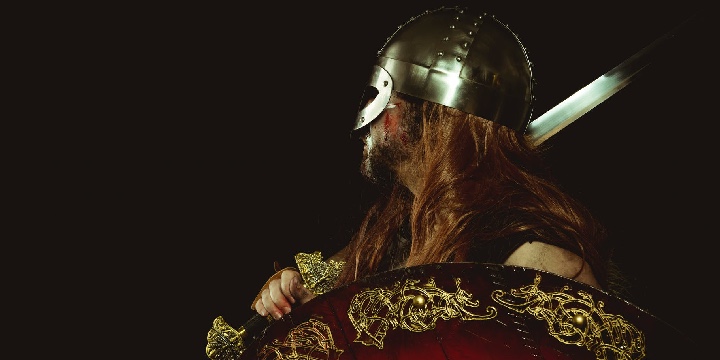 These Viking quotes will help shape you into a great conqueror by covering diverse topics such as battle, love, and honor.

The term “Vikings” refers to seafaring people from Scandinavia. They were composed of landowning chieftains and clan heads looking for adventure overseas. Despite their image as barbaric fighters, their achievements significantly impacted European culture.

There are so many things we can learn from their history and culture. That’s why we’ve rounded up some of the best quotes about these brave and wise warriors!

And make sure to read these samurai quotes and warrior quotes.

1. “When men encounter enemies in the fight, a robust heart is better than a sharp sword.” – Volsunga Saga

2. “The brave man shall fight and win, though dull his blade may be.” – Fafnismal

3. “Better to fight and fall than to live without hope.” – Volsunga Saga

4. “The foolish man thinks he will live forever if he keeps away from fighting; but old age won’t grant him a truce, even if the spears do.” – Havamal

5. “Many are brave but do not redden their sword in the chest of another.” – Egil’s Saga

6. “Oftentimes it is not numbers that wins the victory, but those who fare forward with the most vigor.” – The Saga of Thrond of Gate

9. “Fight your enemies in the field, don’t burn in your home.” – Volsunga Saga

10. “No matter how cautiously you live there is no escaping the fatal clutches of old age. So then, better to join the fray and fight proudly for something worth obtaining.” – Anonymous

13. “No Viking believed he could change his destiny, ordained as it was by the Norns who wove the fates of gods and men alike but, for all that, the way in which he lived his life was up to him.” – Kevin Crossley-Holland

14. “The Vikings did not only tear down, they also built up; they adapted to the lands they were grafted into, but also confirmed these lands unto themselves.” – David Gray Rodgers and Kurt Noer

16. “When the spring comes, and my blood heats up, I want nothing more than to raid and fight.” – Björn Ironside

17. “Warriors don’t show their heart until the ax reveals it.” – Floki

18. “Where you recognize evil, speak out against it, and give no truces to your enemies.” – Odin

19. “When faring on journeys, ward yourself well. Take no harbor near the highway for thereby dwelling many ill weights for men’s bewilderment.” – Volsunga Saga

20. “Never walk away from home ahead of your ax and sword. You can’t feel a battle in your bones or foresee a fight.” – The Havamal

21. “Honor and daring, valor, strength and agility, all these were qualities the Vikings prized and upheld. There was another, somewhat less admirable side to their nature as warriors that the Vikings were only too pleased to highlight. This was their brutality toward their foes.” – Robert Wernick

22. “With many who come to power and honor, pride keeps pace with promotion.” – The Saga of Magnus the Good

23. “Better to die with honor than live with shame.” – The Saga of the Jomsvikings

24. “It is their lot who stand with the great that they enjoy high honors, and are more respected than others, but stand often in danger of their lives.” – The Saga of Olaf Haraldsson

25. “Honor is life for without honor one may well be dead.” – Anonymous

26. “Fear not death for the hour of your doom is set and none may escape it.” – Volsunga Saga

27. “It often happens that he who gets a death wound yet avenges himself.” – The Story of Hreidar the Fool

28. “Many have been brought to death by overconfidence.” – Grettir Saga

29. “Give kind heed to the dead, sick-dead, sea-dead, or word-dead; treat their bodies with respect and see that they are laid to rest with respect.” – Volsunga Saga

Viking Quotes on the Valhalla

31. “Valgrind is the lattice called, in the plain that stands, holy before the holy gates: ancient is that lattice, but few only know how it is closed with a lock.” – Grímnismál

32. “Gates all, before you go, you must examine well; for you cannot know where enemies sit in the house before you.” – Gylfe’s Journey To Asgard

33. “Five hundred doors, and forty eke, I think, are in Valhall. Eight hundred Einherjar will at once from each door go when they issue with the wolf to fight.” – Grímnismál

34. “Gladsheim the fifth is named, there the golden-bright Valhall stands spacious, there Hropt selects each day those men who die by weapons.” – Grímnismál

35. “Easily to be known is, by those who to Odin come, the mansion by its aspect. Its roof with spears is laid, its hall with shields is decked, with corsets and its benches strewed.” – Grímnismál

36. “The more folk stand in the way of two hearts that yearn for each other, the hotter the flame of love waxes.” – The Story of Viglund the Fair

37. “Never a whit should one blame another for a folly which has many befalls; the might of love makes sons of men into fools who once were wise.” – The Havamal

38. “Good to love good things when all goes according to thy heart’s desire.” – Volsunga Saga

39. “Go you must. No guest shall stay in one place forever. Love will be lost if you sit too long at a friend’s fire.” – The Havamal

43. “Be kind to friend and kin, and reward not their trespasses against you; bear and forbear, and win for yourself thereby long enduring praise of men.” – Volsunga Saga

44. “Everyone has some friends even among his enemies.” – The Saga Of Olaf Haraldsson

45. “One’s back is vulnerable unless one has a brother.” – Grettir Saga

46. “Travel far and wide and you should possess the secrets of man.” – Viking Proverb

47. “Power is only given to those who are prepared to lower themselves to pick it up.” – Ragnar

48. “The error is the result of letting fear rule your actions.” – The Saga of Harald Hardrade

49. “Who can’t defend the wealth they have must die, or share with the rover boldly.” – The Saga of Olaf Haraldsson

50. “When fear leads the way the destination is never glorious.” – Anonymous

51. “There’s always a better choice than cowardice if you have a business to take care of.” – Norse Mythology

52. “A sword age, a wind age, a wolf age. No longer is there mercy among men.” – Snorri Sturluson

53. “When a real battle starts, you’ll always find that there is no bravest man.” – The Poetic Edda

54. “Even in the sheath the sword must be sharp—so too must the mind and the spirit be within the body.” – Viking Proverb

55. “The gods are man’s creation to give answers that they are too afraid to give themselves.” – Ragnar

More Viking Quotes That You Will Learn From

56. “Wake early if you want another man’s life or land. No lamb for the lazy wolf. No battle’s won in bed.” – The Havamal

57. “Seldom will a voyage go well if the men are at odds.” – The Foster-brother’s Saga

58. “ A man should have his plans worked out before he enters into great undertakings or incites others to them.”The Saga of Ref the Sly

59. “All a people need in order to rise up against tyranny is a leader bold enough to take up the banner.” – The Saga of Harald Hardrade

60. “Always remember to finish off your opponent, if you can. No man ever ran away with his entrails hanging to his knees, or his head cut off.” – Rollo

61. “The idea of fate permeated the religion of the Vikings at every turn. Everything in the universe, even the Gods, was subject to it.” – Daniel McCoy

62. “You Vikings are incorrigible. You emerge from the womb with only one thing on your mind—how to die.” – King Ecbert

63. “The Norsemen may have begun as raiders, but they developed into skilled conquerors and competent administrators.” – Robert Wernick

64. “Man without a sword is still a warrior, but one with no shield is just a target.” – Robert Low

65. “It is better to stand and fight. If you run, you will only die tired.” – Viking Proverb

66. “It is a wise leader who considers the needs of others.” – Assassin’s Creed Valhalla

67. “Power is always dangerous. It attracts the worst. And corrupts the best.” – Ragnar

68. “All door-ways, before going forward, should be looked at; for it is difficult to know where foes may sit within a dwelling.” – Viking Proverb

69. “In the ancient poetry of the Norse, to feed the raven meant to kill the enemy, providing a meal for beasts that feed on carrion.” – Anders Winroth

70. “If aware that another is wicked, say so: make no truce or treaty with foes.” – Viking Proverb

Do You Admire the Vikings’ Knowledge and Bravery?

The Vikings are extraordinary people who shaped their own culture and left a legacy that transcends time. They made their mark as traders, explorers, and warriors. At home, they are self-sufficient farmers, but at sea, they are raiders and pillagers.

The exact reasons for them leaving their homeland are unknown. Some speculate that it was due to overpopulation, but the earliest Vikings were looking for riches, not land.

Some people believe that the Vikings’ only legacy is bloodshed and violence. But, when we look past their brutal and bloodthirsty battles, there is so much we can learn from their way of life.

Through them, we learn that to become a better person, we must go forth, expand, and conquer. Do what you can to rise above our current status. Believe that you have a higher purpose and do what you can to leave your own mark in the world!

Did you enjoy reading our collection? Which quotes piqued your interest? Drop them down below!