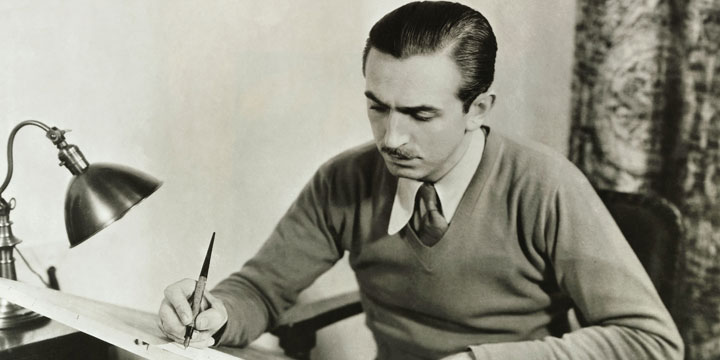 People of all ages and backgrounds can learn a lot from this list of the best Walt Disney quotes!

However old you may be, or whichever part of the world you live in, there’s no doubt you’ve watched or heard of at least one Disney movie.

The studio’s influence is something no one can contest. And, though it may be as big as it is now, it all started from the humble beginnings of one man—Walt Disney.

He went through several jobs and many failures before his big success when he introduced Mickey Mouse to the world in 1928.

Walt Disney carefully crafted Mickey’s character, and it paid off as he became one of the most popular and influential characters to date.

Walt Disney indeed became a success, but it wasn’t without many difficulties and setbacks.

However, he believed in his dreams and dared make them realities. This quality of his, in fact, is one of the things that makes him so admirable.

We can all learn from Walt Disney’s wise words and eye-opening quotes.

So, if you want to know more about the man behind this mega entertainment company, make sure you scroll through to the end!

And don’t forget to check out these Thomas Edison quotes.

1. “Laughter is timeless, imagination has no age, dreams are forever.”

2. “When you’re curious, you find lots of interesting things to do.”

3. “All our dreams can come true if we have the courage to pursue them.”

5. “Happiness is a state of mind. It’s just according to the way you look at things.”

7. “The way to get started is to quit talking and begin doing.”

9. “That’s the real trouble with the world, too many people grow up. They forget.”

Walt Disney Quotes to Inspire You

11. “When you believe in a thing, believe in it all the way—implicitly and unquestionable.”

12. “To the youngsters of today, I say believe in the future, the world is getting better; there still is plenty of opportunity.”

13. “Everyone falls down. Getting back up is how you learn how to walk.”

14. “Never get bored or cynical. Yesterday is a thing of the past.”

15. “You may not realize it when it happens, but a kick in the teeth may be the best thing in the world for you.”

16. “Why worry? If you’ve done the very best you can, then worrying won’t make it any better.”

18. “The more you are in a state of gratitude, the more you will attract things to be grateful for.”

21. “Life is composed of lights and shadows, and we would be untruthful, insincere, and saccharine if we tried to pretend there were no shadows.”

23. “All you’ve got to do is own up to your ignorance honestly, and you’ll find people who are eager to fill your head with information.”

24. “I always like to look on the optimistic side of life, but I am realistic enough to know that life is a complex matter.”

25. “The greatest moments in life are not concerned with selfish achievements but rather with the things we do for the people we love and esteem, and whose respect we need.”

28. “Dreams, ideas, and plans not only are an escape; they give me purpose—a reason to hang on.”

29. “I dream, I test my dreams against my beliefs, I dare to take risks, and I execute my vision to make those dreams come true.”

30. “I suppose my formula might be: dream, diversify, and never miss an angle.”

31. “You can dream, create, design, and build the most wonderful place in the world, but it requires people to make the dream a reality.”

32. “We share, to a large extent, one another’s fate. We help create those circumstances which favor or challenge us in meeting our objectives and realizing our dreams.”

33. “Somehow I can’t believe that there are any heights that can’t be scaled by a man who knows the secrets of making dreams come true. This special secret, it seems to me, can be summarized in four C’s. They are curiosity, confidence, courage, and constancy.”

34. “The difference between winning and losing is most often not quitting.”

36. “Do a good job. You don’t have to worry about the money; it will take care of itself. Just do your best work—then try to trump it.”

38. “People often ask me if I know the secret of success and if I could tell others how to make their dreams come true. My answer is, you do it by working.”

39. “Everyone needs deadlines. Even the beavers. They loaf around all summer, but when they are faced with the winter deadline, they work like fury. If we didn’t have deadlines, we’d stagnate.”

40. “A person should set his goals as early as he can and devote all his energy and talent to getting there. With enough effort, he may achieve it. Or he may find something that is even more rewarding. But in the end, no matter what the outcome, he will know he has been alive.”

41. “I think it’s important to have a good hard failure when you’re young. I learned a lot out of that because it makes you kind of aware of what can happen to you.”

44. “Laughter is America’s most important export.”

48. “I resent the limitations of my own imagination.”

49. “Our greatest natural resource is the minds of our children.”

50. “Every child is born blessed with a vivid imagination.”

52. “Disneyland will never be completed. It will continue to grow as long as there is imagination left in the world.”

53. “A man should never neglect his family for business.”

54. “The important thing is the family. If you can keep the family together—and that’s the backbone of our whole business, catering to families—that’s what we hope to do.”

55. “We believed in our idea: a family park where parents and children could have fun—together.”

56. “Part of the Disney success is our ability to create a believable world of dreams that appeals to all age groups. The kind of entertainment we create is meant to appeal to every member of the family.”

More Walt Disney Quotes That You Will Love

57. “By nature, I’m an experimenter. To this day, I don’t believe in sequels. I can’t follow popular cycles. I have to move on to new things. So with the success of Mickey, I was determined to diversify.”

58. “I only hope that we never lose sight of one thing—that it was all started by a mouse.”

60. “Why do we have to grow up? I know more adults who have the children’s approach to life. They’re people who don’t give a hang of what the Jones’ do. You see them at Disneyland every time you go there. They are not afraid to be delighted with simple pleasures, and they have a degree of contentment with what life has brought—sometimes it isn’t much, either.”

Did These Walt Disney Quotes Give You the Courage to Pursue Your Dreams?

Achieving success is never an easy task. It isn’t easy now, and it certainly wasn’t any easier during Walt Disney’s time. But, he was not a quitter; Walt did what he could with what he had and strived to go beyond the limits set by society.

In one of his most famous lines, he says, “If you can dream it, you can do it.” This line, however short, perfectly describes Walt Disney’s attitude when it comes to facing the world. Life’s challenging as it is, but he tirelessly burned the midnight oil to achieve his goals.

He set his priorities straight and knew how to balance work and family life. No matter how hard things got, he never quit. Instead, he believed that magic would happen if we continued doing the things we loved.

This lesson is immensely relevant today. People—family, friends, mentors, and even strangers—have a lot of opinions regarding how we should live our lives. Like Walt Disney, pay them no mind; listen to your heart to ensure that you find happiness and contentment, whatever your future holds.

Do you aspire to be as successful as Walt Disney? Which quotes are your favorites? Share your thoughts below.