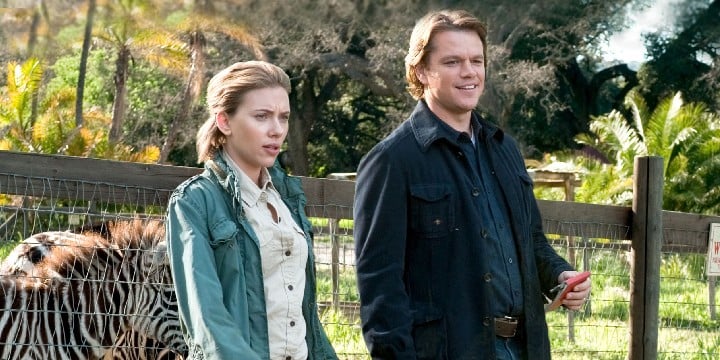 Get ready for some We Bought a Zoo quotes that will never leave your head!

Of all family matters, the death of a loved one might be one of the hardest to overcome. This is even more so when the one who’s passed away was the light of one’s home. In We Bought a Zoo, the Mee family struggles to move on from the death of Katherine, Benjamin’s wife and the mother of his children.

Benjamin Mee wanted to start a new life free from grief. So, they hunt for houses, and none seem to be perfect for them. That is until one of his children fell in love with a large old house.

Everything about the place was perfect for the Mee family. There’s just one twist: they must also buy the rundown zoo attached to it! A typical household would have given up on that choice, but not Benjamin and his kids.

He purchased the house and bought the zoo along with it! Though this might be a crazy act for most, it symbolizes his courage and willingness to move forward despite his pain. We’ve collected the best We Bought a Zoo quotes below, so don’t miss out so you can understand Mee’s decisions!

And make sure to read these Hot Fuzz quotes and Beverly Hills Cop quotes.

Best We Bought a Zoo Quotes

2. “You know, sometimes all you need is 20 seconds of insane courage. Just literally 20 seconds of just embarrassing bravery. And I promise you, something great will come of it.” – Benjamin Mee

3. “I’m a big fan of people being exactly who they are.” – Kelly Foster

Benjamin Mee: “I shall try to start over.”

7. Benjamin Mee: “This place is perfect! Why didn’t you mention it earlier?”

Benjamin Mee: “Complicated’s okay. What’s so complicated about this place?”

8. Kelly Foster: “We need somebody who can take charge of this place, or else we and all these animals are gone.”

Benjamin Mee: “So your question is—.”

Kelly Foster: “Why did you buy this place?”

Benjamin Mee: “Why not?”

Katherine Mee: “Why not?”

10. Benjamin Mee: “I want you to know, I think you’re incredibly pretty. Please don’t take offense if I don’t hit on you.”

Kelly Foster: “I’d be offended if you did.”

We Bought a Zoo Quotes That Are Simply Hilarious

13. “I would like to declare us all modern-day adventurers. And sponsors of animal greatness!” – Benjamin Mee

Rosie Mee: “You’re handsomer than the other dads. Lots of them don’t have hair. So that’s good.”

15. “I salute you and the great times we had together, and I quit!” – Benjamin Mee

16. Benjamin Mee: “You know what? ‘Whatever’ is the laziest word of the 20th century, alright? I’ve had it with whatever! I don’t want to hear it again in this century, ever again. ‘Whatever’ is over!”

Rosie Mee: “He says it all the time. He won’t have anything left to say in this century.”

Benjamin Mee: “I’m not letting you out of the car until I get a new word.”

17. Duncan Mee: “I said ‘human’ interaction. This is what happens when people have a you-know-what occur in their lives. They wake up one day, and they say, ‘I’m going to quit my job and try something completely different with my life.’ But then they wake up another day, and they say to themselves, ‘Thank God my older brother didn’t let me blow Dad’s inheritance by buying a broken-down zoo in the country nine miles from the nearest Target store.’”

Benjamin Mee: “Have you been drinking?”

Benjamin Mee: “Thanks for that.”

Benjamin Mee: “I’m the same way. Why don’t we just tell each other what we wish the other guy would say?”

Dylan Mee: “I’m sorry I brought you out to the sticks.”

Benjamin Mee: “I can live almost with the artwork. I mean, if Charles Manson needed a personal muralist, you’d be the guy.”

21. “What I’ve figured out is that when you love somebody that much—that hard, that long—you can never get away from them, no matter where you go. And that only comes once in a lifetime. Just can’t get a handle on it. I cannot let go.” – Benjamin Mee, Author

22. “If you’re doing something for the right reasons, nothing can stop you.” – Benjamin Mee, Author

23. “Well, talking to girls is easy. They’ll tell you everything. The secret to talking is listening.” – Benjamin Mee, Author

24. “Throwing yourself into worthwhile, fruitful hard work that you believe in—as much as you can handle and more—is a kind of luxury not everyone gets to experience.” – Benjamin Mee, Author

25. “You know, everybody here thinks you’re a dick. I don’t know what that means, but I don’t think that.” – Benjamin Mee, Author

What’s the First Step to Overcoming Any Bad Memory?

Many grow up believing that life is all colors and rainbows. However, know that grief, loss, or any pain will strike you at one point or another. These downsides are inescapable, as they are part of what makes us who we are.

Although that’s the case, life doesn’t give us these challenges to make us bend to its will. Instead, we face them to become stronger, learn how to move forward, and build the courage to keep going.

In the movie, Benjamin takes a leap of faith and buys a house with a zoo attached to it. It’s crazy to think about, but it’s the movie’s way of reminding us that sometimes, we just have to have the courage to do something out of character. By doing so, we allow more new opportunities to fill our lives.

We Bought a Zoo is an inspiring story about grief and accepting that life is not all good days. No matter how true that statement is, let’s all keep in mind that positive days are ahead if we just brave all the storms!