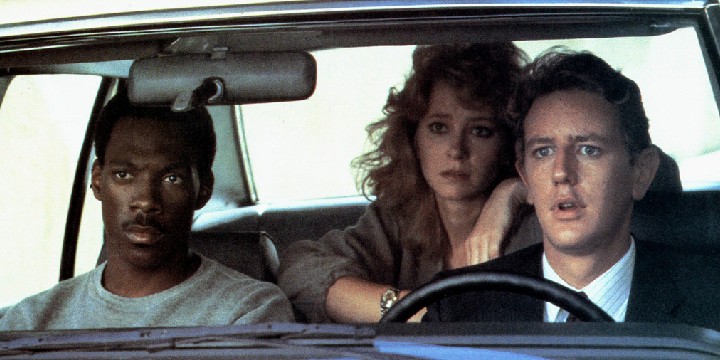 These Beverly Hills Cop quotes will have you thinking about what makes a good police officer and how they aid in maintaining peace in our communities.

If you’re a fan of Eddie Murphy, you’ll love his portrayal of this young, reckless Detroit detective in Beverly Hills Cop. In the movie, Axel Foley travels to Beverly Hills to solve the murder of his best friend.

Axel Foley is a talented officer, but there’s only one problem. He can’t follow orders, protocols, or the proper process. Axel just can’t do anything by the book!

This pisses off his superiors, especially when he goes to Beverly Hills. Though this is the case, Axel is still a skilled talent, and he has both the physical and mental toughness that’ll make him a significant weapon in one’s team.

To learn more about this comedy movie, read on. We have the best and funniest Beverly Hills Cop quotes!

And don’t forget to check out these Hot Fuzz quotes and We Bought a Zoo quotes.

1. “I never been in no cell that had a phone in it. Can I stay for a while? ‘Cause I ordered some pizza.” – Detective Axel Foley

Detective Axel Foley: “Disturbing the peace? I got thrown out of a window! What’s the fucking charge for getting pushed out of a moving car, huh? Jaywalking? This is bullshit!”

3. “All he asked me to do was drive you out of town. Now I’m gonna screw that up, too.” – Detective William Rosewood

4. Detective William Rosewood: “How did he know we were here?”

Sergeant Taggart: “I let you drive.”

5. “Before I go, I just want you two to know something, alright? The super cop story was working. Okay? It was working, and you guys just messed it up. Okay? I’m trying to figure you guys out, but I haven’t yet. But it’s cool. You fuck up a perfectly good lie.” – Detective Axel Foley

6. “Okay, everybody’s ready here. Okay. Nobody needs to take a nervous piss or nothing, right? We got this. Okay? Let’s mount up.” – Detective Axel Foley

7. “Can you put this in a good spot? ‘Cause all of this shit happened the last time I parked here.” – Detective Axel Foley

8. Detective William Rosewood: “You know what I keep thinking about? You know the end of Butch Cassidy? Redford and Newman are almost out of ammunition, and the whole Bolivian army is out in front of this little hut.”

Sergeant Taggart: “Billy, I’m gonna make you pay for this.”

9. “Yo, man, we gotta talk; seriously. Who do you think you are, Clint Eastwood? Dirty Rosewood?” – Detective Axel Foley

10. “You’re a good cop; you have great potential—but you don’t know everything.” – Inspector Douglas Todd

Beverly Hills Cop Quotes That’ll Get You Pumped Up

11. Jenny Summers: “I remember you used to drive that crappy blue Chevy Nova. What are you driving now?”

12. “Wake up! This is what we’ve always talked about! Look alive! You may never see it again! I don’t wanna step on your tongues, excuse me.” – Detective Axel Foley

14. “This is the cleanest and nicest police car I’ve ever been in, in my life. This thing’s nicer than my apartment.” – Detective Axel Foley

Jenny Summers: “Have you ever driven a Mercedes before?”

Detective Axel Foley: “No, but a car is a car. I drive my car every day.”

Detective Foster: “Yeah, and we’re not gonna fall for a banana in the tailpipe.”

Detective Axel Foley: “You’re not gonna fall for the banana in the tailpipe? It should be more natural, brother. It should flow out, like this, ‘Look, man, I ain’t fallin’ for no banana in my tailpipe!’ See, that’s more natural for us. You been hanging out with this dude too long.”

18. “Billy, you know, you don’t have to be embarrassed if your dick gets hard. Your dock is supposed to get hard. See? That’s the whole object of this. Taggart’s dick is hard, but he won’t let you know ’cause he’s the boss. Boss’ dick got to stay limp, right? See, I ain’t on duty, so my dick can be hard.” – Detective Axel Foley

19. “Tell Victor that Ramon—the fella he met about a week ago—tell him that Ramon went to the clinic today, and I found out that I have, um, herpes simplex 10, and I think Victor should go check himself out with his physician to make sure everything is fine before things start falling off on the man.” – Detective Axel Foley

20. Detective William Rosewood: “Wow. You know, it says here that by the time the average American is 50, he’s got 5 pounds of undigested red meat in his bowels.”

Sergeant Taggart: “Why are you telling me this? What makes you think I have any interest in that at all?”

21. “Don’t you think I realize what’s going on here, miss? Who do you think I am, huh? Don’t you think I know that if I was some hotshot from out of town that pulled inside here and you guys made a reservation mistake, I’d be the first one to get a room and I’d be upstairs relaxing right now? But I’m not some hotshot from out of town, I’m a small reporter from Rolling Stone magazine that’s in town to do an exclusive interview with Michael Jackson that’s gonna be picked up by every major magazine in the country. I was gonna call the article, ‘Michael Jackson Is Sitting On Top of the World,’ but now I think I might as well just call it ‘Michael Jackson Can Sit On Top of the World Just As Long As He Doesn’t Sit in the Beverly Palm Hotel ‘Cause There’s No Niggas Allowed in There!’” – Detective Axel Foley

Victor Maitland: “I think you should be more worried about what we’re going to do with you.”

Detective Axel Foley: “Yeah, Jenny, don’t worry about me. We got cocaine and coffee here. We’re gonna get wired and have a big party.”

Serge: “Foley is here to see her; he’s an old acquaintance.”

24. Sergeant John Taggart: “Why didn’t you identify yourself as a police officer when you were arrested?”

Detective Axel Foley: “’Cause I was mindin’ my own business. Hey, where the fuck do you guys get off on arresting somebody for getting thrown out of a window?”

Sergeant John Taggart: “We have six witnesses that say you broke in and started tearing up the place, then jumped out the window!”

Detective Axel Foley: “And you guys believe that? What the fuck are you, cops or doormen?”

Sergeant John Taggart: “We’re more likely to believe an important local businessman than a foul-mouthed jerk from out of town.”

25. Detective Axel Foley: “Did you see that shit? I can describe all of ‘em.”

Beverly Hills Cop #1: “Please move to the side of the car, and put your hands on the hood!”

Detective Axel Foley: “Why, what’s with you guys?”

Beverly Hills Cop #2: “You heard what he said, sir. Do it right now, please!”

Detective Axel Foley: “What kind of shit is this, man? Hold up, wait a second! You guys are arresting me for getting thrown out of a fucking window? I got thrown out of a window, man!”

Beverly Hills Cop #1: “Gun, partner! Sir, you are under arrest; you are to remain silent; anything you say can and will be against you in a court of law! You have a right to have an attorney present during questioning.”

26. “Todd is looking for you. He is really pissed. You know what he said? He said this is your worst fuck up ever. Personally, I don’t think that’s true.” – Jeffrey

27. Detective Axel Foley: “If something happens to her—.”

Victor Maitland: “Really? That would be a neat trick.”

Sergeant John Taggart: “You do that again, I’ll shoot you myself!”

29. Sergeant John Taggart: “Nah, that’s alright. You keep it as a souvenir.”

Detective Axel Foley: “I already have three of ’em in my bag.”

30. Inspector Todd: “You mind telling me where the fuck you come off going undercover without authorization from me? What the fuck’s this all about? You wanna play some fucking bullshit cowboy cop? Go do it in somebody else’s precinct!”

Detective Axel Foley: “Don’t you want to hear my side of the story?”

Inspector Douglas Todd: “What’s your fucking side of the story?”

How Would You Describe Axel Foley?

As a police officer, Axel Foley has quite the background. When he was younger, he stole cars with his friend, Mikey Tandino. Perhaps this background story of his is the reason behind his inability to go by the book while working as a cop.

Aside from that, we can also get a glimpse of his charming and cheeky side. Axel uses these qualities in his arsenal to help him solve the murder of his best friend. He’s also incredibly clever and observant, and he follows his gut.

These are all great qualities to have. However, Axel Foley lacks the control he needs to become a great police officer. So, in one of his superior’s quotes, Inspector Todd says, “You’re a good cop; you have great potential—but you don’t know everything.”

So, while it’s good to follow our instincts, we must never forget to think our actions through. Rules and protocols are there for a reason. And, as someone who implements the law, Foley should be the first and best example of that.

Let Axel Foley encourage you to follow your gut. But, at the same time, learn from his mistakes and recognize when it’s appropriate to stop, listen, and reflect. Keep this list in your bookmarks so you can quickly remember it when you need a good laugh or some advice!