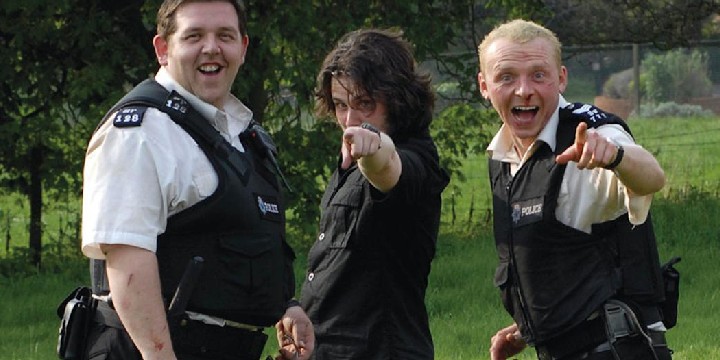 If you’re a Simon Pegg and Nick Frost fan, you’ll love these Hot Fuzz quotes we’ve compiled for you!

Hot Fuzz is a comedy and action movie that took the world by storm! It’s the second and most successful installment of the Three Flavors Cornetto, a trilogy of British comedy movies directed by Edgar Wright.

Here, we follow two police officers as they investigate the mysteries behind a series of gruesome deaths. This premise, in itself, is serious; after all, it deals with murder. However, what makes Hot Fuzz a comedic delight is Nicholas Angel and Danny Butterman’s partnership.

They couldn’t have been more different. Angel is a high-achieving Metropolitan Police officer who’s perceptive and highly intelligent. On the other hand, Butterman is a fan of buddy cop movies and is naive and lazy.

From this, we can already see how hilarious their interactions will be! So, read on to find the most famous lines from one of the best comedy movies ever.

And don’t forget to check out these We Bought a Zoo quotes and Beverly Hills Cop quotes.

Nicholas Angel: “Well, that’s as maybe, but the law’s the law, and they will have to go.”

Met Sergeant: “It can get awfully hairy out there. I’m surprised you weren’t snapped up sooner for a nice desk job; that’s what I did.”

Nicholas Angel: “I like to think my office is out on the street.”

Met Sergeant: “Indeed you do. Your arrest record is 400% higher than any other officer, which is high time such skills were put to better use. We’re making you sergeant.”

7. “You wanna be a big cop in a small town? Fuck off up the model village.” – Andy Cartwright

8. “Nobody tells me nothing!” – Sergeant Turner

9. Danny Butterman: “I can’t believe I shot someone.”

Nicholas Angel: “He’s a doctor; he can deal with it.”

10. Andy Cartwright: “Everybody and their mums are packing ’round here.”

Funny Hot Fuzz Quotes That Will Make You Laugh

12. “Have you ever fired your gun in the air and yelled, ‘Arrrghhh!’” – Danny Butterman

Nicholas Angel: “In the freezer.”

Nicholas Angel: “No, I didn’t say anything.”

14. Danny Butterman: “What about ‘Lethal Weapon?’”

16. “I may not be a man of God, but I know right, and I know wrong, and I have the good grace to know which is which.” – Nicholas Angel

17. “Police work is as much about preventing crime as it is about fighting crime. Most importantly, it is about procedural correctness in the execution of unquestionable moral authority.” – Nicholas Angel

18. Frank Butterman: “And he had one thing you haven’t got.”

20. “I know what you’re going to say, Nicholas, but the fact is you’ve been making us all look bad.” – Met Chief Inspector

Nicholas Angel: “It was the single most painful experience of my life.”

Danny Butterman: “What was the second most painful?”

22. “Maybe they were all accidents.” – Danny Butterman

23. Nicholas Angel: “Are there any questions?”

Danny Butterman: “Is it true that there’s a point on a man’s head where if you shoot it, it will blow up?”

24. “If we let you carry on running around town, you’ll continue to be exceptional, and we can’t have that. You’ll put us all out of a job.” – Met Chief Inspector

25. “Let us stop this mindless violence! My son, you may not be a man of God, but surely you are a man of peace.” – Rev. Philip Shooter

26. “I brought you into this world. I think it is rather fitting that I should take you out of it.” – Dr. Robin Hatcher

Nicholas Angel: “Because ‘accident’ implies there’s nobody to blame.”

28. “I’m sure if we bashed your head in, all sorts of secrets would come tumbling out.” – Simon Skinner

Nicholas Angel: “Well, I wouldn’t argue that it wasn’t a no-holds-barred, adrenaline-fueled thrill ride. But there is no way you can perpetrate that amount of carnage and mayhem and not incur a considerable amount of paperwork.”

30. “I’m simply suggesting that young Peter be given a second chance before he becomes just another crime statistic. I’m sure he’s going to learn a valuable lesson.” – Simon Skinner

How Would You Describe Nicholas Angel and Danny Butterman’s Partnership?

Hot Fuzz was released back in 2007. Even so, whenever we watch it or read its quotes, we’re still struck by its humor that’ll never get old. It has a certain kind of cleverness that will challenge its viewers to keep up and understand what’s happening.

Buried beneath all the laughs, Hot Fuzz makes us reflect on discrimination. When we truly understand what’s going on with the plot, we see that the village elders kill people whom they think do not fit the rural image they’re going for.

Even today, we can still see people who distort their faces when others talk about the town’s so-called outsiders. There always seems to be a divide, and Hot Fuzz showed us precisely that.

All this happened through Nicholas Angel and Danny Butterman’s partnership. Though their teamwork was simply due to work, we can’t contest how much they made us laugh. And, more so, we can’t deny the lessons we’ve learned from Hot Fuzz through them.

With that, we hope we were able to give you a more profound understanding of what goes on in society. Hot Fuzz might be a comedy through and through, but make sure you never forget about the morals it also contains.