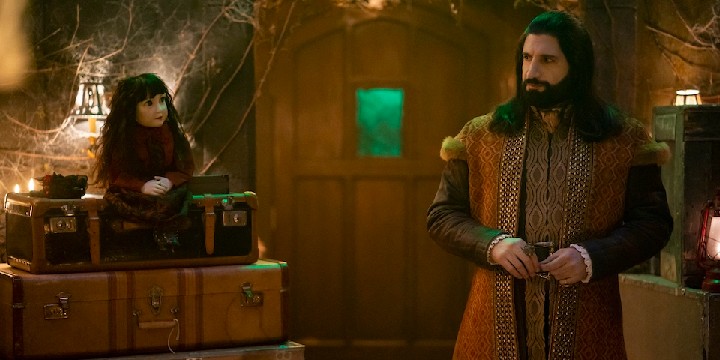 These What We Do in the Shadows quotes we’ve compiled for you will add to the fun and make your day more colorful!

What We Do in the Shadows is a mockumentary TV series released by FX. The story revolves around the lives of four vampires, Colin, Laszlo, Nadja, and Nandor. To add to the fun, the series focused on the vampires’ familiars, too!

It’s primarily set in Staten Island, New York City, where our favorite vampires get to interact with the modern world as well as other supernatural beings. This series was based on the original What We Do in the Shadows movie written and directed by Taika Waititi and Jemaine Clement.

And make sure to read these Vampire Diaries quotes and Modern Family quotes.

Best What We Do in the Shadows Quotes

2. “I wept the entire meal. Even though he tasted delicious.” – Nandor the Relentless

3. “You can’t hypnotize a subject that doesn’t want to do something that you want them to do.” – Nandor the Relentless

4. “After all that nonsense on Staten Island, I cut loose to Pennsylvania. Because it sounds like ‘Transylvania’, and we all know that sounds cool.” – Laszlo Cravensworth

5. “Vampires have huge respect for owls. One, they’re nocturnal. Two, they’re predators. And three, they don’t give a ‘hoot’ where they dump their scat.” – Laszlo Cravensworth

6. “If I find I’m in a situation where an idiot is complaining to me, you can either kill them or you can pretend to listen to them.” – Nandor the Relentless

9. “My friends have noticed mood swings, and unusual cravings—and sometimes I have this urge to turn my roommate to shreds—yeah, it’s become pretty clear to me that I’m becoming a vampire.” – Jenna

11. “How best to describe Nandor? I would say he’s blessedly unburdened with the complications of university education, but give him an ax and he’s second to none. Though you wouldn’t want him as your barrister. Don’t let him f*cking see this.” – Laszlo Cravensworth

16. “All secret meetings take place in the fancy room.” – Nandor the Relentless

17. “I was a very ferocious soldier in the Ottoman Empire. Which meant a lot of killing, a lot of pillaging. People would say, ‘Please don’t pillage me!’ And I would say, ‘No, I’m pillaging everyone, you included.’” – Nandor the Relentless

18. “Being a vampire’s familiar is like being a best friend, who, who’s also a slave.” – Guillermo de la Cruz

19. “I really hope that those guys don’t kill those police, because it will mean more police will come. Possibly even Christians, which is totally the last thing we need in this house.” – Viago von Dorna Schmarten Scheden Heimburg

What We Do in the Shadows Quotes That Are Worth Remembering

22. “One of the best ways to drain people’s energy is via the internet.” – Colin Robinson

23. “I don’t want these virgins. They are going to taste too sad.” – Nadja of Antipaxos

24. “Vampire sex is like pizza in that even when it’s bad it’s good.” – Nandor the Relentless

25. “I have recently rediscovered my love for topiary sculpture—the art of bush manipulation.” – Laszlo Cravensworth

What We Do in the Shadows Quotes to Keep You Entertained

27. Nandor the Relentless: “I would like us to get colorful dust that sparkles.”

Nandor the Relentless: “Yes, get me some glitter.”

Nandor the Relentless: “Well, I want to do something special for the immortal one’s arrival. I am going to sprinkle it on my face and on my body. Like Twilight.”

28. “We’ve been very careful not to stand out. Which is why we dress down.” – Laszlo Cravensworth

30. “Guillermo is my familiar, but sometimes he’s a little too familiar, you know what I mean? I mean, he’s always just there.” – Nandor the Relentless

Laszlo Cravensworth: “Laszlo doesn’t suck. And if he did, he certainly wouldn’t do it backward!”

32. “It seems that, uh, government workers are immune to hypnotism. It’s like their souls are dead or something.” – Nandor the Relentless

33. Nadja of Antipaxos: “Yes, they are near. The smell of beef and sulfur is overwhelming.”

34. “The problem with living with other vampires are the vampires I have chosen to stay with.” – Nadja of Antipaxos

35. “Do you remember that first time we made love? It was so passionate, I accidentally cut off your head.” – Nadja of Antipaxos

36. “We drank the blood of some people, but the people were on drugs, and now I’m a wizard.” – Nandor the Relentless

37. “When you are a vampire you become very, very sexy.” – Deacon Brucke

39. “Nandor is like a big turkey just walking around trying to control everything on the farm. And Laszlo is my big, crazy, wild bear and we love to chase each other around the house. We had a great time together.” – Nadja of Antipaxos

40. “These poor women. They take a lovely, handsome chap from the street, make him their husband, and then, in the blink of an eye, he becomes a big, lazy sack of sh*t. So sad.” – Nadja of Antipaxos

Who’s Your Favorite Vampire From What We Do in the Shadows?

Everything about What We Do in the Shadows is so unique and captivating. After all, this mockumentary gives viewers a glimpse into a vampire’s everyday struggles in the 21st century. Where else would you get something like that?

The plot pushed our favorite vampires into some outright terrible and terrifying situations. But, what made it so funny was how each vampire reacted to the circumstance presented to them. Their lines, demeanor, and personality in each scene are things you just won’t expect!

Additionally, the script for the series left the actors with a lot of room to improvise and show their creativity—and they did just that! Sometimes, a moment of silence or one awkward look is enough to elicit a stream of laughs from the audience. And, as a cult favorite, What We Do in the Shadows is a great show that took advantage of that.

With that, we hope we were able to bring some laughter and color to your day. Whenever you feel down, make sure you revisit this list of the greatest What We Do in the Shadows quotes!