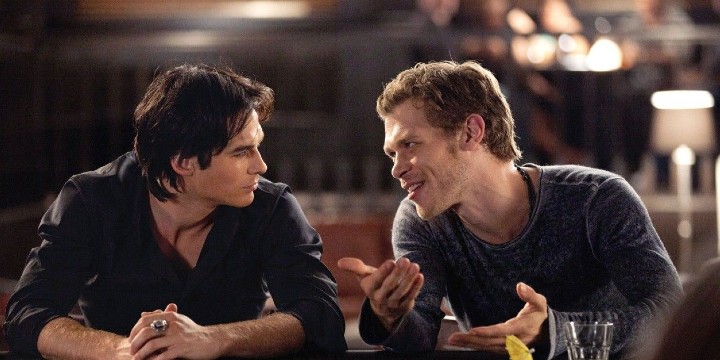 Damon Salvatore is a fictional character on the television show ‘The Vampire Diaries.’

Damon is a vampire and brother who is well-known for his good looks, sense of humor, and strength.

Over the course of the series, the bad vampire transformed into a good one, and that’s because of love.

Discover Damon Salvatore’s quest through his best quotes, and be prepared to learn valuable lessons that you can apply in real life. Brace yourselves and get ready to know more of him, enjoy!

And don’t forget to check out these Klaus Mikaelson quotes and The Vampire Diaries Quotes.

1. “If you’re going to be bad, be bad with a purpose or else you’re not worth forgiving.”

2. “I’ve been in love. It’s painful, pointless and overrated.”

3. “Our life is one, big proverbial coin toss.”

4. “I do not go behind people’s backs and torture them. I like my enemies to look me in the eye and see the depth of my rage.”

7. “Vampires can’t procreate. But we love to try.”

8. “It’s cool not growing old. I like being the eternal stud.”

10. “It’s not wrong to hustle hustlers. It’s like killing murderers, a public service.”

13. “I’ll make you scream my name so loud that you’ll forget yours.”

14. “You know what’s real? The way you felt for me. You once told me it was the most real thing you ever felt in your life.”

19. “Well, your life was pathetic; your afterlife doesn’t have to be.”

21. “I wanted to feel something again. And when I decided to come back home, it all came rushing back, just like I hoped it would.”

23. “If you’re gonna be maudlin, I’m gonna kill you myself. Just to put me out of your misery.”

25. “We both know the closest you’ll ever get to humanity is when you rip it open and feed on it.”

26. “Don’t mistake the fact that we haven’t set you on fire in your sleep for trust.”

27. “I will shove this ring so far up your ass, you’ll really have something to choke on.”

28. “See, I don’t mind being the bad guy. Because somebody has to fill that role and get things done. You do bad things for no reason. You do them to be a dick.”

29. “You know what would make me happy? That whatever you felt for me was actually real!”

31. “Life sucks either way, Jeremy. At least if you’re a vampire, you don’t have to feel bad about it if you don’t want to.”

32. “You want what everybody wants—you want a love that consumes you. You want passion and adventure, and even a little danger.”

33. “When people see good they expect good and I don’t want to live up to their expectation.”

35. “The best way to not get your heart broken is to pretend that you don’t have one.”

36. “What happens if the one who breaks your heart is the only one who can fix it?”

37. “I promised you an eternity of misery, so I’m just keeping my word.”

38. “Everything changes tomorrow. It’ll be all unicorns and rainbows.”

42 “Today isn’t the worst day of your life. There will be people day in and day out, like they’re afraid to leave you alone. The worst day? It’s gonna be next week, when there’s nothing but quiet.”

44. “I’m not upset. Upset is an emotion specific to those who care.”

Damon Salvatore Quotes That Will Put A Smile On Your Face

47. “Am I wearing my ‘I blew up the council’ t-shirt? Why does everybody keep asking me that?”

48. “Put the damn crossbow down, Pocahontas.”

50. “Looking at the stars, listening to the Universe laughing at me.”

52. “I don’t do the big brother thing very well, so I don’t have any milk and cookies to offer you.”

53. “Well, the vervain keeps me out of her head. Maybe that’s not my target. Believe it or not, Stefan, some girls don’t need my persuasion. Some girls just can’t resist my good looks, my style, my charm—and my unflinching ability to listen to Taylor Swift.”

55. “Have I told you lately how much I appreciate you not being the dumbest brother on Earth?”

56. “Dear Diary, a chipmunk asked me my name today. I told him it was Joe. That lie will haunt me, forever.”

57. “And I can go back to sulking, Elena-longing and Forehead-brooding—this is fun. I like this.”

Damon Salvatore Quotes That Will Make You Fall In Love

58. “I will love you until I take my last breath on this earth.”

59. “You know you were dreaming about me, it explains the drool.”

62. “I’m in love with a woman I can never have. The point is, I’m in love with her and it’s driving me crazy. I’m not in control. I have to stay together to protect her and she wants me to be the better man. Which means I can’t be who I am.”

64. “No matter how much I missed you or how much pain I was in, I never would have erased everything we ever had. Even if I was drowning in grief, I’d rather hang on to every moment that I ever held you, or every laugh I ever heard, every shred of happiness that we ever had. I would rather spend every moment in agony than erase the memory of you.”

65. “True love will triumph in the end—which may or may not be a lie, but if it is a lie, then it’s the most beautiful lie we have.”

67. “Because in the end, when you lose somebody, every candle, every prayer is not going to make up for the fact that the only thing you have left is a hole in your life where that somebody that you cared about used to be.”

69. “I could kiss you right now, you beautiful moron.”

70. “When I kill somebody, they are supposed to stay dead!”

71. “I’d rather die right now than spend my last final years remembering how good I had it and how happy I was, because that’s who I am, Elena, and I’m not gonna change. And there’s no apology in the world that encompasses all the reasons that I’m wrong for you.”

73. “Your search for life’s purpose is as obvious as it is tragic.”

74. “Sorry to spoil your seven minutes in heaven. We have a problem.”

75. “Apparently, my choices have been a little controversial lately.”

82. “You know, I really liked you a whole lot better when you hated everybody.”

86. “You spent the last century and a half being the poster child for Prozac. Now you want me to believe this new you has nothing to do with human blood.”

87. “I do believe in killing the messenger. Know why? Because it sends a message.”

92. “You confuse me for someone with remorse.”

93. “Huh. Looks like mom raised her man crush from the dead.”

94. “You better start talking or I will kill you in your sleep.”

96. “Whatever desire you have to save me, I kind of need that right now.”

97. “If you’re setting me up in any way, I will rip your heart out and shove it down your throat. Something I’m very good at.”

98. “Because I live in the real world where vampires burn in the sun.”

99. “You’re not gonna be doing much of anything if you don’t have your strength. There’s nothing wrong with partaking in a healthy diet of human blood from a blood bank. You’re not actually killing anyone.”

What Impact Do These Damon Salvatore Quotes Have On Your Life?

The Vampire Diaries was the most-watched show, with millions of viewers tuning in. Despite the fact that the characters are teenagers, there is a great deal to be learned from them and their experiences.

The plot revolves around vampires, but the main theme is love. It tells the story of a vampire teen who falls in love with a girl whose parents were killed in a car accident. The two fall in love, but when the vampire’s older brother arrives in town, he falls in love with her as well.

This show taught us how to deal with fear, the essence of humanity, the beauty of second chances, and most importantly, how to love. We should accept each other’s flaws and differences, and love unconditionally.

Is Damon Salvatore your favorite character in the series? What did you learn from his quotes? Please share your thoughts in the comments section below.