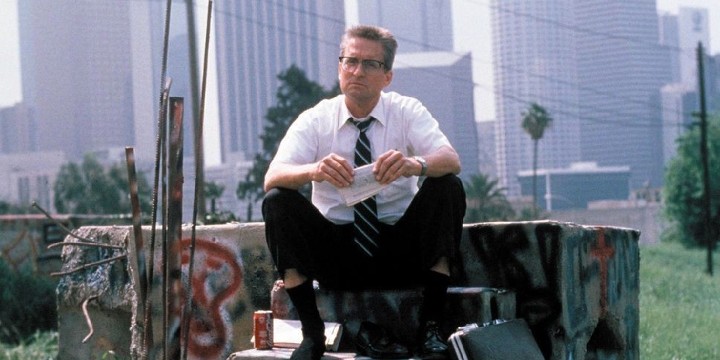 Let these Falling Down quotes help you see how the world works from a new point of view!

Falling Down follows the story of a middle-aged man named William Foster as he struggles to make sense of his life after losing his job, home, and family to a series of unexpected events.

The movie is a compelling examination of the highs and lows in life, which show us what happens when people are pushed beyond their limits.

William Foster was once a mild-mannered man, but when he lost everything that mattered to him, he was pushed to his breaking point. Once he’s at this point, he can’t go back.

That’s why he started taking matters into his own hands by lashing out at the people around him who had wronged him in some way.

So, if you want to learn more about the movie’s plot, read this list of quotes! We’re positive it’ll give you a glimpse of how society influences people.

And make sure to check out these True Romance quotes.

1. “I never liked you. You know why? You don’t curse. I don’t trust a man who doesn’t curse. Not a ‘f*ck’ or a ‘shit’ in all these years. Real men curse.” – Captain William Yardley

2. “I lost my job. Actually, I didn’t lose it. It lost me. I’m overeducated, underskilled, maybe it’s the other way around. I forget, but I’m obsolete. I’m not economically viable. I can’t even support my own kid.” – William Foster

3. “You have a choice. I can kill you. Or you can kill me, and my daughter will get the insurance.” – William Foster

5. “Hey. Why are you putting barbed wire on that fence? Is this how you rich people amuse yourselves? You put barbed wire on the fence so innocent people like me can hurt themselves lurking in?” – William Foster

6. William Foster: “I’ve passed the point of no return, Beth. Do you know when that is? That’s the point in a journey where it’s longer to go back to the beginning than it is to continue to the end. It’s like—do you remember when those astronauts got in trouble? They were going to the moon, and something went wrong. I don’t know, somebody screwed up, and they had to get them back to Earth. But they had passed the point of no return. So they had to go all the way around the moon to get back, and they were out of contact for hours. Everybody waited, breathlessly, to see if a bunch of dead guys in a can would pop out the other side. Well, that’s me. I’m on the other side of the moon now—out of contact, and everybody is going to have to wait ’till I pop out.”

Elizabeth Trevino: “The police are here.”

William Foster: “Did you know, Beth, that in some South American countries, it’s still legal to kill your wife if she insults you?”

William Foster: “We are not the same. I’m an American, and you’re a sick *sshole.”

Nick: “Just what kind of vigilante are you?”

William Foster: “I am not a vigilante. I am just trying to get home to my little girl’s birthday party, and if everyone will just stay out of my way, nobody will get hurt.”

William Foster: “I am just disagreeing with you! In America, we have the freedom of speech, the right to disagree!”

Nick: “F*ck you and your freedom.”

9. Sergeant Martin Prendergast: “Something about my wife. Maybe I never mentioned it.”

Sergeant Martin Prendergast: “I love her.”

Gang Member #1: “I’ll read it for you. It says this is f*cking private property. No f*cking trespassing. This means f*cking you.”

William Foster: “It says all that?”

William Foster: “Well, maybe if you wrote it in f*cking English, I could f*cking understand it.”

11. “See, this is what I’m talking about. Turn around, look at that. You see what I mean? It’s plump, it’s juicy, it’s three inches thick. Now, look at this sorry, miserable, squashed thing. Can anybody tell me what’s wrong with this picture?” – William Foster

William Foster: “You think I’m a thief? Oh, you see, I’m not the thief. I’m not the one charging 85 cents for a stinking soda! You’re the thief! I’m just standing up for my rights as a consumer.”

13. Sergeant Martin Prendergast: “What were you going to do?”

Sergeant Martin Prendergast: “Oh, guys, like you always say you don’t know what you’re going to do until you do it. I think you know exactly what you were going to do, you would’ve killed your wife and child.”

Sergeant Martin Prendergast: “Yeah. And then you knew it would be too late to turn back, it would be real easy to turn the gun around on yourself.”

Nick: “Gravity? What the f*ck does that mean?”

Sergeant Martin Prendergast: “Let’s not. Let’s call it a day.”

William Foster: “What were you, a drummer boy? You must’ve been 10 years old!”

Seedy Guy in the Park: “I meant the Gulf, I meant to say the Gulf. Jesus! Come on, all I’m asking for is a little change. I haven’t eaten in three days.”

18. “You want freedom? I’ll give you f*cking freedom. You’re going to jail, f*ggot. How’s that for freedom? Freedom to get f*cked up the *ss by some big buck n*gger. Give me your other hand! He’s gonna be right behind you. Just like this. You’re gonna like that, won’t you, you f*ggot f*ck? Think about it.” – Nick

19. Man at the Phone Booth: “Excuse me. Hey, excuse me. I don’t know if you have noticed it or not, but there are other people waiting to use the phone here.”

William Foster: “There are?”

Man at the Phone Booth: “Yeah.”

William Foster: “There’s other people who want to use the phone?”

Man at the Phone Booth: “That’s right, you selfish *sshole.”

William Foster: “Well, that’s too bad. Because you know what? I think it’s out of order.”

Falling Down Quotes to Help You Understand How Society Works

Frank: “Nobody said you could play through! Get off my hole!”

Frank: “He’s not even a member. Look at the way he’s dressed, for Christ’s sake! Would you get off my golf course?”

Frank: “Go back the way you came!”

Jim: “Frank, Frank, listen, I don’t like the looks of this guy. Leave him alone, will you?”

Frank: “Listen, what am I paying my f*cking dues for? This is my golf course! If I want to play here, I will play here, you understand? If he gets hit with my Titleist, that’s his f*cking problem!”

21. Construction Worker: “Where do you think you’re going? You can’t come this way.”

William Foster: “What are you doing to the street?”

Construction Worker: “We’re fixing it! What the hell does it look like?”

William Foster: “Two days ago, it was fine. You’re telling me the street fell apart in two days?”

Construction Worker: “Well, I guess so.”

Construction Worker: “What are you, nuts?”

William Foster: “No, I know how it works. If you don’t spend the money you have projected this year, they won’t give you the same amount next year. Now I want you to admit there’s nothing wrong with the street!”

William Foster: “I was just looking for some hiking boots.”

Nick: “Let’s see what we got. These here are the top of the line. Scientifically engineered and all that crap. Guaranteed by some Sierra Club *sshole not to hurt a chipmunk if you step on it! Personally, I think they’re for p*ssies and f*ggots! Now, these are Vietnam jungle boots. Cost you half as much, last you twice as long, and are great for stomping. Queers! ‘Course, when you’re done, you have to clean out the waffle with a stick, but what the hell, you can’t have everything, right? Am I right or wrong?”

23. William Foster: “Why am I calling you by your first names? I don’t even know who you are. I still call my boss ‘Mister,’ I worked for him for seven and a half years, but I walk in here, all of a sudden, total stranger; I’m calling you Rick and Sheila like we’re in some kind of AA meeting. I don’t want to be your buddy, Rick. I just want a little breakfast.”

Sheila Folsom: “Well, you can call me Miss Folsom if you want to.”

William Foster: “How’d that happen? I did everything they told me to. Did you know I build missiles? I helped to protect America. You should be rewarded for that. Instead, they give it to the plastic surgeons, you know, they lied to me.”

Sergeant Martin Prendergast: “Is that what this is about? You’re angry because you got lied to? Is that why my chicken dinner is drying out in the oven? Hey, they lie to everyone. They lie to the fish. But that doesn’t give you any special right to do what you did today. The only thing that makes you special is that little girl.”

25. William Foster: “You’re Korean? Do you have any idea how much money my country has given your country?”

Did William Foster’s Story Influence How You View the World Around You?

Falling Down focuses on the story of William Foster, a man who has lost everything that matters to him. As he moved forward with his life, all he saw was the unfairness of the world and society.

The movie might be full of action and violence, but it has a message that runs deeper. It actually touches on deeper societal issues like discrimination, crime, and class.

We all have our own set of expectations, including those we hold for ourselves. However, because we all strive to be accepted by society and meet its expectations, we often lose sight of who we are and what we want.

No matter how hostile the world is, we must remain positive. With an optimistic mindset, we will save ourselves from chains that hold the rest of society back. We must never conform; instead, we must break free from the status quo.

With that, we hope that this collection of quotes was able to enlighten you about the power society can have over one’s life. It isn’t wrong to want to belong and be accepted, but make sure you don’t change yourself just for it!