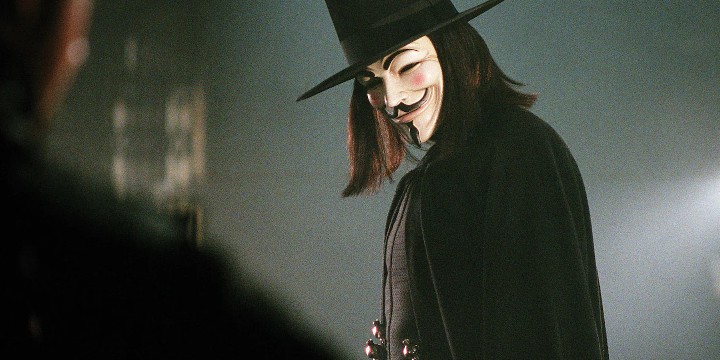 There’s no contesting that life’s unfair, so to better understand how society and humanity work, read this list of the best V for Vendetta quotes!

As its title implies, V for Vendetta is a movie that revolves around one’s need for revenge and justice. It’s set in a dystopian future where leaders of a corrupt English regime called the Norsefire party oppress its people.

The wrath of war brought pain to the people, and the regime’s mistreatment further amplified it. But, V was idealistic and dared to go against the government. He might have been considered a rebel or a traitor, but he’s really a rogue hero who championed human rights.

V for Vendetta is indeed a movie packed full of lessons that are deeper than you think. So, to know more about it, read our complete list below!

And don’t forget to check out these Big Trouble in Little China quotes and Days of Thunder quotes.

1. “You wear a mask for so long, you forget who you were beneath it.” – Gordon Dietrich

4. “We are told to remember the idea, not the man because a man can fail. He can be caught, he can be killed, and forgotten, but 400 years later, an idea can still change the world.” – Evey Hammond

5. “It’s a basic principle of the universe that every action causes an equal and opposite reaction.” – V

7. “A building is a symbol, as is the act of destroying it. Symbols are given power by people. Alone, a symbol is meaningless, but with enough people, blowing up a building can change the world.” – V

Evey Hammond: “Now? On the eve of your revolution?”

9. “Then you have no fear anymore. You’re completely free.” – Security Guard

10. “Your own father said that artists use lies to tell the truth. Yes, I created a lie. But because you believed it, you found something true about yourself.” – V

11. “There are no coincidences, Delia—only the illusion of coincidence.” – V

Evey Hammond: “He was Edmond Dantés, and he was my father—and my mother, my brother, my friend. He was you—and me. He was all of us.”

13. “But what I hope most of all is that you understand what I mean when I tell you that, even though I do not know you, and even though I may never meet you, laugh with you, cry with you, or kiss you, I love you. With all my heart, I love you. Valerie.” – Evey Hammond

14. V: “I told you, only truth. For 20 years, I sought only this day. Nothing else existed—until I saw you. Then everything changed. I fell in love with you Evey. And to think I no longer believed I could.”

Evey Hammond: “But I don’t want you to die.”

V: “That’s the most beautiful thing you could have ever given me.”

16. “No one will ever forget that night and what it meant for this country. But I will never forget the man and what he meant to me.” – Evey Hammond

V for Vendetta Quotes to Elevate Your Mind

17. “The only verdict is vengeance; a vendetta, held as a votive, not in vain, for the value and veracity of such shall one day vindicate the vigilant and the virtuous.” – V

18. Evey Hammond: “My father was a writer. You would’ve liked him. He used to say that artists use lies to tell the truth, while politicians use them to cover the truth up.”

20. “I’ve witnessed firsthand the power of ideas. I’ve seen people kill in the name of them, and die defending them. But you cannot kiss an idea, cannot touch it, or hold it. Ideas do not bleed, they do not feel pain, they do not love. And it is not an idea that I miss; it is a man—man that made me remember the fifth of November. A man that I will never forget.” – Evey Hammond

V for Vendetta Quotes for Those Seeking Revenge

V: “The only thing that you and I have in common, Mr. Creedy, is we’re both about to die.”

Peter Creedy: “How do you imagine that’s gonna happen?”

V: “With my hands around your neck.”

V: “By the power of truth, I, while living, have conquered the universe.”

Evey Hammond: “That’s about trying to cheat the devil, isn’t it?”

V: “Who? Who is but the form following the function of what, and what I am is a man in a mask.”

Evey Hammond: “Well I can see that.”

V: “Of course, you can. I’m not questioning your powers of observation; I’m merely remarking upon the paradox of asking a masked man who he is.”

Evey Hammond: “Yeah. But it made me feel sorry for Mercedes.”

Evey Hammond: “Because he cared more about revenge than he did about her.”

More V for Vendetta Quotes for a Better Sense of Justice

27. “The truth is, there is something terribly wrong with this country, isn’t there? Cruelty and injustice, intolerance and oppression. And where once you had the freedom to object, to think and speak as you saw fit, you now have censors and systems of surveillance coercing your conformity and soliciting your submission.” – V

28. “One thing is true of all governments: their most reliable records are tax records.” – Eric Finch

29. Dominic Stone: “What do you think will happen?”

Eric Finch: “What usually happens when people without guns stand up to people with guns.”

Gordon Deitrich: “Only the things that matter.”

How Can You Break Free From Society’s Self-Imposed Rules?

It’s hard to live life being controlled and, in worst-case scenarios, oppressed by others. This is a theme that can be found throughout the movie. Just through this, we can say that V for Vendetta has a highly political plot that zooms in on different aspects of life and society.

Here, V fought hard against oppression through the power of ideas. Revolutions are sometimes like that; they are started and powered using one’s thoughts. Without them and a strong will, no revolution will ever take place and succeed.

So, whenever you feel like others are controlling you into doing what you don’t like, start with the powerful thought of breaking free from society’s chains. If you believe in yourself and your abilities, then surely, there’s nothing you can’t conquer. Of course, note that putting your thoughts into action is also essential.

The next time you watch V for Vendetta, remember the powerful and life-changing lessons it offers. It might be a political thriller, but it still contains meaningful pieces of wisdom you can apply in all aspects of life.