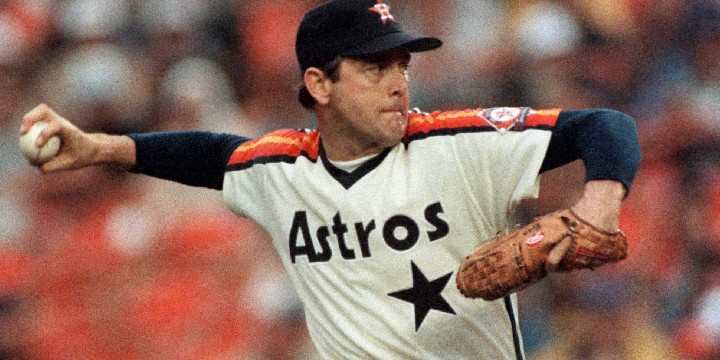 Get ready to cover all bases of life and sports through this list of the best Nolan Ryan quotes!

All baseball fans, no doubt, know about Nolan Ryan, also nicknamed The Ryan Express. He’s a former American MLB pitcher famous for his fastest pitch that reached 100.9 miles per hour! His inhuman skills even earned him a spot in the Guinness Book of World Records.

Nolan Ryan’s life and baseball went hand in hand for many years. In fact, he holds the spot for the MLB player with the most seasons played. Indeed, we can never speak about him without talking about baseball because this sport shaped his and his family’s life.

So, let’s dive into the collection below that will show you the impact that baseball had on Nolan Ryan’s life. Scroll through to the end and find your favorite quotes.

And make sure to read these baseball quotes and Joe DiMaggio quotes.

1. “One of the beautiful things about baseball is that every once in a while, you come into a situation where you want to, and where you have to, reach down and prove something.”

3. “And I’m a believer that you take a negative and turn it into a positive.”

4. “Everyone has limits. You just have to learn what your own limits are and deal with them accordingly.”

5. “Maintaining concentration depends on what I call tunnel vision; nothing else in the world exists but the catcher’s target, the hitter, and my perfect delivery.”

6. “I grew up with the thought that I wanted to treat people the way I’d like to be treated, and I think if you do that, it’s pretty hard to go wrong.”

7. “Only by being open to change will you have a true opportunity to get the most from your talent.”

8. “I’ve got a different perception now, and it’s really enjoyable to be at this point in your life and be able to watch this.”

13. “It helps if the hitter thinks you’re a little crazy.”

14. “I guess that’s what Little League is all about—trying.”

Nolan Ryan Quotes That’ll Keep You on Your Toes

15. “Safety is a big part of preparing my ranch for the busy times ahead, and preventing injuries is a good way to have a truly successful season.”

16. “You’ve got to realize that in any competition, there is always a winner and loser. When it turns out that you’re the loser on a given day, you can be a graceful loser, but it doesn’t mean that you’re a loser in the sense that you’re willing to accept losses readily. Concede that on that day you weren’t the best and that you were beaten in competition. But that should make you more dedicated and hard working. It’s wrong to accept defeat as a loser. Be graceful about losing, but don’t accept it.”

17. “And that’s what makes this a great game, is the support and the commitment that the fans give the game.”

18. “My ability to throw a baseball was a gift. It was a God-given gift. And I am truly appreciative of that gift.”

19. “I always thought that there was going to be life after baseball, and so I designed that in my life, I would have other interests after baseball that I would be able to step into. And I didn’t realize the grip that baseball had on me and on my family.”

20. “Put the right pitching mechanics together with good health, and there’s nothing surprising about lasting a long time.”

21. “Baseball life is a tough life on the family.”

22. “We do it both as a business and out of love of the game of baseball.”

23. “A successful pitcher keeps the leadoff hitter from reaching first base and puts the first pitch over for a strike—the two most important rules of pitching.”

24. “I can’t think of anything more humiliating than losing a ballgame to a guy who steals home on you. It happened to me one time against Kansas City. I had a 2-2 count on the hitter, and Amos Otis broke from third. The pitch was a ball, and he slid in safe. I felt like a nickel.”

25. “When I got traded to the California Angels, I really wasn’t that excited about going to the Angels because it meant changing leagues and also a whole new set of teammates. But shortly after I got there, I realized that it was one of the best things that ever happened to me.”

More Nolan Ryan Quotes That’ll Give Insights Into His Personality

26. “I am going to spend my time today just thanking the people that played a role in my career because I truly do believe that I was blessed by a lot of people that paths crossed mine as I went down the road in my career.”

27. “And when I retired, trust me, not only did Nolan Ryan, but the entire Ryan family had withdrawals from baseball. And it was tough.”

28. “I can honestly say it took two full years for me to get over the fact that I was no longer a baseball player.”

29. “For my children, they spent 15 to 20 years of their life in baseball. And Ruth and I spent so many years of our married life that that was our life. We knew nothing else.”

30. “I had the pleasure, as Robin said, to live a childhood dream as many young Americans and Puerto Rican children live that play youth baseball. And I feel honored and very thankful for that opportunity.”

Did the Quotes Above Show You Just How Impactful Baseball Was in Nolan Ryan’s Life?

We all have passions, dreams, and things we like doing. Sometimes, we’re lucky enough to pursue the things we love to do. But, sadly, some people take it for granted and don’t live out their lives purposefully.

Nolan Ryan was the opposite of this. He lived and breathed baseball; even his family was involved and deeply dedicated! Nolan Ryan was grateful, and he acknowledged that he had to work hard for success and to keep living the life he enjoyed.

Maybe this attitude of his was what made him stick to the MLB for 27 seasons. More than that, he had a very successful and fulfilling career that will forever be remembered.

This proves that talent and passion are not enough to remain at the top. We must remember that dedication, grit, and effort are necessary to keep ourselves in tip-top shape. So, take Nolan Ryan’s quotes as your inspiration to work for your dreams in life!

Are you also amazed by Nolan Ryan’s stats? Which quote is your favorite? Comment below.