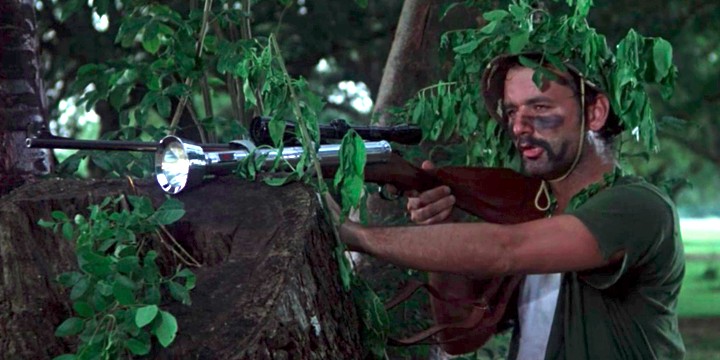 Get to know your favorite greenskeeper in Caddyshack through this list of the best Carl Spackler quotes!

There are many ways to describe Carl Spackler. Some may see him as a loner who talks to himself or an eccentric guy who takes his job to get rid of the gophers to the extremes. But, Carl is also a dreamer who aspires to have a Cinderella story when it comes to golf.

Because of this, Carl Spackler is able to hold on to hope, no matter how bleak it might seem. He’s wholly interested and passionate about golf, which makes him dedicated to his job as someone who maintains the golf course.

To know more about him and the movie, check out this list of quotes. We’re sure you’ll not regret reading Carl Spackler’s best lines!

And don’t miss out these Caddyshack quotes and Groundhog Day quotes.

1. “I’d keep playing. I don’t think the heavy stuff’s going to come down for quite a while.”

2. “What an incredible Cinderella story. This unknown comes out of nowhere to lead the pack. At Augusta, he’s on his final hole. He’s about 455 yards away. He’s going to hit about a two-iron, I think. Well, he got out of that. The crowd is standing on its feet, here at Augusta. The normally reserved Augusta crowd is going wild. For this young Cinderella who’s come out of nowhere, he’s got about 350 yards left. He’s going to hit about a five-iron, l expect. Don’t you think? He’s got a beautiful backswing. That’s—oh! He got out of that one! He’s got to be pleased with that. The crowd is just on its feet here. He’s a Cinderella boy. Tears in his eyes, I guess, as he lines up this last shot. He’s got about 195 yards left, and he’s gonna—looks like he’s got about an eight-iron. This crowd has gone deadly silent. Cinderella story. Out of nowhere. A former greenskeeper is now about to become the Master’s champion. It looks like a miraculous—it’s in the hole! It’s in the hole!”

3. Sandy McFiddish: “I want you to kill every gopher on the course!”

Carl Spackler: “Check me if I’m wrong, Sandy, but if I kill all the golfers, they’re gonna lock me up and throw away the key—.”

Carl Spackler: “We can do that. We don’t even have to have a reason.”

4. “Licensed to kill gophers by the government of the United Nations. A man, free to kill gophers at will. To kill, you must know your enemy, and in this case, my enemy is a varmint. And a varmint will never quit—ever. They’re like the Viet Cong—Varmint Cong. So you have to fall back on superior intelligence and superior firepower. And that’s all she wrote.”

5. “If he bothers you, I’ll take care of him. What you’ve got to do is cut the hamstring on the back of his leg right at the bottom. He’ll never play golf again because his weight displacement goes back, all his weight is on his right foot, and he’ll push everything off to the right. He’ll never come through on anything. He’ll quit the game.”

Carl Spackler Quotes for Avid Fans of the Movie

6. “In the immortal words of Jean-Paul Sartre, ‘Au revoir, gopher.’”

7. “I have to laugh because I’ve outsmarted even myself. My enemy, my foe, is an animal. In order to conquer the animal, I have to learn to think like an animal. And, whenever possible, to look like one. I’ve gotta get inside this guy’s pelt and crawl around for a few days.”

8. Carl Spackler: “So I jump ship in Hong Kong, and I make my way over to Tibet, and I get on as a looper at a course over in the Himalayas.”

Carl Spackler: “A looper, you know, a caddy, a looper, a jock. So, I tell them I’m a pro jock, and who do you think they give me? The Dalai Lama, himself. Twelfth son of the Lama. The flowing robes, the grace, bald, striking. So, I’m on the first tee with him. I give him the driver. He hauls off and whacks one—big hitter, the Lama—long, into a 10,000-foot crevasse, right at the base of this glacier. Do you know what the Lama says? Gunga galunga, gunga, gunga-lagunga. So we finish the 18th, and he’s gonna stiff me. And I say, ‘Hey, Lama, hey, how about a little something, you know, for the effort, you know.’ And he says, ‘Oh, uh, there won’t be any money, but when you die, on your deathbed, you will receive total consciousness.’ So I got that goin’ for me, which is nice.”

9. Sandy McFiddish: “Carl, damn your eyes. I told you, today is the day we change the holes. Now, do it, and no more slacking off.”

Carl Spackler: “I’ll slack you off, you fuzzy little foreigner.”

10. “Well, I have been pushed. I think it’s about time somebody teach these varmints a little lesson about morality and what it’s like to be a decent, upstanding member of society!”

16. “I got to get into this dude’s pelt and crawl around for a few days. Who’s the gopher’s ally? His friends. The harmless squirrel and the friendly rabbit.”

17. “Hello? Anybody home? Hello, Mr. Gopher! It’s me, Mr. Squirrel. Just a harmless squirrel. Not a plastic explosive or anything. Nothing to be worried about. I’m just here to make your last hours on earth as peaceful as possible. Don’t mind this. This is the doctor’s orders. You don’t mind if I just pop in there for a few laughs?”

18. “You’re a disgrace, and you’re varmints. You’re the lowest members of the food chain, and you’ll probably be replaced by the rat.”

19. “Oh, Mrs. Crane, I’m looking at you. You wore green so you could hide. I don’t blame you—you’re a tramp! Oh! That was right where you wanted it! Oh, Mrs. Crane, you’re a little monkey woman, you know that? You’re a little monkey woman. You’re lean, and you’re mean, and you’re not too far between either, I bet, are ya? Would you like to wrap your spikes around my head?”

20. “This is a hybrid. This is a cross, ah, of Bluegrass, Kentucky Bluegrass, Featherbed Bent, and Northern California Sensemilia. The amazing stuff about this is, that you can play 36 holes on it in the afternoon, take it home, and just get stoned to the bejeezus-belt that night on this stuff.”

Do You Think Caddyshack Would Have the Impact It Had Without Carl Spackler?

Many might not know it, but Caddyshack was initially written as a coming-of-age movie. The original plan was about a love triangle Danny Noonan would have with a fellow caddy and an Irish club employee.

However, slowly, the creators of Caddyshack saw that there was much more potential in the comedy side of things. So, one by one, actors started getting more air time, and eventually, Carl Spackler became one of the show’s irreplaceable characters.

With Bill Murray playing Spackler, everyone’s sure they’re in for a treat from the very first scene! In fact, Spackler’s famous lines about the Dalai Lama were mostly improvised by Murray, and they have since become one of Caddyshack’s most iconic scenes.

With this, there’s no doubt in our minds that Spackler is one of the characters that brought Caddyshack to life. His role as a greenskeeper is straightforward and simple, but his presence in the movie is anything but.

Read these Carl Spackler quotes again whenever you need an energy boost. We hope we were able to show you just how much of an impact this one character has on this timeless and classic sports comedy movie!