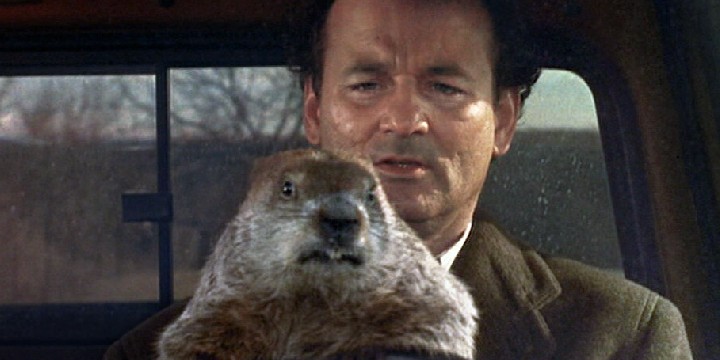 Be ready for some profound lessons on never taking anything for granted by reading these Groundhog Day quotes we’ve gathered.

Have you ever wondered what it would feel like if you were to relive the most painful day of your life? In Groundhog Day, it was like Phil was in a time loop—one he couldn’t get out of. He was in Punxsutawney to cover the annual Groundhog Day festivities, but it wasn’t something he was inclined to do.

He got stuck doing the same thing over and over. At first, he used it to his advantage and did lots of dangerous things, as there were no apparent consequences.

However, he was starting to get miserable and depressed about the tomorrow that wouldn’t come. Soon, Phil realized he needed to do something to change his life!

Through this experience, Phil had many lessons he would never forget for the rest of his life. If you want to gain the same wisdom, read on!

And don’t forget to check out these Caddyshack quotes and Bill Murray quotes.

1. “Well, maybe the real God uses tricks, you know? Maybe he’s not omnipotent. He’s just been around so long he knows everything.” – Phil Connors

2. “Well, what if there is no tomorrow? There wasn’t one today.” – Phil Connors

4. “I’m not going to live by their rules anymore.” – Phil Connors

5. “When Chekhov saw the long winter, he saw a winter bleak and dark and bereft of hope. Yet we know that winter is just another step in the cycle of life. But standing here among the people of Punxsutawney and basking in the warmth of their hearths and hearts, I couldn’t imagine a better fate than a long and lustrous winter.” – Phil Connors

6. “I think people place too much emphasis on their careers. I wish we could all live in the mountains at high altitudes. That’s where I see myself in five years. How about you?” – Phil Connors

7. “Sometimes I wish I had a thousand lifetimes. I don’t know, Phil. Maybe it’s not a curse. Just depends on how you look at it.” – Rita Hanson

Groundhog Day Quotes That Will Make You Reflect

9. Phil Connors: “Something is different.”

Phil Connors: “Anything different is good.”

10. “This is one time where television really fails to capture the true excitement of a large squirrel predicting the weather.” – Phil Connors

12. “This is pitiful. A thousand people freezing their butts off waiting to worship a rat. What a hype. Groundhog Day used to mean something in this town. They used to pull the hog out, and they used to eat it. You’re hypocrites, all of you!” – Phil Connors

13. “I was in the Virgin Islands once. I met a girl. We ate lobster, drank piña coladas. At sunset, we made love like sea otters. That was a pretty good day. Why couldn’t I get that day over and over and over?” – Phil Connors

14. Phil Connors: “What would you do if you were stuck in one place and every day was exactly the same and nothing that you did, mattered?”

Ralph: “That about sums it up for me.”

15. “There is no way that this winter is ever going to end as long as this groundhog keeps seeing his shadow. I don’t see any other way out. He’s got to be stopped. And I have to stop him.” – Phil Connors

Mrs. Lancaster: “I don’t think so, but I could check with the kitchen.”

Phil Connors: “I do. Whatever happens tomorrow, or for the rest of my life, I’m happy now, because I love you.”

23. Rita Hanson: “Phil, why weren’t you like this last night? You just fell asleep.”

Phil Connors: “It was the end of a very long day.”

25. Rita Hanson: “I like to see a man of advancing years throwing caution to the wind. It’s inspiring in a way.”

Phil Connors: “My years are not advancing as fast as you might think.”

How Would You Feel if You Were Stuck in a Loop?

People are so sure that tomorrow will come that they tend to put off a lot of things. However, would you still feel the same if you knew about Phil’s predicament?

When Phil was assigned the job of covering the annual Groundhog Day festivities, he was anything but happy. Because of his attitude, he gave a mediocre report. He thought he could quickly leave, but nature had other plans; a blizzard came, and Phil got stuck in the town.

Unbeknownst to him, he will repeat the same day over and over, and this happened until he finally changed his attitude and gave his all in reporting about the festivities. This is something we can all apply in our lives. Never take life for granted, and do your best each day.

We’ll never be sure how we’ll end up, but there will always be brighter days ahead of you. Tomorrow might not come for everyone, but if it does, hold it dear and make the most of it!

With that, we hope we were able to show you how important it is to always remain optimistic about your present, no matter how bleak it currently seems. At the same time, let this list give you hope for a better and brighter tomorrow!