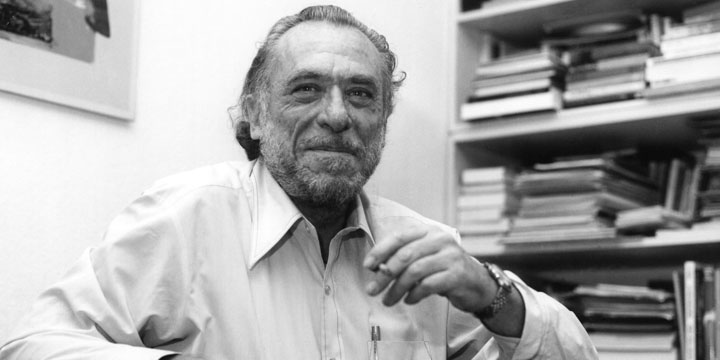 This list of the top 70 Charles Bukowski quotes will give you a sneak peek into the different sides of reality and society.

His works held so much truth, honesty, and raw opinions that he became one of the most well-known and celebrated poets of the 20th century.

What a lot of people don’t know about him is that he had written well over 5,000 short stories and poems!

Just through that, we can already see how his mind worked and his desire to share his thoughts with the world.

Charles Bukowski is also known for giving his readers a view of the harsh life and society he lived in.

His works focused on the poor conditions of urban life in America, giving us a clear picture of how the present differs and compares to the past.

Get a better understanding of Charles Bukowski through the list we’ve created for you below. Read through to the end, and list some quotes that resonate with you.

And don’t forget to check out these Ernest Hemingway quotes and Mark Twain quotes.

2. “Genius might be the ability to say a profound thing in a simple way.”

3. “Goodness can be found sometimes in the middle of hell.”

4. “Find what you love and let it kill you. Let it drain you of your all. Let it cling onto your back and weigh you down into eventual nothingness. Let it kill you and let it devour your remains. For all things will kill you, both slowly and fastly, but it’s much better to be killed by a lover.”

6. “We’re all going to die—all of us. What a circus! That alone should make us love each other but it doesn’t. We are terrorized and flattened by trivialities, we are eaten up by nothing.”

7. “There is loneliness in this world so great that you can see it in the slow movement of a clock’s hand.”

8. “The problem with the world is that the intelligent people are full of doubts, while the stupid ones are full of confidence.”

9. “Somebody asked me, ‘What do you do? How do you write—create?’ You don’t, I told them. You don’t try. That’s very important. Not to try, either for Cadillacs, creation, or immortality. You wait, and if nothing happens, you wait some more. It’s like a bug high on the wall. You wait for it to come to you. When it gets close enough you reach out, slap out and kill it. Or if you like its looks, you make a pet out of it.”

10. “If you’re going to try, go all the way. Otherwise, don’t even start. This could mean losing girlfriends, wives, relatives, and maybe even your mind. It could mean not eating for three or four days. It could mean freezing on a park bench. It could mean jail. It could mean derision. It could mean mockery—isolation. Isolation is the gift. All the others are a test of your endurance, of how much you really want to do it. And, you’ll do it, despite rejection and the worst odds. And it will be better than anything else you can imagine. If you’re going to try, go all the way. There is no other feeling like that. You will be alone with the gods, and the nights will flame with fire. You will ride life straight to perfect laughter. It’s the only good fight there is.”

11. “I wasn’t much for a petty thief. I wanted the whole world or nothing.”

16. “If you’re losing your soul and you know it, then you’ve still got a soul left to lose.”

18. “The free soul is rare, but you know it when you see it. Basically, because you feel good—very good​​when you are near or with them.”

20. “Stop insisting on clearing your head—clear your f*cking heart instead.”

Charles Bukowski Quotes to Inspire You

21. “We must bring our own light to the darkness.”

22. “What matters most is how well you walk through the fire.”

24. “Sometimes you climb out of bed in the morning and you think, ‘I’m not going to make it,’ but you laugh inside—remembering all the times you’ve felt that way.”

25. “Anything is a waste of time unless you are f*cking well or creating well or getting well or looming toward a kind of phantom-love-happiness.”

26. “If you have the ability to love, love yourself first.”

28. “It’s possible to love a human being if you don’t know them too well.”

29. “A love like that was a serious illness, an illness from which you never entirely recover.”

30. “I remember awakening one morning and finding everything smeared with the color of forgotten love.”

31. “Love is kind of like when you see a fog in the morning when you wake up before the sun comes out. It’s just a little while, and then it burns away. Love is a fog that burns with the first daylight of reality.”

32. “Love is a form of prejudice. You love what you need, you love what makes you feel good, and you love what is convenient. How can you say you love one person when there are ten thousand people in the world that you would love more if you ever met them? But you’ll never meet them.”

37. “When I say that basically writing is a hard hustle, I don’t mean that it is a bad life if one can get away with it. It’s the miracle of miracles to make a living by the typer.”

38. “Sometimes I’ve called writing a disease. If so, I’m glad that it caught me.”

39. “I kept writing not because I felt I was so good, but because I felt they were so bad, including Shakespeare, all those. The stilted formalism, like chewing cardboard.”

40. “You have to die a few times before you can really live.”

42. “Some people never go crazy, What truly horrible lives they must live.”

43. “There will always be something to ruin our lives, it all depends on what or which finds us first. We are always ripe and ready to be taken.”

45. “Your life is your life. Don’t let it be clubbed into dank submission. Be on the watch. There are ways out. There is a light somewhere. It may not be much light but it beats the darkness.”

46. “The nine-to-five is one of the greatest atrocities sprung upon mankind. You give your life away to a function that doesn’t interest you.”

47. “Poetry is what happens when nothing else can.”

49. “My ambition is handicapped by laziness.”

50. “Fiction is an improvement on life.”

51. “Real loneliness is not necessarily limited to when you are alone.”

52. “There are only two things wrong with money: too much or too little.”

53. “Death comes slowly like ants to a fallen fig.”

55. “People run from rain but sit in bathtubs full of water.”

56. “Almost everybody is born a genius and buried an idiot.”

57. “I guess the only time most people think about injustice is when it happens to them.”

58. “If you want to know who your friends are, get yourself a jail sentence.”

59. “It’s better to do a dull thing with style than a dangerous thing without it.”

62. “An intellectual says a simple thing in a hard way. An artist says a hard thing in a simple way.”

63. “You begin saving the world by saving one man at a time; all else is grandiose romanticism or politics.”

64. “Censorship is the tool of those who have the need to hide actualities from themselves and from others.”

65. “Beauty is nothing, beauty won’t stay. You don’t know how lucky you are to be ugly, because if people like you, you know it’s for something else.”

66. “They disgust me—the way they wait for death with as much passion as a traffic signal.”

67. “How the hell could a person enjoy being awakened at 6:30 AM, by an alarm clock, leap out of bed, dress, force-feed, sh*t, piss, brush teeth and hair, and fight traffic to get to a place where essentially you made lots of money for somebody else and were asked to be grateful for the opportunity to do so?”

68. “People were usually much better in their letters than in reality. They were much like poets in this way.”

69. “In the sun and in the rain, in the day and in the night, pain is a flower, pain is flowers, blooming all the time.”

70. “The best often die by their own hand just to get away, and those left behind can never quite understand why anybody would ever want to get away from them.”

How Different Do You Think Life Was in Charles Bukowski’s Time?

Charles Bukowski and his works remain ever relevant in today’s world. The rawness of his words reflects what he went through and experienced before and what we are still currently facing now.

On the outside, it may seem that much of society has already evolved and improved. But, in reality, the fundamental foundations of our communities are still, essentially, the same.

In his works, he shared that as humans, we can save ourselves from destruction and negative emotions. After all, as he stated, working the nine to five is like wasting our short lives on something that does not bring us joy. We’re given countless choices; it is up to us to pick those we know will make us happy and bring us purpose in life.

Charles Bukowski also reminds us that no feeling—whether positive or negative—is final. We can feel high up in the clouds at one point and down in the dumps the next. Be conscious of this and don’t let yourself dwell on the negative; remember that all sadness will come to pass.

We hope you were able to get some valuable lessons from this list of Charles Bukowski quotes. Never succumb to loneliness or the standards set by society. Keep in mind that you are your own person, and you control your life!

Have you read any of his novels or poems? Which Charles Bukowski quotes are your favorites? Share them in the comments section below!