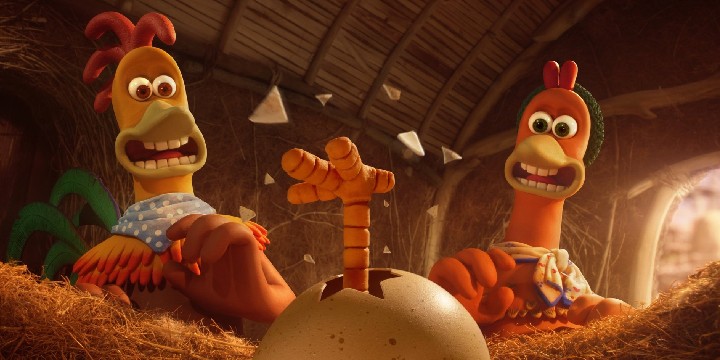 This list of Chicken Run quotes will make your day instantly brighter with all the funny lines that your favorite chickens have to offer.

Though Chicken Run is packed with hilarious lines, make no mistake; it also offers some excellent advice. Through Rocky and Ginger, we learn about perseverance and hard work. We also get a glimpse of the better life we all deserve.

It’s funny to think about learning these lessons through chickens. However, this is precisely what makes Chicken Run so iconic.

The cruel Tweedy couple who owns the farm will kill and eat any chicken that can no longer serve its purpose—lay eggs. All their attempts to escape have failed, and they seem to have lost hope until they meet Rocky.

Chicken Run is a comedy, but brace yourself for the lessons you’ll learn beyond it. Read on to find out more!

And don’t forget to check out these Cloudy with a Chance of Meatballs quotes and Sid the Sloth quotes.

Rocky Rhodes: “That’s because it takes twice as much work as perseverance.”

Babs: “Are those the only choices?”

3. Bunty: “In all my life, I’ve never heard such a fantastic—load of tripe! Oh, face the facts, ducks; the chances of us getting out of here are a million to one.”

Ginger: “Then there’s still a chance.”

Ginger: “I wasn’t on holiday, Babs. I was in solitary confinement.”

Bunty: “We haven’t tried not trying to escape.”

Ginger: “But what about Edwina? How many more empty nests will it take?”

Ginger: “So laying eggs all your life and then getting plucked, stuffed, and roasted is good enough for you, is it?”

Mrs. Melisha Tweedy: “Chicken pies, you great lummox! Imagine: in less than a fortnight, every grocer in the county will be stocked with box upon box of Mrs. Tweedy’s Homemade Chicken Pies.”

Nick: “Right you are, miss! How about this quality, hand-crafted tea set?”

Fetcher: “Or this necklace and pendant?”

Nick: “Or this little number that’s all the rage in the most fashionable coops in Paris. Simply pop it in like so, and as the French hens say, ‘Voila!’”

Nick: “It’s two hats in one, miss. For parties, for weddings. Oh, madame! This makes you look like a vision, like a dream.”

Ginger: “No, thank you. We’re building this. We need these things. Can you get them?”

Nick: “Oh, this is a big job, miss. Bigger than the other ones. It’s gonna cost ya.”

Ginger: “Same as always: one bag of seed.”

Fowler: “Don’t be ridiculous. I can’t fly this contraption.”

Ginger: “‘Back in your day?’ The Royal Air Force?”

Fowler: “644 Squadron, Poultry Division! We were the mascots.”

Ginger: “You mean you never actually flew the plane?”

Fowler: “Good heavens, no! I’m a chicken! The Royal Air Force doesn’t let chickens behind the controls of a complex aircraft!”

9. “You know what the problem is? The fences aren’t just around the farm. They’re up here, in your heads. There’s a better place out there, somewhere beyond that hill, and it has wide open places and lots of trees and grass. Can you imagine that? Cool, green grass.” – Ginger

Rocky Rhodes: “Couldn’t agree more. And I will be leaving that way.”

Babs: “What does that mean?”

Bunty: “It means pedal your flipping giblets out!”

Mrs. Melisha Tweedy: “Finally, something we agree on.”

Nick: “Yeah, and we—like a fish? You stupid Norbert.”

16. Nick: “The exits are located here and here. In the quite likely event of an emergency, put your head between your knees and—.”

Ginger: “What else can we give you?”

Ginger: “We can’t give you our eggs. They’re too valuable.”

Fetcher: “After I what?”

Rocky Rhodes: “Easy, pops. Cockfighting’s illegal where I come from.”

Bunty: “And where is that, exactly?”

Ginger: “I knew the answer would come.”

Ginger: “We’re all going to fly over that fence, and Mr. Rhodes is going to show us how, right?”

Ginger: “You can teach us.”

Rocky Rhodes: “No, I can’t. Listen, shh, you hear that? That’s the open road calling my name, and I was born to answer that call. Bye.”

Babs: “He must have very good hearing.”

20. Mac: “Thrust! I went over my calculations, hen, and I figured the key element we’re missing is thrust!”

Mac: “Thrust! Other birds, like ducks and geese, when they take off, what do they have? Thrust!”

Rocky Rhodes: “Oh! Thrust! Well, of course, we need thrust! Thrust and flying are like, well, like this. That’s flying, and—that’s thrust.”

Chicken Run Quotes That Will Keep You Entertained

Ginger: “And what’s that supposed to mean?”

Rocky Rhodes: “It means you gotta lighten up. You see, over in America, we have this rule, ‘If you want to motivate someone, don’t mention death!’”

Ginger: “Funny. Over here, the rule is, ‘Always tell the truth!’”

Rocky Rhodes: “Oh, and hey, that’s been working like a real charm, hasn’t it? Here’s some free advice: you want them to perform? Tell them what they wanna hear.”

Rocky Rhodes: “Here we go again. You know what your problem is? You’re difficult!”

Ginger: “Why, because I’m honest?! I care about what happens to them! Something I wouldn’t expect a lone, free-ranger to know anything about!”

Rocky Rhodes: “Hey, if this is the way you show it, I hope you never care about me!”

Ginger: “I can assure you, I never will!”

23. Nick: “Here’s a thought. Why don’t we get an egg and start our own chicken farm? That way, we’d have all the eggs we could eat.”

Nick: “No, no, we need an egg. You have the egg; first, that’s where you get the chicken from.”

Fetcher: “No, that’s cobblers. If you don’t have a chicken, how are you going to get the egg?”

Nick: “From the chicken that comes from the egg.”

Fetcher: “Yeah, but you have to have an egg to have a chicken.”

Fetcher: “Hang on. Let’s go over this again.”

25. “Now, the most important thing is, we have to work as a team, which means: you do everything I tell you.” – Rocky Rhodes

Rocky Rhodes: “Hey, do I tell you how to lay eggs?”

More Chicken Run Quotes for a Much-Needed Dose of Comedy

27. “Pushy Americans, always showing up late for every war. Overpaid, oversexed, and over here.” – Fowler

Rocky Rhodes: “Why, all the beautiful English chicks, of course.”

30. “Now, let that be a lesson for the lot of ya. No chicken escapes from Tweedy’s farm!” – Mr. Willard Tweedy

There’s no doubt in our minds that a flock of chickens trying to escape is chaotic and hilarious. However, if we try to understand Chicken Run from the chickens’ perspectives, this comedy movie is more than just the laughs.

Chicken Run pushes topics like perseverance and hope forward. Put yourselves in their shoes and imagine being stuck in a place where your only purpose is to work yourself to the bone: how would you feel?

We’re sure you’ll share the same sentiments as Ginger and the rest of her family. You’ll also want to try anything to escape. But, like them, there will be countless failures before you get out of your predicament.

So, like Ginger, allow yourself to believe that a better place is meant for you; you just have to fight for it! Keep going, even with the many mistakes and failures you’ll face. If you hold on to hope, when an opportunity presents itself to you, you’ll immediately notice it—like how they recognized Rocky as their only way out.

We hope we were able to help you shift your understanding of Chicken Run. Remember that it’s an inspiring tale of hope and perseverance beyond all the laughs.