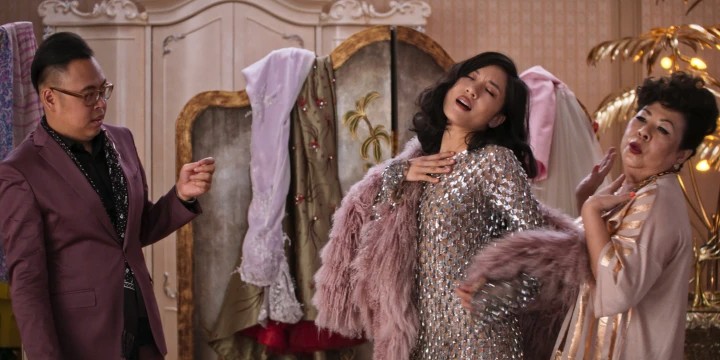 There’s no doubt that these Crazy Rich Asians quotes we’ve rounded up will bring you to an entirely new world you didn’t know existed!

It’s no secret that there are different classes in society. However, have you ever imagined what kind of lifestyle the super-rich lived? This is exactly what Crazy Rich Asians show us.

The world of the rich is hard to imagine for ordinary people like us. This makes Crazy Rich Asians such a mind-boggling piece. After all, we not only get a glimpse of their wealth, but we also better understand their family life, relationships, and what happens behind closed doors.

These things were mainly told through Nick Young and Rachel Chu’s relationship. Meeting your partner’s family for the first time is nerve-racking enough. So, just imagine how bad it was for Rachel to meet Nick’s family in Singapore.

Read on to learn more about what transpired! While you’re at it, we’re positive you’ll gain new insights from all the characters, too.

And don’t forget to check out these Crazy, Stupid, Love quotes and Fargo quotes.

1. “Our brains so hate the idea of losing something that’s valuable to us that we abandon all rational thought, and we make some really poor decisions.” – Rachel Chu

2. “Don’t chase after her and degrade yourself. I forbid it. If you go with her, you can’t come back!” – Shang Su Yi

3. Nick Young: “I always imagined what me proposing to you would be like. You know what? I had it all planned out. I’d bring you to my favorite spot on the island. There’s a hidden trail that I used to go to as a child. Now there’s a cove there that opens up to this beautiful lake. When the sun hits the horizon, I’d get down on one knee. And the rest of the world would fall away. Because it would just be you because it’s just you. I know this is a far throw from a hidden paradise. But wherever you are in the world, that’s where I belong. Rachel Chu, will you marry me? And make me the happiest man in this world?”

Passenger: “Yes! Yes! Yes! She will marry you!”

4. “Good for you! Walking away from Nick and his family’s fat-*ss property portfolio. You have no one, no net worth, but you have integrity. That’s why I respect you.” – Goh Peik Lin

5. Eleanor Sung-Young: “You asked about my ring. The truth is Nick’s father had it made when he wanted to propose to me because Ah Ma wouldn’t give him the family ring. I wasn’t her first choice. Honestly, I wasn’t her second. I didn’t come from the right family or have the right connections. And Ah Ma thought I would not make an adequate wife to her son.”

Rachel Chu: “But she came around, obviously.”

Eleanor Sung-Young: “It took many years, and she had good reason to be concerned. Because I had no idea the work and the sacrifice it would take. There were many days when I wondered if I would ever measure up. But having been through it all, I know this much: you will never be enough.”

6. Eleanor Sung-Young: “Ah Ma says if we don’t pass traditions down like this, they’ll disappear.”

7. “I withdrew from university when we got married. I chose to help my husband run a business and to raise a family. For me, it was a privilege. But for you, you may think it’s old-fashioned. It’s nice you appreciate this house and us being here together wrapping dumplings. But all this doesn’t just happen. It’s because we know to put family first instead of chasing one’s passion.” – Eleanor Sung-Young

8. “Well, exactly. You are so different from all of the women that I grew up with. And I love who I am around you. I don’t want that to change. And that’s selfish, I know. I’m sorry that you had to deal with that on your own. But I’m here now. Whatever happens, we’ll get through it together. Dead fish and all. Alright?” – Nick Young

9. “It was never my job to make you feel like a man. I can’t make you something you’re not.” – Astrid Leong-Teo

10. “I’m not leaving because I’m scared, or because I think I’m not enough—because maybe for the first time in my life, I know I am. I just love Nick so much; I don’t want him to lose his mom again.” – Rachel Chu

Crazy Rich Asians Quotes That Will Blow Your Mind

13. “Pursuing one’s passion. How American. Well, your mother’s very open-minded, not like here, where parents are obsessed with shaping the life of their children.” – Eleanor Sung-Young

14. “Rachel, these people aren’t just rich, okay? They’re crazy rich. Look. There’s new money all over Asia. We got the Beijing billionaires, the Taiwan tycoons, but the Young family, they’re old-money rich. They had money when they left China in the 1800s. And they went all the way down here. Not there—here. They came to Singapore when there was nothing but jungle and pig farmers. There was a snake here, eating an apple. You know what I mean? And they built all of this. Now, they’re the landlords of the most expensive city in the world. Here you go. These people are so posh and snobby; they’re snoshy.” – Goh Peik Lin

15. “It’s about time somebody stood up to Auntie Eleanor. But you, not me, oh God. She can’t ever know I was here.” – Oliver T’sien

16. “Gosh, she’s so badass. You know, I bet if you told her you’d leave Nick for a million dollars, she would write that check. They do that around here.” – Goh Peik Lin

17. Goh Peik Lin’s Mother: “We were inspired by the Hall of Mirrors in Versailles.”

Rachel Chu: “That is exactly what a super-rich person would say.”

18. Nick Young: “So, what about us taking an adventure east?”

Rachel Chu: “You wanna get pork buns in the East Village. That’s what it is, isn’t it?”

Nick Young: “I was actually thinking of further east.”

Nick Young: “Like Singapore—for spring break? Colin’s wedding. We’ve been dating for over a year now, and I think it’s about time people met my beautiful girlfriend. Come on; I’m Colin’s best man. Don’t you wanna see where I grew up? Meet my family, my Ah Ma?”

19. “It’s an illusion. We understand how to build things that last. Something you know nothing about.” – Eleanor Sung-Young

20. Rachel Chu: “She’s like trying to play a game of chicken with me. Where she’s like coming at me and thinking I’m going to swerve like a chicken.”

Rachel Chu: “I’m not gonna swerve. Not for her.”

Goh Peik Lin: “You’re not a chicken. You’re gonna roll up to that wedding; you’re gonna be like, ‘Bak-bak, b*tch!’”

21. “Remember, every treasure comes with a price.” – Kevin Kwan, Author

22. “Eleanor had a long-held theory about men. She truly believed that for most men, all that talk of ‘being in love’ or ‘finding the right one’ was absolute nonsense. Marriage was purely a matter of timing, and whenever a man was finally done sowing his wild oats and ready to settle down, whichever girl happened to be there at the time would be the right one.” – Kevin Kwan, Author

23. “Doing nothing can sometimes be the most effective form of action. If you do nothing, you’ll be sending a clear message: that you’re stronger than they think you are. Not to mention a lot classier. Think about it.” – Kevin Kwan, Author

24. “Just because some people actually work for their money doesn’t mean they are beneath you.” – Kevin Kwan, Author

25. “I never want to be a part of a family like yours. I can’t marry into a clan that thinks it’s too good to have me. And I don’t want my children to ever be connected to such people. I want them to grow up in a loving, nurturing home, surrounded by grandparents and aunts and uncles and cousins who consider them equals.” – Kevin Kwan, Author

In Your Opinion, What’s the Most Powerful Scene or Line From Crazy Rich Asians?

Learning about a lifestyle different from what we currently have will pique everyone’s curiosity. After all, could you imagine living the same life as those crazy rich Asians? However, though their wealth is enough to last them for generations, are they all truly happy?

As we’ve seen from the movie, their lifestyle is unique. While it has many advantages, for some, the cons outweigh the pros. For families like this, it’s normal to control their children’s decisions, relationships, and emotions.

They coddle their children, try to shape them to be a specific type of person, and forget that they also have their own lives to live. If we try to limit our children’s freedom and try to control them, we’re not the ones who will suffer in the end. Our kids must learn to decide on their own, make mistakes, and resolve their issues.

Money is a perk or an added privilege. It should never hinder you from living a life of happiness, integrity, and love.

With that, we hope we were able to add more meaning to your initial understanding of Crazy Rich Asians. Their life is completely different from ours, but remember that they’re human, too!