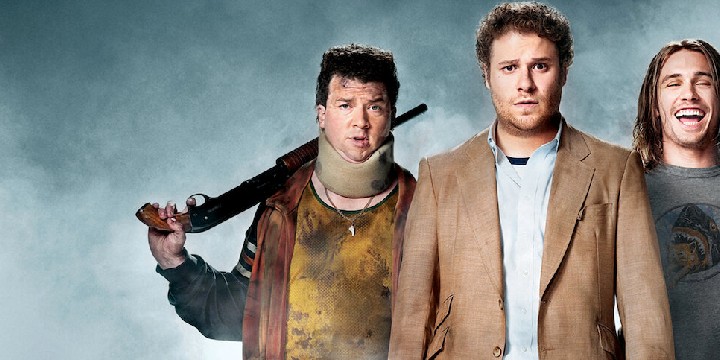 These Pineapple Express quotes will show how drugs and other vices can destroy everything in your life!

Many people believe that marijuana holds the secret to happiness. But, they fail to realize that the pleasure they would get at the beginning cannot be compared to the suffering awaiting them at the end. Addiction is never a good idea, and this is a lesson we can all get from Pineapple Express.

The movie is about the journey of a marijuana enthusiast, Dale Denton, and his drug dealer, Saul. Everything starts when Dale witnesses a murder in the house of a local drug lord named Ted. Afraid that the murder will spread, Ted hunts down Dale and Saul, and the two run for their lives.

Their escape results in many hilarious scenes that’ll make you laugh out loud. So, if you want to brighten up your day and learn some lessons along the way, then reading this collection is perfect!

And don’t miss out these The Hangover quotes and Bridesmaids quotes.

1. Saul Silver: “How about in the park, when I said you were my friend? You didn’t say anything back.”

Dale Denton: “Well, that’s easy. It’s because we’re not friends. You are my drug dealer. There’s one reason we know each other; I like the drugs you sell, that’s it. And if you didn’t sell those drugs, I would have no idea who you were, and I would be fantastic right now! Instead of looking like this.”

2. Saul Silver: “Just sit back and get ready to enjoy some of the rarest weed known to mankind.”

3. Dale Denton: “Dudes, seriously. We came here for a reason. Just ask him.”

Saul Silver: “Can I have a piece of that?”

Dale Denton: “What are you doing? Don’t ask for a piece.”

Saul Silver: “I can’t have a piece of that?”

Red: “No, you cannot have a piece. This is private. You know what today is?”

Red: “This is my cat’s birthday today.”

Dale Denton: “I don’t see a cat in here. I’m sorry. Did you let it out by accident?”

Red: “No, because he died three months ago, okay? So now who’s the funny guy?”

Red: “Today is his birthday, and it is a tradition that on his birthday, I get up extra early and make him his favorite kind of dessert.”

Red: “Yeah, maybe. Maybe he went to heaven. He was a little f*cker. He could’ve gone to hell.”

4. Dale Denton: “Okay, even if he found that roach, how could he know where you are?”

Dale Denton: “Not a compliment.”

Saul Silver: “No, no. What do you mean, the battery’s dead?”

Dale Denton: “How can I explain this to you differently? The battery is dead. It ceased to live. It’s deceased now. The car needs a battery to start, Saul.”

Saul Silver: “How did this happen?”

Dale Denton: “Well, we clearly fell asleep with the battery on and—.”

Dale Denton: “That’s not gonna get us a ride, man.”

6. “I may act tough, but I got a lot of feelings, and you hurt damn near every one of them.” – Matheson

Dale Denton: “The Asians? What? What Asians?! Indians are technically Asians!”

Red: “Yeah, little, little—just, little Asian people, like the Asians, with the guns, and the drugs, and not his friends.”

Red: “You guys got into a f*cking car chase? Are you f*cking kidding me?”

Saul Silver: “I like had my foot through the window.”

9. “This is, like, the apex of the vortex of joint engineering.” – Saul Silver

Saul Silver: “You been crying?”

Saul Silver: “So, does that mean f*cking herpes?”

Red: “Yeah, well, I’m gonna try to definitely put some sort of medical ointment on it. I’ve been taking Vicodin. That doesn’t really take the swelling down, though.”

Saul Silver: “Because I am in the dumpster already.”

16. Dale Denton: “I go visit her in high school, and all the guys she goes to school with are, like, strong and handsome and really, like, funny and do good impressions of Jeff Goldblum and shit like that. And, like, I just feel like a fat, dumb f*cking stinky puss turd when I’m there.”

Dale Denton: “It sucks for my ego.”

Pineapple Express Quotes for a Day Filled With Sarcasm

18. Saul Silver: “I wish I had a job like that. Where I could just sit around and smoke weed all day.”

Dale Denton: “Hey, you do have that job. You do sit around and smoke weed all day.”

Matheson: “I’m gonna kill the f*ck out of you! I hope you enjoy these last 17 minutes of your life.”

20. Red: “Seriously! I know this sounds weird, but can we be best friends? Just us? For real?”

Dale Denton: “I think we should all be best friends!”

Red: “We should be! You guys are my best friends. We shared a moment.”

Saul Silver: “You guys are like both of my best friends, and you didn’t even know it, but now you know it, and we’ll all be best friends!”

Dale Denton: “You know what we should get? You know those hearts that break up, and it’s like, ‘best friends?’ We should get like, a three-way one of those, man!”

Red: “I don’t even know if they f*cking make those!”

Dale Denton: “We should make the first ones!”

Saul Silver: “Three way! I want the middle piece, though! It’ll be crooked on both sides.”