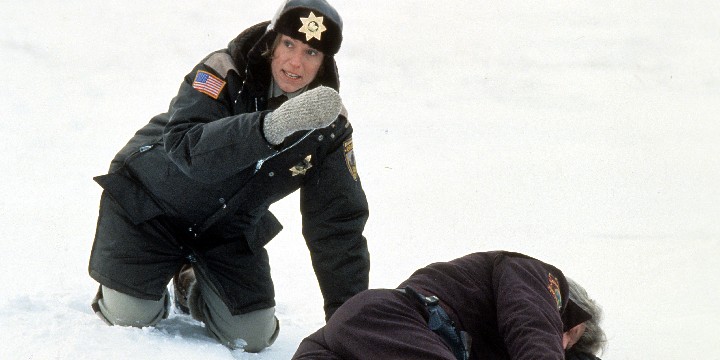 If you’re a fan of movies created by the Coen brothers, you’ll love this collection of the best Fargo quotes!

Many will go to any length for money—even kidnapping and harming one’s wife. In Fargo, Jerry worked as an executive sales manager for a Minneapolis dealership owned by his father-in-law. You might think it’s the perfect setup for a booming family business, but it’s not; Jerry was desperate for more money.

He hires people to kidnap his wife in an attempt to get money in the form of a ransom. However, soon, things get out of control, and the chase leads to people getting killed. This is where Marge Gunderson, a pregnant officer, steps in.

You might think that there’s someone else better for the job. After all, Marge is kind, unassuming, and seemingly naive. However, never underestimate an underdog; Marge is determined to solve this case and put the criminals to justice.

Fargo will keep you on the edge of your seat throughout the movie. So, for a sneak peek of its most exciting scenes, check our list below!

And don’t miss out these Whiplash quotes and Crazy, Stupid, Love quotes.

1. “So that was Mrs. Lundegaard on the floor in there. And I guess that was your accomplice in the wood chipper. And those three people in Brainerd. And for what? For a little bit of money. There’s more to life than a little money, you know. Don’t you know that? And here ya are, and it’s a beautiful day. Well, I just don’t understand it.” – Marge Gunderson

Jerry Lundegaard: “What the heck ya mean?”

3. Jerry Lundegaard: “Ma’am, I answered your question. I answered the darned—I’m cooperatin’ here! And, I—.”

Marge Gunderson: “Sir, you have no call to get snippy with me. I’m just doing my job here.”

Jerry Lundegaard: “I’m—I’m not arguing here! I’m cooperating. So there’s no need to—we’re doin’ all we can here.”

4. “You’ll take care of it? You’re a smooth smoothie, ya know?” – Gaear Grimsrud

9. Marge Gunderson: “Say, Lou, did you hear the one about the guy who couldn’t afford personalized plates, so he went and changed his name to J3L2404?”

Fargo Quotes That Will Make You Snicker

11. “Would you crack the f*ckin’ window open, man? You know, it’s proven that second-hand smoke is, uh, carcin—uh, you know, a cancer agent.” – Carl Showalter

Fargo Quotes to Keep In Your Memory

19. Norm Gunderson: “People don’t much use the three-cent.”

Marge Gunderson: “Of course they do. Whenever they raise the postage, people need the little stamps.”

Carl Showalter: “I guess you think you’re—you know, like an authority figure, with that stupid f*ckin’ uniform. King clip-on-tie there, big f*ckin’ man. You know these are the limits of your life, man! The rule of your little f*ckin’ gate here!”

21. Carl Showalter: “You ever been to Minneapolis?”

Carl Showalter: “Would it kill you to say something?”

Carl Showalter: “‘No.’ That’s the first thing you’ve said in the last four hours. That’s a fountain of conversation there, buddy. That’s a geyser.”

24. “One of us pays the other for half. If you want the car, you have to give me your half of the money.” – Gaear Grimsrud

25. “Well, we’ve never done this before. But seeing as it’s special circumstances and all, he says I can knock a hundred dollars off that Trucoat.” – Jerry Lundegaard

What Did You Learn From Marge Gunderson?

To be in the police force and to lead many cases and people, one needs to be a great leader like Marge Gunderson. At first glance, you’d think she’s a simple woman who can’t be bothered; after all, she’s already heavily pregnant. However, in Fargo, we see how she stepped into her role as the police chief beautifully and confidently.

Without her leadership, the case wouldn’t move forward, let alone be solved. She was persistent, observant, and knew when to guide and intervene in her team’s work.

As their investigation progressed, it became clear to her that not everything would go according to plan. But, did she give up? She never did; Marge accepted her losses when they came, reassessed, regrouped with her team, and tried again.

Let’s also not forget how firm Marge is regarding her values in life. One of her most powerful lines goes, “There’s more to life than a little money.” And this is something we must remember as we move through life.

Never confuse money with success and happiness. By doing so, you’ll figure out the true meaning of life and joy!