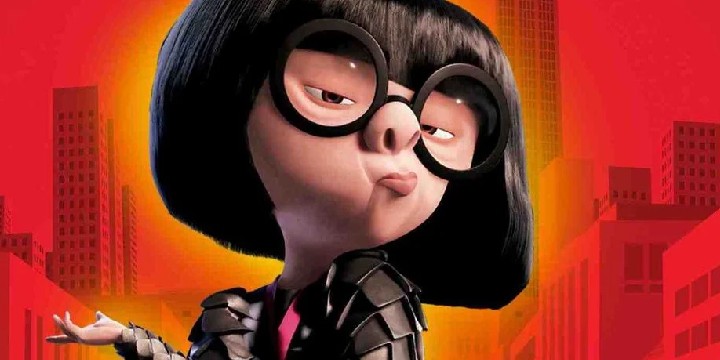 These Edna Mode quotes that we’ve gathered will make you into a fearless person and take pride in every accomplishment you have.

Edna Mode is a supporting character in the movie, The Incredibles.

Her character’s role is to be a costume designer who makes suits for superheroes. Her talent is to create new and unique things that allow her clients to look perfect.

If you’re interested to know more about her classic lines, read the whole collection below. We’re sure her witty and frank personality will inspire you.

And don’t forget to check out these The Incredibles quotes, Daffy Duck quotes and Charlie Brown quotes.

1. “I never look back, dahling. It distracts from the now.”

3. “My name is Edna but some of the girls call me Eddy after they get to know me better.”

4. “Done properly, parenting is a heroic act. Done properly! I am fortunate that it has never afflicted me.”

8. “All was well, another day saved, when his cape snagged on a missile fin!”

9. “I cut it a little roomy for free movement, the fabric is comfortable for sensitive skin.”

11. “Pull yourself together! What will you do? Is this a question? You will show him that you remember that he is Mr. Incredible! And you will remind him who you are! Well, you know where he is.”

15. “Go check the electric fence or something!”

18. “And it can also withstand a temperature of over 1000 degrees. Completely bulletproof.”

23. “This is designed by Vincento? Explain yourself!”

29. “What are you talking about? You are Elastigirl! My God!”

Edna Mode Quotes About Herself

30. “He is bright and I am stimulating. We deserve each other.”

33. “I have no strength left. Nothing. I couldn’t even open my pocketbook on the bus today. A little boy hadda help me.”

34. “Mr. Maxton, I’m not doing anything. I know a swell place where we can eat. The food is the bitter end!”

35. “Yes, I’m sure your gratitude is quite inexpressible. Don’t ask me to do it again, dahling, my rates are far too high.”

38. “Jack-Jack widened his eyes to make them shaped like mine and grows hair that looks exactly like my hairstyle.”

Edna Mode Quotes on Her Creations and Masterpieces

40. “Your boy’s suit I designed to withstand enormous friction without heating up or wearing out, a useful feature. Your daughter’s suit was tricky, but I finally created a sturdy material that can disappear completely as she does. Your suit can stretch as far as you can without injuring yourself, and still retain its shape. Virtually indestructible, yet it breathes like Egyptian cotton.”

41. “Blended kevlar with carbide for durability under duress and comfort also. Interwoven with these fabrics, are a mesh of tiny sensors that monitor the baby’s physical properties.”

44. “Although I have doubtlessly exceeded your expectations for a single night’s work. The suit and device contain a few more features we need to discuss.”

Hilarious Edna Mode Quotes That Will Make You Laugh

45. “Keep your fingers above the sheets. We only change ’em once a week!”

46. “Yes, yes, marvelous suit, dahling, much better than those horrible pajamas he used to wear.”

50. “The human race is responsible for the unemployment? I never would’ve guessed. All this time, I kept thinking it was somebody else.”

54. “What’s that gun doing in your room? Suppose I phone the police, told them there’s a bloke in my hotel―who’s planning to shoot somebody?”

55. “I often work to music, and I noticed the baby responds to it as well. Specifically Mozart.”

56. “I understand your lack of sleep is confusing you, Robert. Babies can be anything, and your child is no exception. Shows unlimited potential, Robert. That’s why I worked in a creative fever. Auntie E has stayed up all night, making sure you look fabulous in your uniform.”

57. “Of course you can leave the baby overnight. I’m sure filling in for Helen is challenging, and you are very tired, and the other children need you and miss you, and you must go to them. Auntie Edna will take care of everything, so drive safely and goodbye.”

58. “Any solution involving cookies will inevitably result in the demon baby.”

59. “Oh, pish-posh, dahling. Your bill will be covered by my fee for being Mr. Incredible, Elastigirl, and Frozone’s exclusive designer throughout the known universe and until the end of time. But babysitting this one, I do for free, dahling.”

60. “Milan, dahling. Milan. Supermodels. Heh! Nothing super about them―spoiled, stupid little stick figures with poofy lips who think only about themselves. Feh! I used to design for gods!”

62. “Men at Robert’s age are often unstable, prone to weakness.”

64. “The fire retardant is blackberry-lavender, dahling. Effective, edible, and delicious.”

70. “Fascinating! Are you seeing this Robert?”

What Do You Think About Edna Mode’s Realness and Style in The Incredibles?

We seldom see a costume designer’s perspective in movies. So, it’s a treat to see Edna’s hilarious character in The Incredibles. Her character was portrayed as one of the most fabulous stylists and greatest engineers of all time.

She uses her intelligence to create unique and high-end costumes for all the superheroes. She is truly a diversified designer that will make you a fabulous and functional wardrobe.

What we learn from Edna Mode is to never look back. She moved on from her past designs and mistakes and chose to improve and evolve instead.

Every day is a new day, so we should enjoy and concentrate on today as Edna did. You have to live your life to the fullest to grow and improve.

Which of these Edna Mode quotes are your favorites? Are there any quotes you’d like to add? Be sure to leave a comment below!