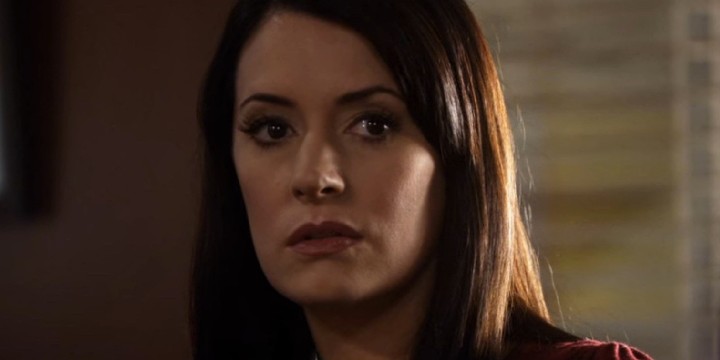 We’ve compiled our favorite Emily Prentiss quotes that will inspire you to value justice and women’s power.

Emily Prentiss is a fictional character played by Paget Brewster in the Criminal Minds crime drama series. As one of the BAU’s only female agents, she works extra hard to prove herself deserving of her position.

We’ve gathered our favorite quotes to help you get a glimpse into this fantastic character. If you’re curious to find out more, read through the complete list below!

And don’t forget to check out these Criminal Minds quotes and Spencer Reid quotes.

1. “Well, I think politics makes people distrustful. I think it makes them hate themselves. I think it tears families apart, and damages people.” – Emily Prentiss

2. “It’s always sad seeing someone’s life reduced to the things they had with them when they died. It’s just so clear they didn’t know how short their time would be.” – Emily Prentiss

3. “It never ceases to amaze me how dark obsession can get.” – Emily Prentiss

4. “I’ve always heard every ending is also a beginning. We just don’t know it at the time. I’d like to believe that’s true.” – Emily Prentiss

5. “The garden variety family annihilator is usually a narcissistic male patriarch experiencing psychological stress. This causes him to become homicidal and then suicidal.” – Emily Prentiss

6. “Gratitude is a burden and revenge is a pleasure.” – Emily Prentiss

7. “Home is where you’re supposed to feel safe. Nobody deserves to have that taken away.” – Emily Prentiss

8. “It’s the crime scene investigators. They wanna play cops instead of just being scientists. And they end up trampling on everything.” – Emily Prentiss

9. “When a woman tells a man about her feelings, she doesn’t want him to fix her. She wants him to shut up and listen.” – Emily Prentiss

11. “It is only in love and murder that we still remain sincere.” – Emily Prentiss (Friedrich Dürrenmatt)

12. “Wild animals never kill for sport. Man is the only one to whom the torture and death of his fellow creatures is amusing in itself.” – Emily Prentiss (James Anthony Froud)

13. “I believe that the only way to reform people is to kill them.” – Emily Prentiss (Carl Panzram)

14. “We all wear masks and the time comes when we cannot remove them without removing our own skin.” – Emily Prentiss (André Berthiaume)

15. “Reason is not automatic. Those who deny it cannot be conquered by it.” – Emily Prentiss (Ayn Rand)

16. “The secret to getting away with lying is believing with all your heart—that goes for lying to yourself even more so than lying to another.” – Emily Prentiss (Elizabeth Bear)

18. “He who does not punish evil, commands it to be done.” – Emily Prentiss (Leonardo da Vinci)

19. “There can be no good without evil.” – Emily Prentiss

20. “No man is happy without a delusion of some kind. Delusions are as necessary to our happiness as realities.” – Emily Prentiss (Christian Nestell Bovee)

21. “Confession is always a weakness. The grave soul keeps its own secrets, and takes its own punishment in silence.” – Emily Prentiss (Dorothea Dix)

22. “History has a way of altering villains so that we can no longer see ourselves in them.” – Emily Prentiss (Adam Serwer)

23. “All the art of living lies in a fine mingling of letting go and holding on.” – Emily Prentiss (Havelock Ellis)

24. “Happy families are all alike. Every unhappy family is unhappy in its own way.” – Emily Prentiss (Leo Tolstoy)

25. “The most authentic thing about us is our capacity to create, to overcome, to endure, to transform, to love, and to be greater than our suffering.” – Emily Prentiss (Ben Okri)

26. “What happened in the past that was painful has a great deal to do with what we are today.” – Emily Prentiss (William Glasser)

27. “We must be willing to let go of the life we have planned, so as to accept the one that is waiting for us.” – Emily Prentiss (John Campbell)

28. “There is no doubt that it is around the family and the home that all the greatest virtues—the most dominating virtues of human society—are created, strengthened, and maintained.” – Emily Prentiss (Winston Churchill)

30. “When there is pain, there are no words. All pain is the same.” – Emily Prentiss (Toni Morrison)

31. “There is a sacredness in tears. They are not the mark of weakness but of power. They are messengers of overwhelming grief and of unspeakable love.” – Emily Prentiss (Washington Irving)

32. “Life’s under no obligation to give us what we expect.” – Emily Prentiss (Margaret Mitchell)

34. “Nothing revives the past so completely as a smell that was once associated with it.” – Emily Prentiss (Vladimir Nabokov)

35. “We’re all sentenced to solitary confinement inside our own skins, for life.” – Emily Prentiss (Tennessee Williams)

37. “Cruelty, like every other vice, requires no motive outside of itself. It only requires opportunity.” – Emily Prentiss (George Eliot)

38. “Oh what a tangled web we weave, when first we practice to deceive.” – Emily Prentiss (Sir Walter Scott)

39. “Memory is a complicated thing, relative to truth but not its twin.” – Emily Prentiss (Mary Schafer)

40. “We are each our own devil, and we make this world our hell.” – Emily Prentiss (Oscar Wilde)

41. “Nothing is more sad than the death of an illusion.” – Emily Prentiss (Arthur Koestler)

42. “There’s no chance, no destiny, no fate, that can circumvent or hinder or control the firm resolve of a determined soul.” – Emily Prentiss (Ella Wheeler Wilcox)

43. “Originality is nothing but judicious imitation.” – Emily Prentiss (Voltaire)

Spencer Reid: “For what?”

Emily Prentiss: “For being you.”

45. Aaron Hotchner: “Prentiss, this is the job, and I need to know that you can be objective.”

Emily Prentiss: “And I need to know that I can be human.”

46. “I’ve got a Glock leveled at your crotch. What’s to stop me from taking you and the little ones out right now?” – Emily Prentiss

47. “I know what the world can do to a girl who only sees beauty in it.” – Emily Prentiss

Detective Cooper: “I don’t know, you’re the fortune teller. You tell me.”

50. “Scratch got deeper into my head than I care to admit, and the only way I was able to stay sane was by repeating a mantra, two words. You know what those two words were? ‘Wheels up.’ It saved my life when I wasn’t sure I was gonna make it because it reminded me that you were out there fighting, so take your rest—you’ve earned it. But when we get back, wheels up, Matt.” – Emily Prentiss

51. “You’re finally gonna meet your soulmate, Joe—in prison. Only you’re not going to be able to push him around the way you did those women. And when he comes for you, in the middle of the night, when you’re least expecting it you do me a favor—play along.” – Emily Prentiss

52. “Is that what you’re looking for? A way to blame this on him? What good could that possibly do?” – Emily Prentiss

53. “So whatever game it is you’re trying to play here, I want no part of it.” – Emily Prentiss

54. “These wind chimes are made of bone. I think it’s human rib bones.” – Emily Prentiss

55. “A lion’s work hours are only when he’s hungry; once he’s satisfied, the predator and prey live peacefully together.” – Emily Prentiss (Chuck Jones)

56. “Beyond the East, the sunrise; beyond the West, the sea; and the East and West, the wander—thirst that will not let me be.” – Emily Prentiss (Gerald Gould)

Emily Prentiss Quotes About Her Experiences as an Agent

57. “We need to get invited in that door. He’s looking for female authority figures. If he lets me in I can signal as soon as I see anything that gives us cause.” – Emily Prentiss

58. “Fantasy’s over. Is that what you did to them? You hit them to shut them up? Then force them to play along with your sick delusion.” – Emily Prentiss

59. “Derek, I have a tremendous amount of respect for you, but there are some questions that, if you have to ask them, it means you probably couldn’t handle the answer.” – Emily Prentiss

60. “What’s missing from the Michelle Watson murder is any sign of rage or overkill.” – Emily Prentiss

61. “Well, if I’m no longer in the FBI then you have no authority over me. I’m just a civilian knocking on a little boy’s door.” – Emily Prentiss

62. “Of the 20 self-described pickup artists in the area, there’s only one guy who encourages his students to dress like, uh, space cowboys.” – Emily Prentiss

63. “If you get close to him, you won’t miss him. He will smell like a combination of human filth and paint thinner.” – Emily Prentiss

64. “No, Paul. I’m baffled. I cannot figure out what the unsub could have learned from you.” – Emily Prentiss

66. “Is there any possibility that, while we’ve been talking, you’ve been multitasking?” – Emily Prentiss

67. “There was this young prince who wanted to win the heart of the fairest maiden in the land, so he climbed to the top of the tallest tower in the kingdom and he caught a falling star for her. Unfortunately, he was so excited that he dropped it and it smashed into all of these pieces. So he frantically put it back together again to prove his undying love to her and he succeeded and they lived happily ever after.” – Emily Prentiss

68.“Hey, uhm, I am looking for a drug that would temporarily paralyze or subdue someone, not kill them, but give full control.” – Emily Prentiss

69. “It’s called a ‘star puzzle.’ It’s basically impossible to figure out. You have to put all of the pieces back together to form a perfect star. But the origin of it is, um, kind of a romantic tale.”– Emily Prentiss

70. “And the point is, it’s basically impossible to do because you have to take all of those pieces and fit them together exactly—there’s a lot to hate about you, Dr. Reid.” – Emily Prentiss

Do You Want to Work as an Agent Like Emily Prentiss?

Emily Prentiss first appeared in the series to replace Agent Elle Greenaway. As an agent, she assists in profiling and finding the perpetrators in the cases assigned.

She is also very driven and is willing to put herself in danger for the sake of others’ safety. She abides by her own righteous morals, is committed to justice, and demonstrates a high level of empathy.

Indeed, Emily Prentiss proves how intelligent, calm, and selfless a woman can be in her pursuit of the truth. Despite the judgment, she demonstrates how a woman can contribute to the country’s safety.

We hope you were able to get a glimpse of how vital her role is in fighting against crime and for justice! Make sure you look out for her the next time you watch Criminal Minds!

So, after reading the quotes above, did you feel empowered? Please, share your favorite quotes from her in the comments section!