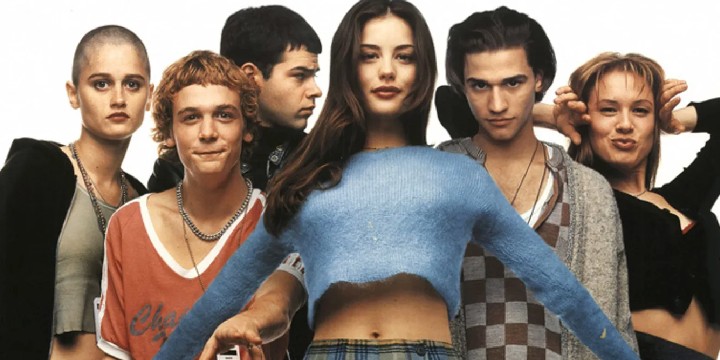 These Empire Records quotes will show you how teamwork will always bring you closer to success!

Empire Records is a story that revolves around themes such as drama, comedy, romance, and music. Joe Reaves, the owner of a studio named Empire Records, employs a group of musically-inclined people. Then, everyone suddenly finds out that there’s a chance that the store will be sold to a big chain.

Everyone tries to stop the acquisition from happening. They went through many things together, and at the end of their journey, they were able to form a one-of-a-kind bond.

It’s no surprise that fighting off a large chain is hard; it’s like a fight between David and Goliath! But, no matter how difficult our situations are, we must never lose hope. So, read through this list of Empire Records quotes if you need some inspiration!

And don’t miss out these Dazed and Confused quotes and Pretty in Pink quotes.

2. A.J.: “Lucas, do you think it’s possible for a person to be in love with someone else and not even know it?”

Lucas: “In this life, there is nothing but possibilities.”

Joe Reaves: “What makes you think that?”

Lucas: “Who knows where thoughts come from? They just appear.”

4. “This music is the glue of the world, Mark. It’s what holds it all together. Without this, life would be meaningless.” – Eddie

6. “It’s something you gotta invest in when you’re young. It’s like life, it goes around, and around.” – Eddie

Empire Records Quotes to Revisit the Characters’ Most Iconic Lines

11. Warren: “Who glued these quarters down?”

Debra: “God, that is so clever. I swear you get smarter the shorter your skirt gets.”

Gina: “And you get smarter the shorter your hair gets, so it’s probably a good thing you went with that. It’s a wonderful look for you, darling.”

Empire Records Quotes for a Day Full of Laughter

Warren: “Old enough to kick your butt through your skull and splatter your brains on the wall.”

Joe Reaves: “I don’t know. I’m either going to jail or hell. I can’t decide.”

Eddie: “No, I mean, do you really know where Harvard is? It’s another planet, man—another universe. Totally unlike the one we know. Filled with big blond guys who eat ivy and row boats.”

18. A.J.: “What’s with you? Yesterday you were normal, and today you’re like the Chinese guy from Karate Kid. What’s with you today?”

Warren: “It’s for my girlfriend, okay?”

Lucas: “Sure it is. You know, someone like you needs to diminish their criminal impulses, not magnify them. Maybe some jazz or some classical.”

Joe Reaves: “And the man calls all the shots.”

Joe Reaves: “Let me explain it to you. Mitchell’s the man. I’m the idiot. You’re the screw-up. And we’re all losers. Welcome to Music Town.”

Joe Reaves: “Oh yeah, my wife left me for another woman, and my girlfriend forced me to leave at gunpoint. Does this qualify me?”

Lucas: “My life has reached its pinnacle. Joe is letting me close the store tonight.”

Joe Reaves: “You say I love you. What do you want, written instructions?”

24. “I tried to kill myself with a Lady Bic. A pink plastic razor with daisies on it and a moisturizing strip.” – Debra

Debra: “We’re both screwed. At least you’re used to it.”

Who Are Your Favorite Characters From Empire Records, and What Did They Teach You?

Our lives aren’t meant to be lived on our own. Perhaps that’s precisely why we’re called social beings. We always have family, friends, and even strangers who are there to support us in every situation we encounter.

Yes, we’re all different and unique. But, that doesn’t stop us from building new relationships that are stronger than ever! This is precisely what happened in Empire Records.

Lucas, Mark, Debra, and the rest of the crew came together while they were employed in Empire Records. This was their commonality. They were all different individuals, living their own lives with their passions, problems, and more.

Yet, no matter how different they were, they supported each other and worked together to try to save their workplace. They were all young, and they had limited resources. But, that didn’t stop them from fighting off those who wanted to acquire the store.

Empire Records is indeed a movie that reminds us that nothing is impossible if we have friends behind our backs. So, if you need a reminder of this fact, read this list of quotes again!