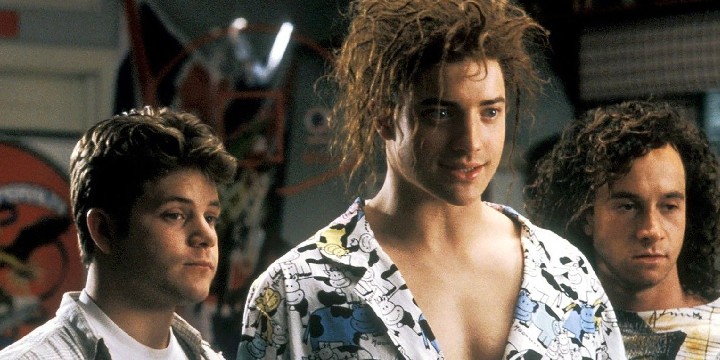 If you’re aiming for the spotlight, this list of Encino Man quotes is here to lead the way!

This comedy movie tells the tale of two friends named Stoney and Dave, who strive to attain popularity. One day, they discover a caveman frozen in a block of ice in Dave’s backyard. When the ice melted, they had the idea of using the caveman to gain the fame they wanted.

To do this, they got him some clothes and told Dave’s family that he was an exchange student sent to live with them. True enough, they enrolled him in school, which began their road to fame.

While it’s a comedy movie at heart, Encino Man can still teach you some great lessons you can apply in your everyday life. To get a better understanding of the plot and its morals, read on!

And don’t forget to check out these Weird Science quotes and Kindergarten Cop quotes.

2. Stoney Brown: “Um, Robyn Sweeney, bro? She’s not going to the prom with you, man. I wish she would, but she’s really not.”

David Morgan: “What are you talking about? Robyn Sweeney is mine. She’s become a major babe, and she loves me.”

Stoney Brown: “The truth is bro, life’s about greasin’ the do back, buddy, and wheezin’ on the buff—fest, man. High school was interesting, all right? It was kinda like a harsh ride. Ahhh, ah, ow, ow! We’re going on to bigger and better things, buddy!”

David Morgan: “Stoney, I am on to bigger and better things!”

3. “If you’re edged ’cause I’m wheezin’ all your grindage, just chill. ‘Cause if I had the whole Brady bunch thing happenin’ at my pad, I’d go grind over there, so don’t tax my gig so hardcore cruster.” – Stoney Brown

5. Stoney Brown: “Far too much responsibility for me, anyways, I’m already popular!”

David Morgan: “Yeah, you travel in large groups of one, Stoney.”

6. David Morgan: “The only thing you have ever cared about was nugs, chillin’, and grindage.”

David Morgan: “That’s convenient. You came along for the ride, and you let me do the dirty work, ‘cause you thought it might work out to your advantage.”

Stoney Brown: “Those are desperate words of a loser. Maybe Matt Wilson was right about you all along.”

David Morgan: “Take that back, Stoney.”

Stoney Brown: “No, you take that back!”

David Morgan: “Take it back!”

Encino Man Quotes That You Must Read Today

8. Stoney Brown: “Look, Dave, you’re gonna have to just mellow out, bro, on this whole Robyn thing; she always shines you.”

David Morgan: “You don’t understand. We have history.”

Stoney Brown: “Hey, you had history—pre-freshman history—could’ve had her back then, man.”

Linkavitch Chomofsky: “She’s bummed ‘cause I snaked her last bagel.”

10. David Morgan: “Stop! Stop. Where did you go? You just took off after school. Do you know how worried I’ve been?”

Stoney Brown: “God, Dave, you sound like my mom.”

Stoney Brown: “Ya know what, Dave, just chill, ’cause you know why? Link and I had a stoney time at the mountain.”

David Morgan: “You took him to mega mountain? Are you crazy?”

Stoney Brown: “Yeah, ’cause they’re ridin’ the vapor in reverse.”

David Morgan: “They are?”

Stoney Brown: “Well, he’s got the buff spikes chillin’ on top of his melon, obviously, right? Dude, he’s checking her cheeks! Oh, oh! He’s got the serious beak, and his own personal holding company full of fundage, bro, that he wheezes off of ma—ma—jor.”

Stoney Brown: “Eighteen-inch bi’s. Mine are only four—.”

David Morgan: “Besides that.”

Stoney Brown: “Dave, it wasn’t meant to happen. Come on; I’ll go buy you some ho-ho’s.”

Encino Man Quotes to Give You a Glimpse of Their Friendship

15. “Robyn wouldn’t piss on your gums if your teeth were on fire.” – Matt Wilson

16. Stoney Brown: “Link, you’re probably used to eatin’ twigs, but here in the USA we have what you call the four basic food groups—and Link, this is not one of them. First group, the dairy group: milk duds. You hide these under your pillow, so your mom doesn’t find them. If she does, you’re tweaked, bro. Second group, fruit group, sweet tarts: these are outratisally citrusy. Keep rollin’. Third group, vegetable group: corn, nuts. Man, you buy these by the pound. Meat group! These are my favorites. Hey! Equality, equality: 50-50, okay? Now for drinks, Slurpees. This is what put this place on the map, bro.”

Stoney Brown: “Kashmir, Raji, why don’t you just chill okay? ‘Cause, we’re going to the mountain, and we decided before we go we’d wheeze the juice.”

Kashmir: “No buts, chill! Get out of my store!”

17. “Gazongas? I think he was saying he likes your cones.” – David Morgan

20. “Figures, hot on the outside, icycle in the middle. Two minutes.” – Stoney Brown

What’s the Main Driving Force Behind Your Desire to Be Popular?

In the movie, Dave and Stoney had been longing for popularity. When they found Link, they saw it as an opportunity to finally become the coolest kids in school.

Link’s bizarre behavior and skills shot them to fame, which also caused a fight between the two friends. As in real life, popularity could tear even family members apart. However, in Encino Man, the two friends overcame their issues; Link even became like a family member to them!

More often than not, people tend to see their worth based on the acceptance they get from others. But, the truth is, we must like and love ourselves first. We don’t need other people’s approval of us.

Our family and friends are there to make us feel that we’re more than enough. There’s no need to look elsewhere. At the end of the day, it is them and ourselves who know the real us and accept us for who we truly are.

So, even though there are perks to fame, remember that it’s not all that it’s been cracked up to be. With that, we hope this list of quotes was able to encourage you not to seek validation from others. Instead, focus on being more accepting of yourself!