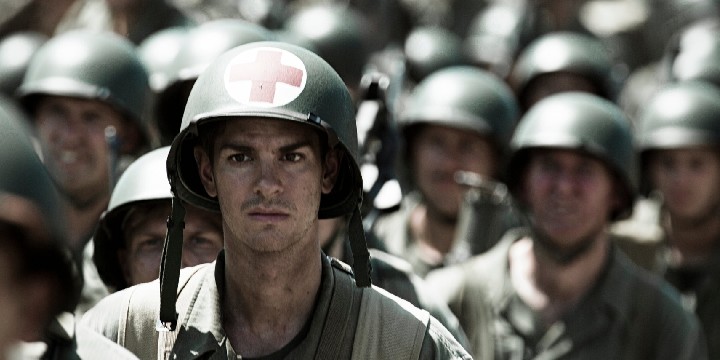 These top Hacksaw Ridge quotes will help you remain steadfast whenever anything tempts you to go astray.

War is bloody. It’s filled with violence, brutality, and unforgiving adversaries. However, in Hacksaw Ridge, in the middle of all the chaos, one man stands out above the rest—Desmond Doss.

Desmond Doss was a United States Army corporal and medic who refused to bear arms, even when he was stationed in Okinawa during one of the bloodiest battles of World War II. Everyone around him was taking lives left and right, but instead of doing that, he wanted to save lives. Desmond had complete faith in God and believed they would win even if he didn’t use violence.

Hacksaw Ridge allows us to get a glimpse of his backstory and the life he lived during the war. It also provides a better understanding of Desmond’s personality.

So, read on to find the best quotes from the movie!

And don’t forget to check out these Schindler’s List quotes and Gangs of New York quotes.

1. “While everyone else is taking life, I’m going to be saving it.” – Desmond Doss

2. “With the world so set on tearing itself apart, it doesn’t seem like such a bad thing to me to want to put a little bit of it back together.” – Desmond Doss

3. “You don’t win wars by giving up your life.” – Captain Jack Glover

4. “It isn’t right that other men should fight and die, that I would just be sitting at home, safe. I need to serve. I got the energy and the passion to serve as a medic, right in the middle with the other guys. No less danger, just—while everybody else is taking life, I’m going to be saving it.” – Desmond Doss

5. “But I don’t know how I’m going to live with myself if I don’t stay true to what I believe.” – Desmond Doss

6. “Most of these men don’t believe the same way you do. But they believe so much in how much you believe.” – Captain Jack Glover

7. “I have to enlist. I can’t stay here while all of them go fight for me.” – Desmond Doss

8. “I fell in love with you because you weren’t like anyone else, and you didn’t try to be.” – Dorothy Schutte

10. “Have you not heard? The Lord is the everlasting God, the Creator of the ends of the Earth. He will not grow tired or weary, and His understanding no one can fathom. He gives strength to the weary and increases the power of the weak. Even youths grow tired and weary, and young men stumble and fall. But those who hope in the Lord will renew their strength. They will soar on wings like eagles. They will run and not grow weary. They will walk and not be faint.” – Desmond Doss

Hacksaw Ridge Quotes to Motivate You

11. “I’ve done everything they asked me, except this one thing, and I’m being treated like a criminal just ’cause I won’t kill.” – Desmond Doss

12. Smitty Ryker: “After what we’ve just been through, any sane man would be screaming for a weapon.”

Desmond Doss: “Well, I never claimed to be sane.”

Sergeant Howell: “Hell, yes. That or a bullet.”

16. “All I saw was a skinny kid. I didn’t know who you were. You’ve done more than any other man could’ve done in the service of his country. Now, I’ve never been more wrong about someone in my life. I hope one day you can forgive me.” – Captain Jack Glover

17. Sergeant Howell: “Gentlemen! I want you to meet Private Desmond Doss. Apparently, Private Doss does not believe in violence. He does not practice violence. He will not even deign to touch a weapon. You see, Private Doss is a conscientious objector. So I plead with you, do not look to him to save you on the battlefield, because he will undoubtedly be too busy wrestling with his conscience to assist.”

Sergeant Howell: “Private, as you were! Now I realize that some of you might have strong feelings about this. It is what we men fight for. To defend our rights, and to protect our women and children. Even if Private Doss’s beliefs might cause women and children to die. So I will expect everyone in this company to give Private Doss the full measure of respect he is due for the short time that he will be with us.”

Captain Jack Glover: “You know quite a bit of killing does occur in a war?”

Captain Jack Glover: “I mean, that is the essential nature of war.”

19. Sergeant Howell: “This isn’t good for anybody.”

Desmond Doss: “Sure ain’t what I signed up for.”

Sergeant Howell: “It’s not about what you signed up for. It’s about the lives of every man in here. And yours, son. It’s time to quit this. Finish getting dressed, and I’ll walk you down.”

21. Sergeant Howell: “I have seen stalks of corn with better physiques. Makes me want to pull an ear off, Private! Can you carry your weight?”

Sergeant Howell: “It should be easy for you, then! Corporal!”

Sergeant Howell: “Make sure you keep this man away from strong winds.”

22. Prosecutor: “There is only one question that any military court needs to ask of the accused: do you deny disobeying Col. Sangston’s direct orders?”

Judge: “Why are you contesting it, then? Why is it so important to you, given your refusal to even touch a weapon to serve in a combat unit?”

Desmond Doss: “Because when the Japanese attacked Pearl Harbor, I took it personally. Everyone I knew was on fire to join up, including me. There were two men in my hometown declared 4-F unfit, they killed themselves ‘cause they couldn’t serve. Why, I had a job in a defense plant, and I could’ve taken a deferment, but that ain’t right.”

Captain Jack Glover: “What exactly is the problem?”

Desmond Doss: “No problem, just a mistake, sir. I told the Army when I joined up.”

Captain Jack Glover: “Because the United States Army does not make mistakes. So if there’s a problem, you must be that problem.”

24. “It looks much worse than it is. Girls will still want to kiss you.” – Desmond Doss

Smitty Ryker: “Of course, you don’t.”

Do You Think You Can Remain as Steadfast as Desmond Doss?

Imagine standing in the middle of a battlefield with no weapons. Wouldn’t that be a scary situation to think of? However, in Hacksaw Ridge, Desmond Doss did precisely that.

He’s famous for receiving the Congressional Medal of Honor despite not bearing any arms with him during the war. Although he only had his faith as armor, he could save many men. He was determined to save lives—not end them—which led to his success.

Being stuck in the same situation as Desmond Doss, it’s easy to feel helpless. Following that, helplessness makes our moral compass loose and shakes off our values. However, in Hacksaw Ridge, we learn how important it is to anchor ourselves with our values, faith, and beliefs to succeed.

We’ll be tempted, time and time again, to stray from our path. It’s easier said than done, but don’t let go of hope. Believe in your values and know they will save you from whatever challenge or roadblock you face.

Let Desmond Doss’s determination inspire you to do the same in life. Remember, our values serve as our compass in life. Without them, we’ll be lost, and our identity will never shine!