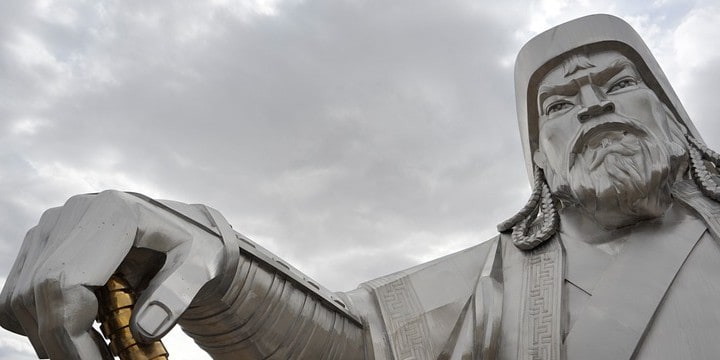 As a man shaped by a harsh and brutal environment, it’s all about power, conquest, and success—and these can all be seen in this collection of Genghis Khan quotes.

Genghis Khan is a name known all throughout the world.

He is a legendary figure in ancient Mongolian and Chinese history with military and political achievements that were unparalleled during his time.

In this collection, we’re bringing you his top 50 quotes that we think will help you conquer everything in your path.

And make sure to check out these war quotes.

1. “I am the punishment of God. If you had not committed great sins, God would not have sent a punishment like me upon you.”

3. “Who can’t stop drinking may get drunk three times a month. If he does it more often, he is guilty.”

4. “The greatest happiness is to vanquish your enemies, to chase them before you, to rob them of their wealth, to see those dear to them bathed in tears, to clasp to your bosom their wives and daughters.”

5. “An action committed in anger is an action doomed to failure.”

7. “There is no value in anything until it is finished.”

8. “To get drunk twice a month is better; once, still more praiseworthy; but not to drink at all—what could be better than this?”

9. “Conquering the world on horseback is easy; it is dismounting and governing that is hard.”

10. “A man’s greatest joy is crushing his enemies.”

11. “Every man has his use, even if only to gather dried cow dung in the Gobi for fuel.”

12. “How can one withdraw? Even if we die, let us challenge their boasts. Eternal Heaven, you be the judge!”

14. “It is not sufficient that I succeed—all others must fail.”

15. “Come and sip from the cup of destruction.”

16. “The strength of a wall is neither greater nor less than the courage of the men who defend it.”

18. “One arrow alone can be easily broken, but many arrows are indestructible.”

19. “All who surrender will be spared; whoever does not surrender but opposes with struggle and dissension, shall be annihilated.”

20. “Not even a mighty warrior can break a frail arrow when it is multiplied and supported by its fellows.”

21. “The pleasure and joy of man lies in treading down the rebel and conquering the enemy—in tearing him up by the root, in taking from him all that he has.”

23. “It will be easy to forget your vision and purpose one you have fine clothes, fast horses, and beautiful women.”

24. “But my life was too short to achieve the conquest of the world. That task is left for you.”

25. “With Heaven’s aid, I have conquered for you a huge empire.”

26. “As for the clothes I wear and the food I eat, I shall have the same as cowherds and grooms and I shall treat my soldiers as brothers.”

27. “Heaven grew weary of the excessive pride and luxury of China.”

28. “A person is more work to break his enemies, drive them before him, and of them all is to hear the screams of those they loved.”

29. “Despite all expectations, the time of my last campaign and of my passing is near.”

Genghis Khan Quotes on Nature and the World

30. “Mother Earth is broad, and her rivers and waters are numerous.”

31. “I leave you the greatest empire in the world, but your preserving it depends upon your remaining always united. If discord steals in among you all will most assuredly be lost.”

32. “I am from the Barbaric North. I wear the same clothing and eat the same food as the cowherds and horse-herders. We make the same sacrifices and we share our riches.”

33. “In the space of seven years, I have succeeded in accomplishing a great work and uniting the whole world in one Empire.”

36. “One of the joys of travel is visiting new towns and meeting new people.”

37. “As my calling is high, the obligations incumbent upon me are also heavy; and I fear that in my ruling there may be something wanting.”

38. “Be of one mind and one faith—that you may conquer your enemies and lead long and happy lives.”

40. “If you insult the mother who gave you your life from her heart, if you cause her love for you to freeze up, even if you apologize to her later, the damage is done.”

41. “Without the vision of a goal, a man cannot manage his own life, much less the lives of others.”

42. “I’m going by the law, so that peace and happiness in the world are hard and fast rules.”

43. “Even when a friend does something you do not like, he continues to be your friend.”

44. “I wish to die at home. Let not my end disarm you, and on no account weep for me, lest the enemy be warned of my death.”

45. “Remember, you have no companions but your shadow.”

46. “Let there be between us a firm treaty of friendship, amity, and peace; and let traders and caravans on both sides come and go.”

47. “Perhaps my children will live in stone houses and walled towns—not I.”

48. “As long as you brothers support one another and render assistance to one another, your enemies can never gain victory over you.”

49. “Just as God gave different fingers to the hand, so has He given different ways to men.”

50. “I will rule them by fixed laws so that rest and happiness shall prevail in the world.”

Did These Genghis Khan Quotes Motivate You to Work Hard to Succeed Over Your Own Personal Conquests?

With a relatively small army, it might seem that Genghis Khan’s military isn’t such a big threat for its neighboring countries.

However, because of his clever battle tactics and a keen mind for strategy, leadership, and psychology, he became one of the most feared leaders during his time.

He was brutal, but clearly a very effective leader. He had a clear goal and vision, and he had the power to influence and inspire loyalty among his subordinates.

Because of this, no matter how difficult the challenges they faced, they all came through and succeeded together. It’s the same thing in life—be clear about your goals and treat the people around you with dignity and respect because they are the ones who can help you achieve your goals.

Do you think Genghis Khan was too bold and fearless? What do you think about his approach to conquer the world? Share your thoughts down below.