Looking for the best loyalty quotes? We’ve compiled a list of the top 100 famous quotes and sayings about loyalty and trust, loyalty and love, loyal friends and more.

1. “Loyalty isn’t grey. It’s black and white. You’re either loyal completely, or not loyal at all.” – Sharnay

3. “Respect is earned. Honesty is appreciated. Trust is gained. Loyalty is returned.”

4. “Loyalty is the strongest glue which makes a relationship last for a life time.” – Mario Puzo

6. “Loyalty is from above, betrayal is from below.” – Bob Sorge

7. “A person who deserves my loyalty receives it.” – Joyce Maynard

8. “Honesty and loyalty are key. If two people can be honest with each other about everything, that’s probably the biggest key to success.” – Taylor Lautner 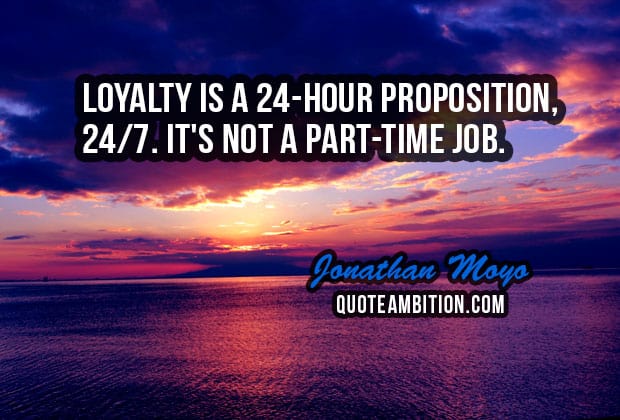 12. “Loyalty that is bought with money, may be overcome by money.” – Seneca

13. “Nothing is more noble, nothing more venerable, than loyalty.” – Cicero

14. “The whole point of loyalty was not to change: stick with those who stuck with you.” – Larry McMurtry

15. “The only true test of loyalty is fidelity in the face of ruin and despair.” – Eric Felten

16. “Staying with someone that doesn’t appreciate you isn’t loyalty, it’s stupidity.”

17. “Don’t let your loyalty become slavery. If they don’t appreciate what you bring to the table, let them eat alone.”

19. “My whole thing is loyalty. Loyalty over royalty; word is bond.” – Fetty Wap

20. “Loyalty is the pledge of truth to oneself and others.” – Ada Velez-Boardley

21. “One of the things that makes me who I am is the loyalty I have to people I hold close to my heart.” – Simone Elkeles 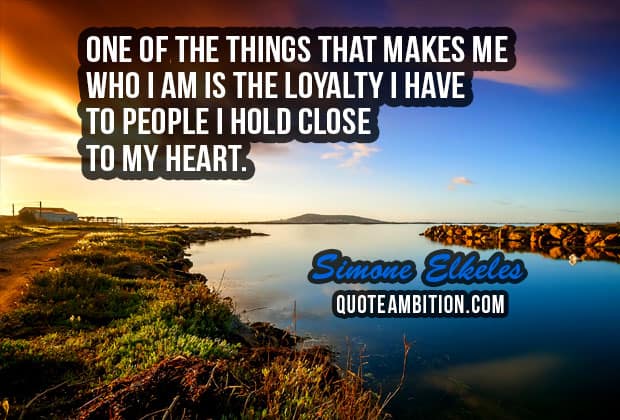 22. “Loyalty is a characteristic trait. Those who have it, give it free of charge.” – Ellen J. Barrier

24. “Loyalty is still the same, whether it win or lose the game; true as a dial to the sun, although it be not shined upon.” – Samuel Butler

25. “Unless you can find some sort of loyalty, you cannot find unity and peace in your active living.” – Josiah Royce

26. “If you cheat on a girl that’s willing to do anything for you, you actually cheated yourself out of true loyalty.”

27. “Be loyal and trustworthy. Do not befriend anyone who is lower than yourself in this regard.” – Confucius

28. “It gives me strength to have somebody to fight for; I can never fight for myself, but, for others, I can kill.” – Emilie Autumn

29. “Repeat business or behavior can be bribed. Loyalty has to be earned.” – Janet Robinson

30. “Loyalty means nothing unless it has at its heart the absolute principle of self-sacrifice.” – Woodrow T. Wilson

31. “You cannot buy loyalty; you cannot buy the devotion of hearts, minds, and souls. You have to earn these things.” – Clarence Francis 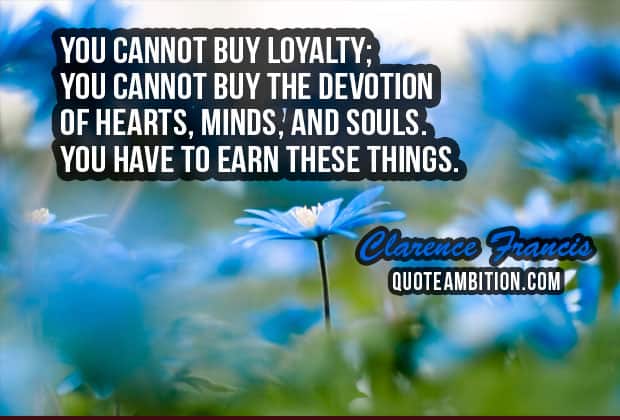 32. “A successful life is not an easy life. It is built on strong qualities, sacrifice, endeavor, loyalty and integrity.” – Grant D. Searchfield

33. “The only people I owe my loyalty to are those who never made me question theirs.”

34. “We are all in the same boat, in a stormy sea, and we owe each other a terrible loyalty.” – G.K. Chesterton

35. “What makes a woman beautiful is her loyalty to and her friendships with other women, and her honesty with men.” – Vanessa Marcil

39. “Loyalty to an unjust cause is a perversion of honor.”

40. “Total loyalty is possible only when fidelity is emptied of all concrete content, from which changes of mind might naturally arise.” – Hannah Arendt

41. “Loyalty means I am down with you whether you are wrong or right, but I will tell you when you are wrong and help you get it right.” 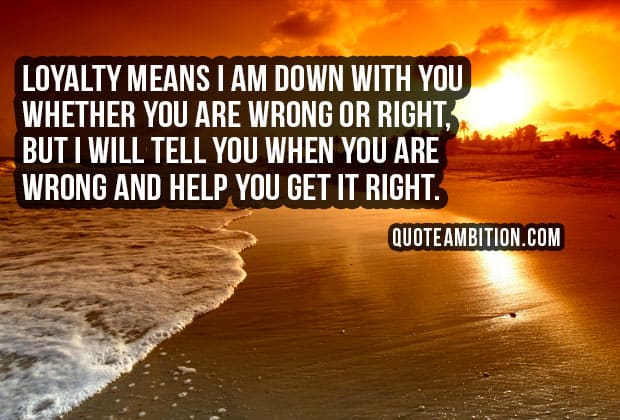 42. “Where there is loyalty, weapons are of no use.” – Paulo Coelho

43. “Those who don’t know the value of loyalty can never appreciate the cost of betrayal.”

45. “When you get married, your loyalty, first and foremost, is to your spouse, and to the family that you create together.” – Phil McGraw

48. “I place an enormous premium on loyalty. If someone betrays me, I can forgive them rationally, but emotionally I have found it impossible to do so.” – Richard E. Grant

51. “If put to the pinch, an ounce of loyalty is worth a pound of cleverness.” – Elbert Hubbard

52. “Loyalty means giving me your honest opinion, whether you think I’ll like it or not. Disagreement, at this state, stimulates me. But once a decision is made, the debate ends. From that point on, loyalty means executing the decision as if it were your own.” – General Colin Powell

53. “You have to move in life, but the loyalty you develop in a community is always remembered. But if you leave, you don’t pick it up in the next town. It’s not an add-on, you know, because you lose what you had.” – Richard DeVos

55. “I think a good friend, to me, is all about trust and loyalty. You don’t ever want to second-guess whether you can tell your friend something.” – Lauren Conrad

56. “What you can’t buy is the loyalty that comes through our dedicated crewmembers.” – David Neeleman

57. “Within the hearts of men, loyalty and consideration are esteemed greater than success.” – Bryant H. McGill 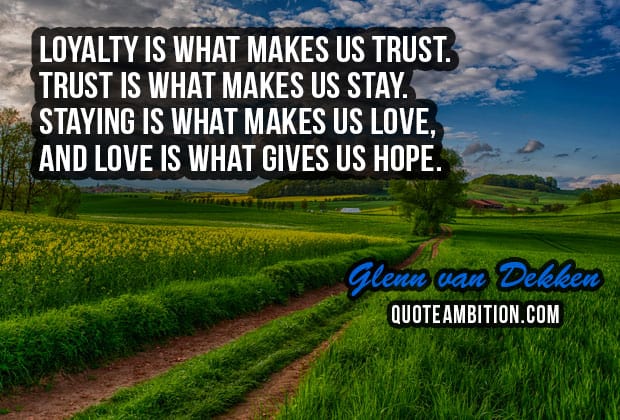 62. “Loyalty and friendship, which is to me the same, created all the wealth that I’ve ever thought I’d have.” – Ernie Banks

63. “I learned from Mr. Wrigley, early in my career, that loyalty wins and it creates friendships. I saw it work for him in his business.” – Ernie Banks

64. “Within the hearts men, loyalty and consideration are esteemed greater than success.” – Bryant H. McGill

65. “Loyalty is the highest virtue taught by abusers, and used as a control tool.” – Dr. Bill Tollefson

66. “Love is friendship that has caught fire. It is quiet understanding, mutual confidence, sharing and forgiving. It is loyalty through good and bad times. It settles for less than perfection and makes allowances for human weaknesses.” – Ann Landers

67. “Loyalty cannot be blueprinted. It cannot be produced on an assembly line. In fact, it cannot be manufactured at all, for its origin is the human heart-the center of self-respect and human dignity. It is a force which leaps into being only when conditions are exactly right for it-and it is a force very sensitive to betrayal.” – Maurice R. Franks

68. “Trust is a big word for me. Loyalty and trust, for me, are everything. It’s the core of what I’m about and what the people around me hopefully are about. It’s a certain thing that gives you a sense of security. It’s the biggest factor in everything I do.” – Tommy Mottola

70. “The highest spiritual quality, the noblest property of mind a man can have, is this of loyalty … a man with no loyalty in him, with no sense of love or reverence or devotion due to something outside and above his poor daily life, with its pains and pleasures, profits and losses, is as evil a case as man can be.” – Algernon Charles Swinburne 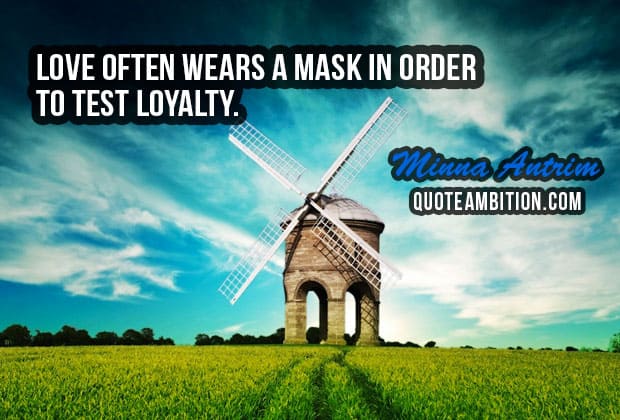 72. “I look for these qualities and characteristics in people. Honesty is number one, respect, and absolutely the third would have to be loyalty.” – Summer Altice

73. “I take things like honor and loyalty seriously. It’s more important to me than any materialistic thing or any fame I could have.” – Lloyd Banks

75. “Employee loyalty begins with employer loyalty. Your employees should know that if they do the job they were hired to do with a reasonable amount of competence and efficiency, you will support them.” – Harvey Mackay

76. “If you’re not loyal to your team, you can get by for a while, but eventually you will need to rely on their loyalty to you, and it just won’t be there.” – Tim Schafer

77. “”Loyalty to petrified opinion never yet broke a chain or freed a human soul.” – Mark Twain

78. “What is a disloyal act? A person is disloyal if he treats you as a stranger when, in fact, he belongs to you as a friend or partner. Each of us is bound to some special others by the invisible fibers of loyalty.” – Lewis B. Smedes

79. “When people show loyalty to you, you take care of those who are with you. It’s how it goes with everything. If you have a small circle of friends, and one of those friends doesn’t stay loyal to you, they don’t stay your friend for very long.” – John Cena

80. “The test of good citizenship is loyalty to country.” – Bainbridge Colby

81. “Loyalty is something you give regardless of what you get back, and in giving loyalty, you’re getting more loyalty; and out of loyalty flow other great qualities.” – Charles Jones 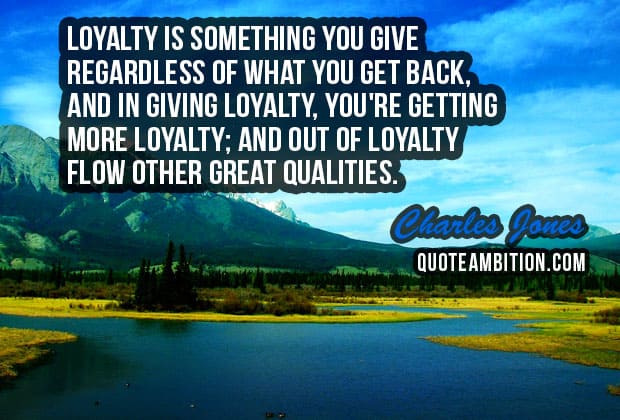 82. “The only honest reaction and true loyalty we get is from our animals. Once they’re your friends, you can do no wrong.” – Dick Van Patten

83. “Confidentiality is a virtue of the loyal, as loyalty is the virtue of faithfulness.” – Edwin Louis Cole

84. “What about passion, dedication, loyalty? Can a robot provide those? No! On the other hand, it’s easier to retire a robot when its day is done.” – Stanley Bing

85. “In the Olympic Oath, I ask for only one thing: sporting loyalty.” – Pierre de Coubertin

86. “I’m not a big fan of having my loyalty called into question.” – Chris Eigeman

87. “The person who always says he is loyal is actually the most disloyal of all.”

88. “Call it loyalty, call it what you want, but I suppose I’ve got people up here who I’m really tight with, we’ve made a lot of great bonds over the last few years and I’ve got people in my corner I can trust.” – Jonathan Brown

89. “As an artist your first loyalty is to your art. Unless this is the case, you’re going to be a second-rate artist.” – Margaret Atwood

90. “What little success I may have won in life I attribute to the loyalty I had for a dear old friend who was my first steel master, whom you perhaps have never heard of: Captain Bill Jones.” – Charles M. Schwab

91. “All men are loyal, but their objects of allegiance are at best approximate.” – John Barth 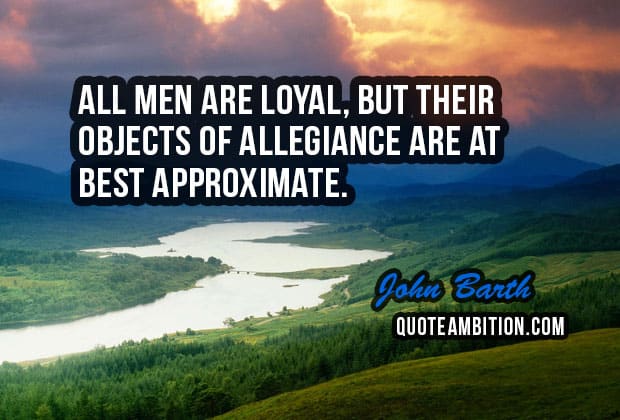 92. “I don’t have an issue with marrying an actor, though it’s definitely tough. I work with actors and interact with star wives, and I don’t know how they do it. Loyalty is a very important factor for me, and I need to be in a relationship where the person will complete me and fill me up.” – Deepika Padukone

94. “In that portion of time where my parents were together, I got to see great love, great loyalty, and teamwork.” – Kimberly Guilfoyle

95. “I love loyalty, and I love paying back my end of loyalty, you know what I’m saying? I love making it full circle.” – BJ the Chicago Kid

96. “Every great leader knows that his or her role comes with responsibility for those who follow him or her, and in ensuring they provide value in return for their loyalty.” – Lewis Howes

97. “Loyalty to the true, core values and roots of democracy is what makes a true patriot, not loyalty to a symbol of the country.” – Cindy Sheehan

98. “I believe in love, and I have no trouble with commitment or loyalty; that’s never been a problem for me.” – Liberty Ross

99. “I used to advertise my loyalty and I don’t believe there is a single person I loved that I didn’t eventually betray.” – Albert Camus

100. “Justice, without loyalty, is a vicious formalism.” – Josiah Royce 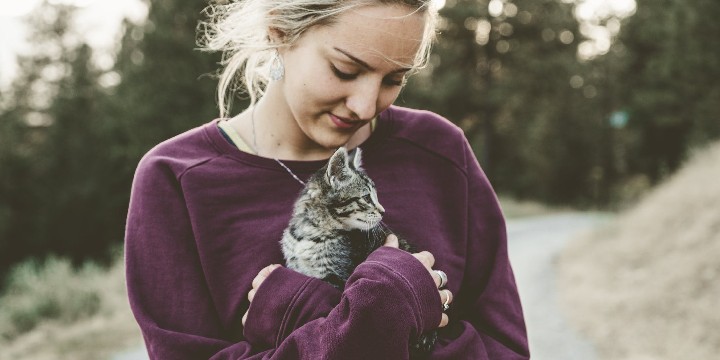 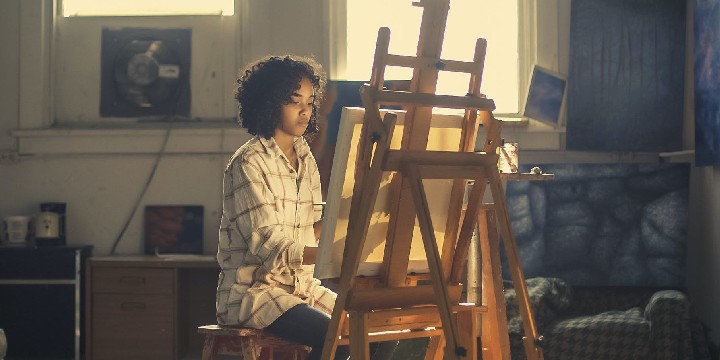 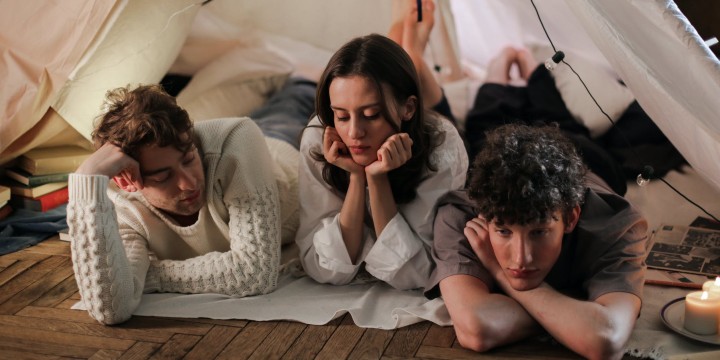 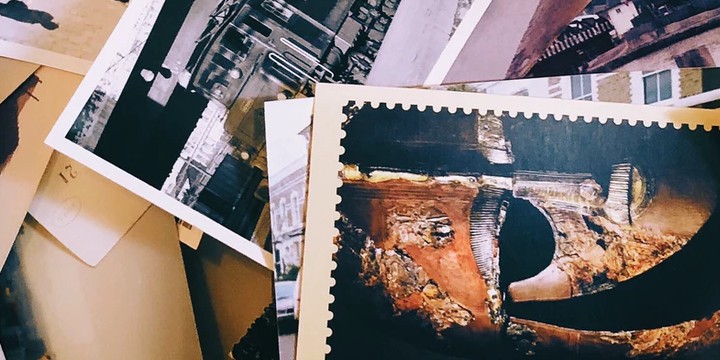 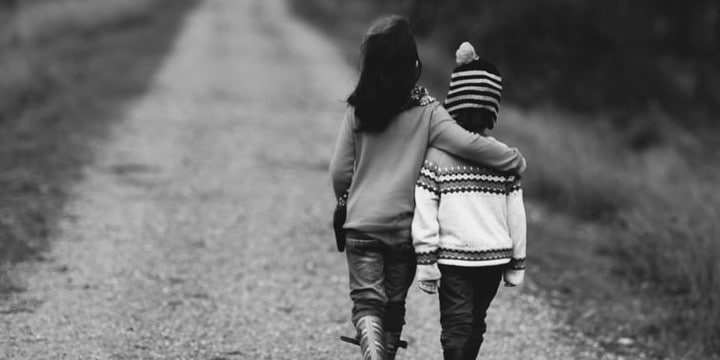