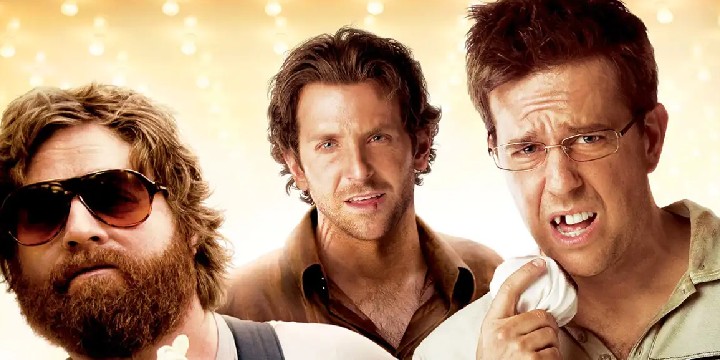 If you want proof that friends can create long-lasting and life-changing memories, read these The Hangover quotes that’ll surely make you believe!

The Hangover is a 2009 comedy movie about the friendship of Phil, Stu, Alan, and Doug. Doug will get married, so their group goes to Las Vegas for an unforgettable bachelor party.

But, it wasn’t all fun; everything was a mess, some things were missing, and they saw strange and weird stuff inside their room! Worse, Doug also vanished! With only a few clues, they search for Doug, hoping they’ll find him in time to attend his wedding.

The Hangover is definitely a must-watch because of the characters’ comedic interactions. However, this movie will also provide wisdom on friendship and life. So, read through this collection and find some meaningful lessons hidden in this comedy movie!

And don’t forget to check out these Bridesmaids quotes and Pineapple Express quotes.

1. “What happens in Vegas, stays in Vegas. Except for herpes. That sh*t will come back with you.” – Sid Garner

Phil Wenneck: “Oh, f*ck! I keep forgetting about the g*dd*mn tiger! How the f*ck did he get in there?”

Stu Price: “I don’t know because I don’t remember.”

Alan Garner: “One of the side effects of roofies is memory loss.”

Stu Price: “You are literally too stupid to insult.”

3. Stu Price: “Why do you think we can’t remember anything from last night?”

Phil Wenneck: “Because obviously, we had a great f*cking time!”

4. “Would you please put some pants on? I feel weird having to ask you twice.” – Phil Wenneck

5. “I tend to think of myself as a one-man wolfpack.” – Alan Garner

6. Alan Garner: “It says here we should work in teams. Who wants to be my spotter?”

Doug Billings: “I don’t think you should be doing too much gambling tonight, Alan.”

Alan Garner: “Gambling? Who said anything about gambling? It’s not gambling when you know you’re gonna win. Counting cards is a foolproof system.”

Alan Garner: “Yeah, maybe after 9/11, where everybody got so sensitive. Thanks a lot, Bin Laden.”

7. Phil Wenneck: “You’re not really wearing that, are you?”

Phil Wenneck: “The man-purse. You actually gonna wear that, or are you guys just f*cking with me?”

Alan Garner: “It’s where I keep all my things. Get a lot of compliments on this. Plus, it’s not a purse; it’s called a satchel. Indiana Jones wears one.”

Phil Wenneck: “So does Joy Behar.”

9. Stu Price: “She is wearing my grandmother’s Holocaust ring.”

Alan Garner: “I didn’t know they gave out rings at the Holocaust.”

The Hangover Quotes for a Day Full of Laughter

Stu Price: “Alan, are you sure you didn’t see anyone else in the suite?”

Alan Garner: “Yeah, I checked all the rooms. No one’s here. Check its collar or something.”

12. Alan Garner: “Can I ask you another question?”

Alan Garner: “You probably get this a lot. This isn’t the real Caesar’s Palace, is it?”

13. “What do tigers dream of when they take their little tiger snooze? Do they dream of mauling zebras or Halle Berry in her Catwoman suit? Don’t you worry your pretty striped head; we’re gonna get you back to Tyson and your cozy tiger bed. And then we’re gonna find our best friend Doug, and then we’re gonna give him a best friend hug. Doug, Doug, oh, Doug, dougie, dougie, Doug, Doug! But if he’s been murdered by crystal meth tweakers, well then we’re sh*t out of luck.” – Stu Price

14. “And we’re the three best friends that anyone could have!” – Alan Garner

15. “Four of us wolves, wandering the desert together in Las Vegas, looking for strippers and cocaine.” – Alan Garner

16. “Whatever happens tonight, I won’t ever speak a word of it. Seriously. I don’t care what happens. I don’t care if we kill someone. You heard me; it’s Sin City.” – Alan Garner

More The Hangover Quotes That Are Worth Reading

18. “Jesus, he’s like a gremlin. Comes with instructions and sh*t.” – Phil Wenneck

Phil Wenneck: “Pull yourself together, bro.”

Alan Garner: “Not at the table, Carlos.”

20. Stu Price: “Why are you peppering the steak? You don’t know if tigers like pepper.”

Did This Collection Inspire You to Find Your Wolfpack?

Life wouldn’t be as exciting and enjoyable as it is now without friends who will be there with you through the highs and the lows. In The Hangover, the four friends did make a mess of everything, but they also tried hard to put everything back together in one piece. Ultimately, Doug could also attend his wedding because his wolfpack never gave up on finding him.

Sometimes, all we need is a group of people who will be there for us through happiness and hardship. You may not notice it, but friends significantly impact who you are and how you live your life. So, if you have already found your pack, make an effort to keep them.

Remember, friends will provide you with experiences that will last for a lifetime! They’ll also push you to overcome any hardships that come your way. After all, no one would be able to make it through life unscathed without real friends to help navigate life.

Hopefully, these The Hangover quotes were able to make you realize how friendship contributes to our happiness. Whenever you need a pick-me-up or some more lessons on friendship, revisit our list of quotes!