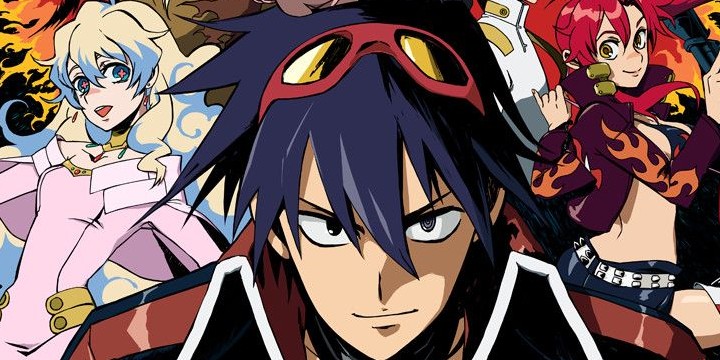 Buckle up because we bring you the best Gurren Lagann quotes to believe in yourself and motivate you to reach your dreams.

It features the fictional state of Earth colonized by Spiral King, who coerces humanity to take shelter in isolated villages.

It received 100% on 16 reviews of Rotten Tomatoes and a whole ‘A’ rating in Anime News Network, considering it as one of the liveliest series of the decade.

Unsurprisingly, Gurren Lagann succeeded in influencing Japanese and American popular culture because of its impeccable scriptwriting.

So, if you are a fan that wants to revisit their most iconic lines or want to watch this classic anime, then this collection is perfect for you!

And don’t forget to check out these anime quotes and Cowboy Bebop quotes.

1. “Don’t believe in yourself. Believe in me! Believe in the Kamina who believes in you!” – Kamina Jiha

3. “The dreams of those who’ve fallen! The hopes of those who’ll follow! Those two sets of dreams weave together into a double helix! Drilling a path towards tomorrow! And that’s Tengen Toppa! That’s Gurren Lagann!” – Simon Giha

4. “The dreams we left behind will open the door!” – Yoko Littner

5. “We’re gonna show you the power of the human race!” – Simon Giha

6. “God gave us eyes at the front of our heads so we can look forward to the future.” – Kamina Jiha

7. “Your drill is the drill that will pierce the Heavens!” – Kamina Jiha

8. “Your back is your one big blind spot.” – Yoko Littner

9. “Don’t be distracted by the what-ifs, should-haves, and if-onlys. The one thing you choose for yourself, that is the truth of your universe.” – Kamina Jiha

11. “I don’t want to fear for a future that may not even come, to stop me from acting today.” – Simon Giha

12. “We evolve beyond the person that we were a minute before. Little by little, we advance with each turn. That’s how a drill works!” – Simon Giha

14. “When you’re scared, that’s all the more reason to move forward!” – Kittan Bachika

15. “If people’s faith in you is what gives you your power, then I believe in you with every fiber of my being!” – Nia Teppelin

17. “We, brawlers, are sustained by willpower even when mocked as reckless and crazy!” – Kamina Jiha

19. “Whether impossible or laughable, we continue to walk the path of men!” – Kamina Jiha

20. “Don’t be held back by someone else’s bullshit in fake memories. The one path you choose for yourself is the truth of your universe.” – Kamina Jiha

Gurren Lagann Quotes on Believing in Yourself

22. “I will believe! I will believe in me that believes in us, humans, and the future! This drill is my soul!” – Simon Giha

24. “The human spirit is limitless! I’ve staked everything on its greatness too!” – Nia Teppelin

25. “This is Simon’s soul! Team Dai-Gurren’s soul! Humanity’s soul and actually, it’s my soul! Do you seriously think it’s gonna be wiped out by the likes of you?” – Simon Giha

26. “Do the impossible, see the invisible.” – Herbern Lebumfacil

27. “I don’t fully understand, but it doesn’t matter why you were born or if you’re a princess. The Nia right here is you. So it’s okay if you just be yourself.” – Simon Giha

28. “Listen up, big guys! I’ll only say this once. Undefeatable, untouchable, with no regrets! Never looking back, never wavering! You can’t win against this man’s will!” – Kamina Jiha

30. “When we were trapped in that hole, there was nothing I could do. But Simon just kept on digging, believing in my show of courage. In the end, he was the one who saved me.” – Kamina Jiha

Gurren Lagann Quotes That Will Kick Reason to the Curb

31. “With a man’s soul and a strong back, go beyond the impossible and kick reason to the curb!” – Kamina Jiha

36. “This is the tale of a man who continues to search for his own path, even as fate betrays him.” – Narrator

37. “We’ll break through the heavens and dimensions!” – Simon Giha

38. “With thoughts of a man gone in my heart, I knowingly took on this impossible fight. A woman’s got her pride. With a maiden’s prayers and rage, I’ll blast you away along with your cheap trap, so prepare yourself!” – Yoko Littner

39. “People ask, ‘Why do you fight? Why do you kill? Why do you destroy?’ They will die with these questions unanswered. That is humanity’s bliss.” – Narrator

40. “I didn’t have any confidence. I thought I was living the wrong way, impatiently. Why couldn’t I go where my father could? Truthfully, I wasn’t strong enough.” – Kamina Jiha

Gurren Lagann Quotes That Will Make You a True Man

43. “I’m going to tell you something important now, so you better dig the wax out of those huge ears of yours and listen! The reputation of Team Gurren echoes far and wide. When they talk about its badass leader, the man of indomitable spirit and masculinity, they’re talking about me! The mighty Kamina!” – Kamina Jiha

44. “You best remember this, fuzzball! Combining is all about one man’s fighting spirit slamming into another!” – Kamina Jiha

45. “If this body can create a tomorrow for all spiral life, I will gladly give it.” – Lord Genome

46. “How long are you going to keep running, Simon? Now is the time to cast off the boy you used to be.” – Kamina Jiha

47. “When I feel weak, or when I lack self-confidence, I remember Simon’s back as he dug tirelessly. I wanted to become a man whose back would never break. That’s what I thought.” – Kamina Jiha

49. “We embark on the winding spiral path! The paths of man and beast intersect!” – Simon Giha

50. “If you slow us down, I’ll leave you behind, Undergrounder.” – Kamina Jiha

Gurren Lagann Quotes That Will Give You Courage

51. “Our friends’ hopes and dreams are etched into its body, transforming the infinite darkness into light! Unmatched in Heaven and Earth; one machine, equal to the gods! Super Galaxy Gurren Lagann! We’re going to show you the power of the human race.” – Simon Giha

52. “Kamina-sama will be your opponent! Believe it!” – Kamina Jiha

53. “If you become a wall that stands in my way, I’ll tear open a hole and breakthrough you every time! That’s my drill!” – Simon Giha

54. “I can’t know about somebody who isn’t here. But, you shouldn’t depend on people who aren’t here.” – Nia Teppelin

55. “Our burning blood will cut through fate!” – Viral

56. “Hey, don’t you remember you were the method to my madness? The one who made my big talk more than words? Your drill ought to be totally different from that pebble over there. Your drill is right here; you can’t keep wasting time in this place forever. What’s that drill of yours meant to do?” – Kamina Jiha

58. “Don’t underestimate us. We don’t care about time, or space, or multi-dimensional whatever! We don’t give a damn about that. Force your way down a path you choose to take and do it all yourself!” – Simon Giha

60. “You continue to struggle, even knowing what you know?” – Anti-Spiral

Gurren Lagann Quotes to Help You Increase Your Willpower

61. “Our dead friends, the sorrow of the spiral race, we’ll take in all their regrets. We’ll take it and turn it into power!” – Simon Giha

63. “My soul once drowned in a sea of despair and weariness but has reawakened!” – Spiral King

64. “How can this be? Where are you drawing all of this power from?” – Anti-Spiral

65. “He’s right! We humans used to have somebody much, much bigger than us! For his sake, we’ll keep moving forward!” – Yoko Littner

68. “The screams of life echo across the galaxy!” – Viral

69. “Now then, I’ve come to reclaim my helm! That’s what I wanted to say, but before that, put on some damn clothes!” – Viral

70. “Smashing through both karma and fate!” – Simon Giha

71. “Maybe, but it isn’t zero. And for me, that makes it the same as a hundred percent chance!” – Simon Giha

73. “Who do you think you are having two faces? You cocky bastard!” – Kamina Jiha

77. “Boasting like that is just asking for death.” – Viral

78. “I am a teacher. Pay close attention; this will be on the test. You don’t wreck buildings. You don’t take children hostage. And you don’t threaten people with violence. Okay, class dismissed. Looks like you fail!” – Yoko Littner

82. “What foolishness. You would risk the universe for the sake of a fleeting emotion?” – Anti-Spiral

83. “Never afraid of what the future holds, never regretful of the present. That’s who we are!” – Simon Giha

84. “When objects revolve at high speed, even if force is applied, the axis of revolution will always remain in a fixed position. This is one of the laws of the universe. That’s right. The faster you spin, the faster you free yourself from Earth’s gravity and seek the heavens.” – Leeron Littner

86. “I’ll tell you two things: First, any human on the surface will be completely annihilated by our Human Eradication Army. Second, that is my dinner, give it back!” – Viral

87. “I can’t miss out on something this interesting, can I? It could be that these two will change something.” – Leeron Littner

89. “That’s your limitation! You sit here closed off, blocking away other life forms like some sort of king! That’s nobody’s limitation but your own!” – Simon Giha

90. “I’ve got the best wife in the universe swing!” – Dayakka Littner

91. “We defended the universe by killing our fellow spirals and halting our own evolution.” – Anti-Spiral

92. “What are you doing? Get your ass down here and start bowing! Bow, and beg, and grovel on your knees, and just pretend to apologize to them.” – Kamina Jiha

93. “That is the path that leads to extinction. Why can’t you see the pathetic limitation of the Spiral race?” – Anti-Spiral

94. “Your deaths will be for nothing! Begone!” – Anti-Spiral

95. “How dare you do that to my precious underling punch!” – Kamina Jiha

96. “This is the real spirit of men—Cannonball Attack!” – Kamina Jiha

97. “I borrowed one of Gurren Lagann’s drills as a good luck charm! And believe me, I’m going to put it to good use!” – Kittan Bachika

98. “This is what happens when someone dies; people suffer. And yet here you are saying that two grieving parties should hurt each other! Don’t you think there might be something wrong with that?” – Nia Teppelin

100. “Infinity Big Bang Storm! Burn in the everlasting hellfire of creation! Be utterly annihilated, down to the very last scrap of DNA!” – Anti-Spiral

Which Gurren Lagann Quote Made You Stop Doubting Yourself?

Gurren Lagann is the rebellion of the people who dream under the oppressive system they were forcibly put in. The characters were made to believe that they are weak and question their capabilities. Kamina, Simon, and his gang make us trust ourselves and what the future holds.

In the modern age where teens are overly exposed to social media that shapes society’s standards, we are prone to compare ourselves with other people that brings down our confidence. Sadly, the pandemic that forces everyone to focus on the internet only worsens our self-image.

Hopefully, reading their most inspiring quotes will lift you and lighten your day. Experiencing hardships and going through them will make us strong and have a sense of purpose.

What Gurren Lagann quote is your personal favorite? Which character resonated with you? Comment your realizations below.