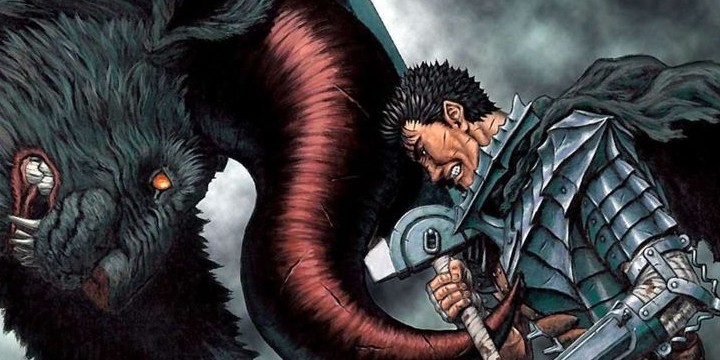 If you’re a fan of this anime and need a collection of its best quotes to keep you going, then this list of Berserk quotes will definitely fit the bill!

Berserk is a dark fantasy series based on a popular Japanese manga written and drawn by the late Kentaro Miura.

It follows the story of a wandering mercenary named Guts, who survived the betrayal of his very own best friend, Griffith.

Since then, he lived a life with the sole purpose of killing Griffith in the name of vengeance.

Although the anime has many intense and gory scenes, the plot is fantastic, intriguing, and is worth watching. Each character has depth and ambition that drive their actions—whether good or bad.

So, if you’re interested to know more about them and the lessons they impart, make sure you read through to the end.

And don’t forget to check out these anime quotes and Banana Fish quotes.

2. “Is he living his dreams in death? Or is death the end of dreams?” – Griffith

3. “You’re going to be all right. You just stumbled over a stone in the road. It means nothing. Your goal lies far beyond this. Doesn’t it? I’m sure you’ll overcome this. You’ll walk again—soon.” – Guts

5. “A dream—it’s something you do for yourself, not for others.” – Griffith

6. “The reward for ambition too great—is self-destruction.” – Guts

7. “Even if we painstakingly piece together something lost, it doesn’t mean things will ever go back to how they were.” – Guts

8. “You’re right, we are mortal and fragile. But even if we are tortured or wounded, we’ll fight to survive. You should feel the pain we feel and understand. I am the messenger that will deliver you to that pain and understanding.” – Guts

9. “In this world, some people born are like keys that move the world and exist having no connection to the social hierarchy established by man.” – Guts

13. “My place really was here. I was too foolish and stubborn to notice. But, what I truly hoped for then was here. Why do I always realize it—when I’ve already lost it.” – Guts

14. “I do not know what the future holds, but I do know this that I just cannot get enough of you.” – Guts

15. “If you’re always worried about crushing the ants beneath you—you won’t be able to walk.” – Guts

17. “Throughout my life, the moments, and people who have defined me—they have all been illuminated by sparks.” – Guts

18. “Looking up from here, it’s as if each flame were a small dream from each person. They’re like a bonfire of dreams, don’t they? I’m just a temporary visitor taking comfort from the flame.” – Guts

20. “If you’re alone—if it’s just your life, you can use it however you please. Wear yourself out, get cut to ribbons, doesn’t matter. But when there’s two, the blade grows heavy. Fighting like death doesn’t concern you becomes a thing of the past. It’s no longer just you. I threw away my way of life, relied on the strength of others, and somehow pushed on.” – Guts

21. “Look, look around carefully. Strain your eyes. At the darkness around us—at the darkness—around me. You said, ‘anywhere but here.’ This is where. Here at the border. Gathered by the winds. Those who’ve met their final destiny hanging between jealousy and regret. Those who failed swept together here. You say ‘It doesn’t matter where.’ If you follow me, this is where you’ll go! This is your Eden! You run from it. It is no Eden. If you follow me to this place the entire world is a battlefield.” – Guts

22. “People bring the small flames of their wishes together—since they don’t want to extinguish the small flame—they’ll bring that small flame to a bigger fire. A big flame named Griffith. But you know, I didn’t bring a flame with me. I think I just stopped by to warm myself by the bonfire.” – Guts

23. “In this world is the destiny of mankind controlled by some transcendental entity or law? Is it like the hand of god hovering from above? Perhaps men have no control even over their own will.” – Guts

25. “A dream can make a man feel alive, or it can kill him instead. But to simply exist just because one’s been born is the sort of notion that I hate—I can’t stand it.” – Griffith

26. “While many can pursue their dreams in solitude, other dreams are like great storms blowing hundreds, even thousands of dreams apart in their wake. Dreams breathe life into men and can cage them in suffering. Men live and die by their dreams. But long after they have been abandoned they still smolder deep in men’s hearts. Some see nothing more than life and death. They are dead, for they have no dreams.” – Griffith

27. “It is my perception that a true friend never relies on another’s dream. A person with the potential to be my true friend must be able to find his reason for life without my help. And, he would have to put his heart and soul into protecting his dream. He would never hesitate to fight for his dream, even against me. For me, a true friend is one who stands equal on those terms.” – Griffth

29. “I feel no responsibility to comrades who’ve lost lives under my command. Because they chose to fight in each battle—just as I chose this. But if there is something that—I can do for them. Something I can do for the dead—then it is to win! I must keep winning to attain my dream. The same one they clung to, and risked their lives for! To realize my dream, I will perch on top of their corpses. It is a blood-smeared dream, after all. I don’t regret or feel guilty about it. But to risk thousands of lives while never getting myself dirty. It’s not a dream that can be so easily realized!” – Griffith

30. “If you desire one thing for so long, it’s a given that you’ll miss other things along the way. That’s how it is—that’s life.” – Godo

31. “Swords are just large butcher knives, after all. Tools meant for killing people. And so I forged it, as it was described—a sword that could butcher a dragon.” – Godo

32. “Dragons are dragons because humans can’t beat ’em. So, what’s a man who beats dragons?” – Godo

33. “Mighty things, things that could kill, that’s all there was for me.” – Godo

34. “But you know, this ain’t even what you’d call a sword. It’s a meaningless slab of iron you can’t even lift, for killin’ dragons and monsters that ain’t even real. Your friend looks like he’s about to fight a dragon, though. Seems to want to fight even after losing his hand and eye.” – Godo

35. “No matter how strong, for a human to fight a monster means he has submerged his humanity and transformed himself into a greater monster.” – Schierke

36. “To think that a senseless death can create this much malice.” – Schierke

37. “I will fight back no matter how many enemies there are!” – Schierke

38. “I have reached the station I have always dreamed about! I have become an unrivaled magician!” – Schierke

41. “Whether it’s good or bad, it’s so unfortunate to wake up during a dream.” – Judeau

42. “I realized that I could never be the best, so I decided to find the man that could and serve by his side.” – Judeau

43. “I’m a jack of all trades—a little better than most at everything, but I don’t shine at anything.” – Judeau

44. “You’re messing with our only woman—you’ll pay for that.” – Judeau

45. “The world is as moonlight reflected on the water’s surface.” – Skull Knight

46. “One who does something he hates just because he’s told to—is called an errand boy.” – Guts

48. “You have the strongest armor because you are the weakest!” – Guts

49. “I’m human, the real deal, right down to the fuckin’ marrow of my bones. Don’t lump me together with you faggot-ass monsters.” – Guts

50. “Death on the battlefield comes regardless of class, royal or common. The loser must die!” – Griffith

Did These Quotes Make You Think About Your Ideals in Life?

Dreaming makes us strong, and the hope of fulfilling it makes us endure challenges that come our way. In Berserk, every character has dreams that they want to achieve; they only differ on the means and how they execute them into fruition.

While Griffith chooses to sacrifice the lives of his friends to obtain God-like status, Guts decides to stay alive and fights Griffith in the name of their fallen allies. This shows two individuals who are former comrades but end up walking different paths in life.

These two main conflicting sides shown in the anime stirred arguments from its fans about who made the right decision and who should prevail. But, as in life, it is never easy to pinpoint who is good or bad at face value. As Guts’ best quote says, “In the end, the winner is still the last man standing.”

With that, we hope you were able to learn something from this collection of quotes. Always remember that it’s good to follow your heart and dreams, but make sure you’ll not hurt anyone in the process.

Which of these Berserk quotes is your favorite? Do you have any quotes you want to add to our collection? Please, leave your comment below.